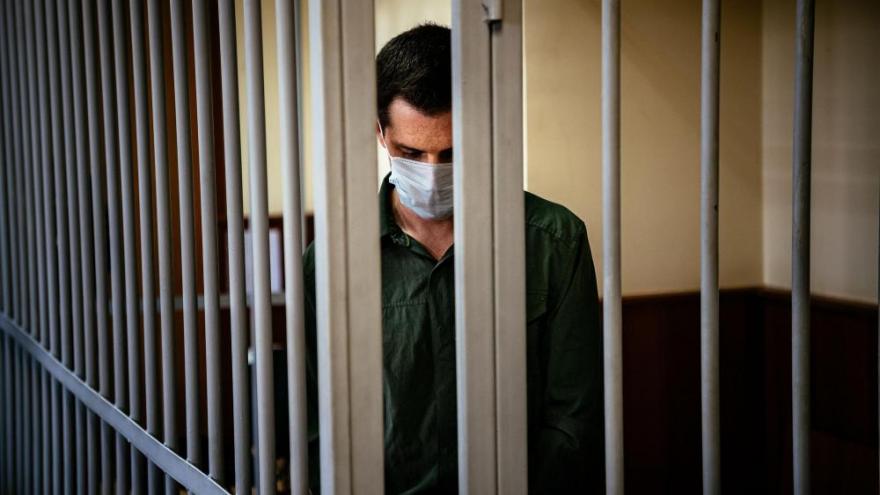 US ex-marine Trevor Reed, charged with attacking police, stands inside a defendants' cage during his verdict hearing at Moscow's Golovinsky district court on July 30, 2020.

(CNN) -- The parents of Trevor Reed, a US citizen detained in Russia, said Thursday that his health has taken a further turn for the worse, and they fear he will be sent to solitary confinement rather than to medical care.

Reed, who has been detained since 2019 and has been sentenced to nine years in prison, told his parents on a call Thursday he "is coughing up blood multiple times a day, running a fever, and still experiencing pain in his lung," according to a statement from Paula and Joey Reed.

"We believe it's likely he has tuberculosis. He also reports a broken rib because 'something fell' on him, and to make matters worse, he's being underfed," they said.

"It's hard to explain how panicked we are after hearing his voice today," his parents said.

"Trevor was told he'd be sent back to the prison 'hospital' on Friday," but his parents said that while they were on the phone, "he was summoned to the prison disciplinary 'commission,' so we fear authorities might send him back to solitary confinement instead."

His parents said they were able to tell their son they spoke with President Joe Biden about his case and they "anxiously await hearing from the White House as the President promised."

"Trevor increasingly feels left behind, and it's heartbreaking for us to hear that from our son, whose service we are so proud of," their statement said.

Biden called Paula and Joey Reed during his visit to Fort Worth, Texas, on Tuesday, shortly after driving past them in his motorcade.

A White House official said Biden called the Reeds "to reiterate his commitment to doing everything he can to bring their son home, to staying in close touch with them through his national security team and to finding a time to meet in person."

Concerns have mounted over his face -- as well as that of fellow detained Americans Paul Whelan and Brittney Griner -- amid Russia's war with Ukraine and extremely heightened tensions with the US because of it.

Elizabeth Whelan told CNN's "New Day" on Thursday that her brother is "very strong and very courageous, but the conditions in the prison camps are terrible, and Paul is maintaining his health, but it is at great cost."

Whelan was detained in 2018 and has been sentenced to 16 years in prison.

Elizabeth Whelan said she didn't know how the Russian war in Ukraine would impact her brother's case, "but the family has many sleepless nights worrying about what is going to happen."

"We certainly feel that the sanctions that are being placed on Russia are potentially a vehicle that might help Paul get home," she said.

Elizabeth Whelan said she feels "heartfelt sympathy" for the situation of WNBA player Griner, who was recently arrested in Russia for alleged drug possession.