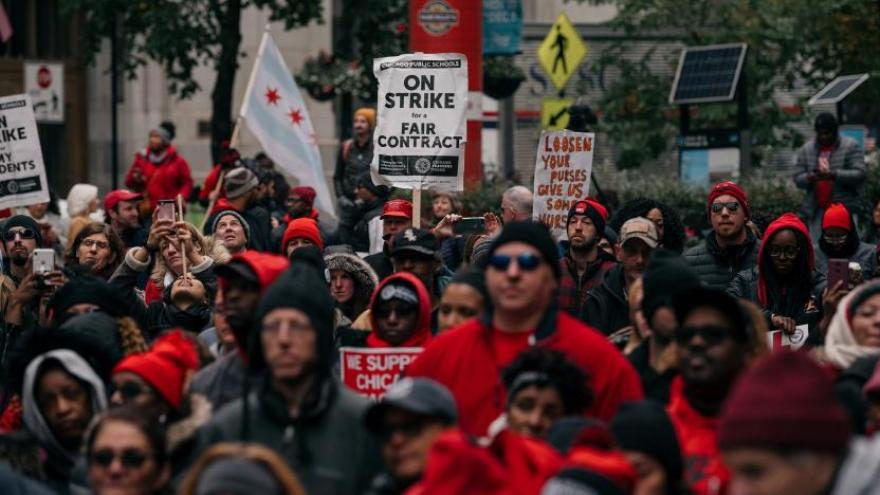 Fifteen parents of Chicago high school athletes are suing to allow their children to take part in a cross-country meet while their educators are on strike.

(CNN) -- A Chicago judge ruled Friday that cross-country runners cannot compete in a Saturday meet while their educators are on strike.

Fifteen parents filed a lawsuit Thursday against the Chicago Board of Education and the Illinois High School Association, which governs interscholastic sports.

The lawsuit asked for a temporary restraining order that would let the athletes, students at Jones College Prep High in the Loop, compete Saturday in a regional cross-country meet.

That restraining order was denied Friday.

"I had to call my son and tell him he's not competing tomorrow," attorney Kevin Sterling told CNN. Sterling is the attorney who filed the lawsuit and the father of one the school's cross-country runners. "If any positive came out of it, the entire student athlete population really rallied and came together."

The teachers strike, which on Friday was in its seventh school day, has kept hundreds of student athletes from competing in playoff state competitions, including many tennis and soccer teams.

"This genuinely is one of the parts of this process that hurts," said Jesse Sharkey, Chicago Teachers Union president.

More than 100 student athletes crowded into the Chicago courtroom during Friday's hearing, and more waited outside, to find out whether they'll be able to compete in Saturday's competition.

Students indicated during a press conference that if they lost the case they would still show up to their playoff races in protest, but would not race.

The IHSA said its strike policy is in line with Illinois State Board of Education policies.

The policy doesn't allow the students to run, due "partly to the fact that the schools are not able to provide adequate coaching," said David Bressler, speaking on behalf of the IHSA.

"You're basically saying...teachers, cross the picket lines to coach these kids," Bressler said.

Mara Warman, speaking for the school district, also said adequate staffing couldn't be provided because of the strike. "We cannot safely and equitably staff all sporting events," Warman said.

"The state tournament is where college coaches and college recruiters go to start handing out college scholarships to kids," Sterling said.

'They're the collateral damage in an adult fight'

The school system has denied other athletes the right to compete during the teachers strike, the motion for the injunction says.

The handbook governing high school sports says that if a school is on strike when an IHSA state series competition begins, students from that school cannot participate in the competition, according to the complaint.

But if students from a school had already participated in the beginning level of competition, they should be allowed to continue participating, the complaint states, citing the handbook.

The strike started October 17. The prior day, the student athletes took part in the Chicago Public League Cross Country Championship, the complaint says.

"Accordingly, the only fair and reasonable interpretation of the handbook is that the CPL Champion event constituted the 'beginning level of competition in a given state series,'" the complaint says. So, the athletes should be allowed to take part in the regional meet, despite the strike, the complaint says.

"All we're doing is asking for the kids to have the opportunity to play," Sterling said. "They're the collateral damage in an adult fight."

In a separate win for Chicago schools athletes, a Friday ruling by the IHSA board will let football teams from striking schools take part in the state playoffs, even if they haven't played the minimum number of games to qualify, provided the strike ends in time for the teams to meet the required minimum practice sessions next week.

The decision means Simeon Career Academy High School's football team, one of the state's best, may be able to make the playoffs. The school had appealed to the board to waive a requirement that teams play eight games in the season. Simeon has not been able to play during the strike.

Tens of thousands of teachers have taken to the city's streets this week, demanding more support staff, higher raises and limits to class size. Chicago Public Schools is the third biggest school district in the country.