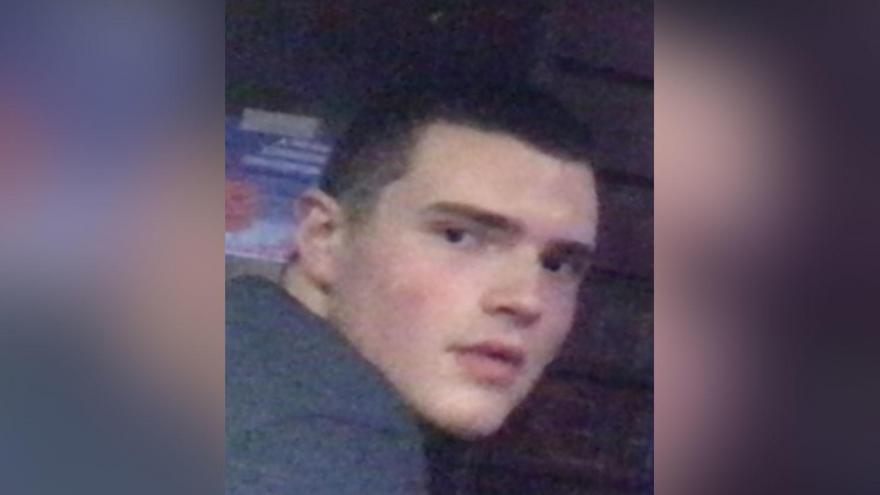 (CNN) -- Connecticut State Police had a message Tuesday for a college student suspected of killing two people four days ago before fleeing the state.

"We want you to be able to tell your story. We are here to listen to you. Your parents, your friends, all of us back here in Connecticut, want a peaceful end to this," Lt. John Aiello said at a news briefing Tuesday.

Authorities have said Peter Manfredonia, 23, is suspected of killing one man and seriously injuring another on Friday morning in Willington, Connecticut. He is also a suspect in the killing of a male acquaintance in Derby.

Aiello said that after talking with family and friends of the suspect, "We know this is not who you are."

Manfredonia's family is pleading for him to surrender.

"Peter, from your parents, who love you, please turn yourself in," the attorney for Manfredonia's family, Michael Dolan, said in a news conference Monday night.

Manfredonia, a University of Connecticut student, was last seen Sunday night in Pennsylvania. Authorities cautioned that he is "armed and dangerous."

Pennsylvania State Police determined that Manfredonia was dropped off by an Uber in front of a Walmart store in East Stroudsburg on Sunday afternoon.

"Through interviews with the driver and recovered security camera footage, Troopers were able to determine that Manfredonia walked behind Walmart and other businesses onto a set of train tracks and was still in possession of a (duffel) bag full of guns he stole from a home invasion in Connecticut," police said in a statement Tuesday morning.

"It is believed that Manfredonia does not have ties to the area and does not have a vehicle. He may attempt to solicit ride sharing services, possibly through a third party means, to flee the area," police said.

Law enforcement in three states are searching for Manfredonia, who is believed to have moved through Connecticut, New Jersey and Pennsylvania over the course of the weekend.

As Connecticut State Police cautioned the public in a Facebook post not to approach him, Manfredonia's family hopes for a more peaceful resolution.

"Now Peter, if you're listening, you are loved. Your parents, your sisters, your entire family loves you. Nobody wants any harm to come to you," Dolan said. "It is time to let the healing process begin. It's time to surrender. You have your parents and your sisters and your family's entire support."

Dolan said the Manfredonia family asked him to express their "condolences to the families and loved ones of those who have been injured and have suffered over the past several days by the events that have led to Peter's flight from the area."

Two killings and an abduction

Manfredonia is suspected of killing a 62-year-old man and injuring another man "with an edged weapon" on Friday morning in Willington, Connecticut State Police said in a statement. A few hours later they identified Manfredonia as the suspect.

The deceased man was identified Tuesday as Theodore DeMers Sr. The other man is in stable condition, state police said.

On Sunday, another man, Nicholas J. Eisle, 23, was found dead in his Derby home, according to Trooper First Class Christine Jeltema. Eisle was an acquaintance of Manfredonia, who appears to have stolen a black Volkswagen Jetta from Eisle's home, state police said.

Police believe another person was taken from the home and was later found unharmed in Paterson, New Jersey. The person, who identified Manfredonia, is back with their family in Connecticut, authorities said.

The Volkswagen that Manfredonia was believed to have been driving was found in New Jersey near the Pennsylvania border, police said.

Manfredonia is also suspected of having stolen another car, long guns and pistols from a home in Willington, on Sunday, according to police. The car was found abandoned in a state park, they said.

A UConn senior with the support of his parents

Police said a motive for the attacks is still unclear.

Manfredonia was a senior at the UConn joint School of Engineering/School of Business Management and Engineering for Management program, UConn spokeswoman Stephanie Reitz said. He was not attending summer courses and has not been living on the campus, Reitz said.

The university is in contact with state police and providing any assistance and information they can, Reitz said.

"The university expresses its deepest, most heartfelt sympathies to the victims and their families in this horrible, incomprehensible tragedy. They are all in our thoughts," said Reitz.

Dolan, the attorney, said that Manfredonia's family has been supporting him through mental health concerns.

"You won't be surprised to hear that Peter has struggled with mental health issues over the past several years," Dolan added. "He sought the help of a number of therapists and he's had the support of his parents and loved ones to help him through those struggles."

How to keep your kids safe this summer around water