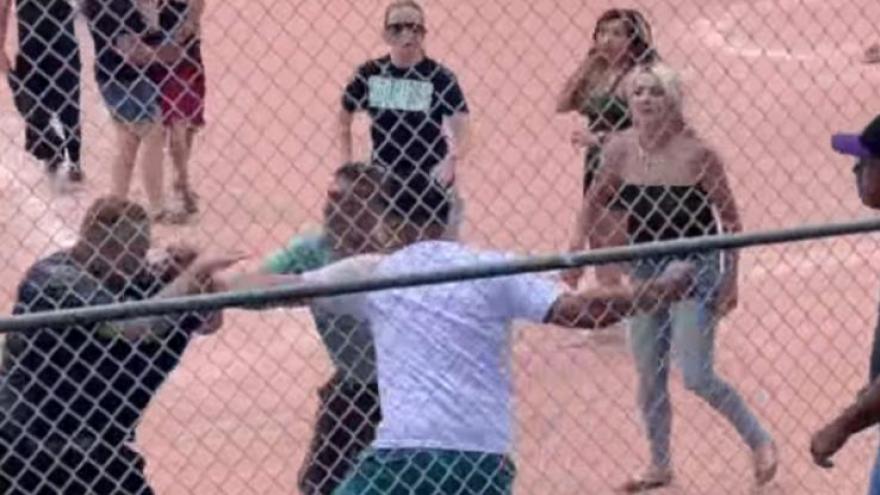 The police department is still looking for help identifying the man in the white shirt and teal shorts.

(CNN) -- Police are calling on parents to "grow up" after a fight broke out at a youth baseball game near Denver.

Parents and coaches were unhappy with a call made by the 13-year-old umpire during Saturday's game, according to the Lakewood Police Department. They then stormed the field and began punching each other as the 7-year-old players looked on.

"We were disgusted, quite frankly," Lakewood Police spokesman John Romero told HLN on Wednesday. "Baseball and 7-year-old kids, it's the parents that need to grow up here. That's the saddest part."

The police department said several people have already been cited for disorderly conduct. Multiple injuries have been reported and one person had a serious bodily injury, according to police.

Officers are still seeking any available information about the fight. They are asking for help identifying one man seen wearing a white shirt and teal shorts in the video.

The police want the video out there to let people "know that something like this is not OK," Romero said.

Romero said that this person could face assault charges for punching another man. He added that some of the people in the video could also be facing child abuse charges for putting their children in danger.

In the video, children are seen running off when the fight breaks out. Romero said he can only imagine what was going through the kids' heads.

"These are parents and coaches, people they're supposed to look up to," Romero told HLN. "People that are supposed to be mentors, and this type of thing happens."

CORRECTION: This story has been updated to reflect that the baseball game was not affiliated with the Little League program.