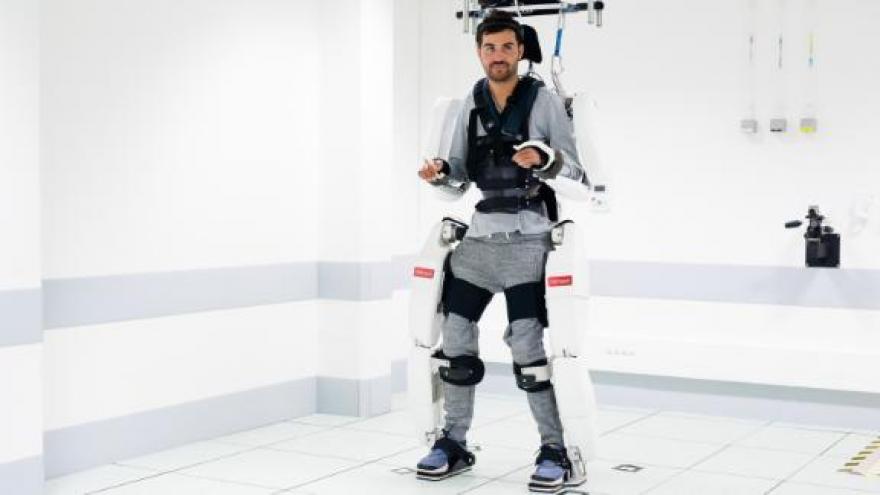 FRANCE (CNN) -- A tetraplegic man has been able to move all four of his paralyzed limbs by using a brain-controlled robotic suit, researchers have said.

The 28-year-old man from Lyon, France, known as Thibault, was paralyzed from the shoulders down after falling 40 feet from a balcony, severing his spinal cord, the AFP news agency reported.

He had some movement in his biceps and left wrist, and was able to operate a wheelchair using a joystick with his left arm.

Researchers from the University of Grenoble in France, biomedical research center Clinatec and the CEA research center implanted recording devices on either side of Thibault's head, between the brain and skin, to span the sensorimotor cortex -- the area of the brain that controls motor function and sensation.

Electrode grids collected the man's brain signals and transmitted them to a decoding algorithm, which translated the signals into movements and commanded a robotic exoskeleton to complete them.

Over a period of two years, Thibault trained the algorithm to understand his thoughts by controlling an avatar -- a virtual character -- within a video game, making it walk and touch 2D and 3D objects.

He trained on simple virtual simulations before using the exoskeleton -- which is assisted by a ceiling-mounted harness -- to eventually walk, and reach for targets with his arms.

Over the course of the study, Thibault covered a total of 145 meters (around 476 feet) with 480 steps using the avatar, video and exoskeleton combined, researchers said in the study, which was published in the Lancet Neurology journal on Friday.

Scientists have said that the technology is an experimental treatment for now, but once improved, it could have the potential to improve patients' lives.

"I can't go home tomorrow in my exoskeleton, but I've got to a point where I can walk. I walk when I want and I stop when I want," Thibault told AFP.

"Our findings could move us a step closer to helping tetraplegic patients to drive computers using brain signals alone, perhaps starting with driving wheelchairs using brain activity instead of joysticks and progressing to developing an exoskeleton for increased mobility," Professor Stephan Chabardes, a neurosurgeon from Grenoble University Hospital and author of the study, said in a press release.

The team has recruited three more patients to the trial, and aims to allow patients to walk and balance without using a ceiling suspension system in the next phase of the research.