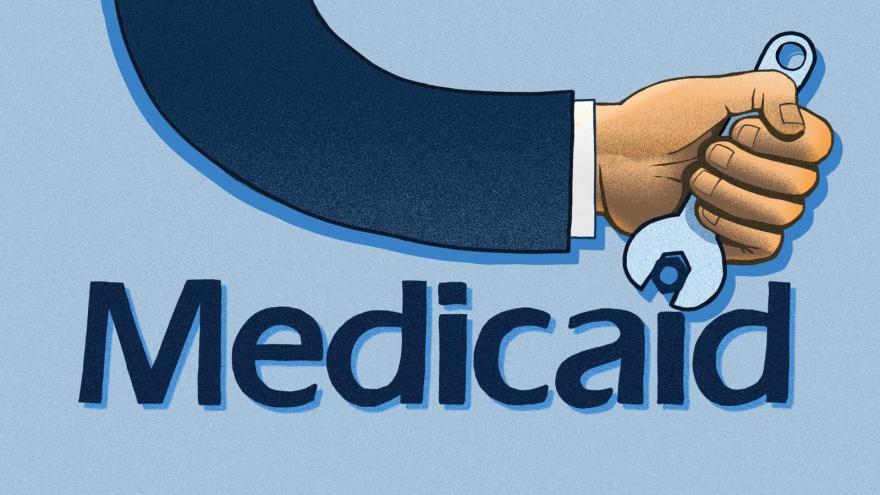 A record 80.5 million Americans have health coverage through Medicaid or the Children's Health Insurance Program, largely because states have had to keep people enrolled during the coronavirus pandemic, according to new federal data released Monday.

(CNN) -- A record 80.5 million Americans have health coverage through Medicaid or the Children's Health Insurance Program, largely because states have had to keep people enrolled during the coronavirus pandemic, according to new federal data released Monday.

Between February 2020 and this past January, enrollment in Medicaid jumped by 9.7 million people to nearly 74 million Americans -- also a record, the Centers for Medicare and Medicaid Services said. That's an increase of 15.2%.

Nearly 124,000 children joined CHIP during that period, an increase of 1.9%, pushing enrollment to nearly 6.8 million kids. More than 38.3 million children are covered by Medicaid and CHIP combined.

"This report reminds us what a critical program and rock Medicaid continues to be in giving tens of millions of children and adults access to care," said Health and Human Services Secretary Xavier Becerra.

All states saw jumps in their Medicaid enrollment, ranging from 7% in Alaska to 25% in Utah, according to the Kaiser Family Foundation.

Unlike the Trump administration, which sought to limit Medicaid participation by adding additional requirements, the Biden administration is seeking to increase coverage by making it easier to enroll. CMS has already started unwinding some of the efforts of the previous administration, including allowing states to institute work requirements.

Also, President Joe Biden opened a special enrollment period for the federal Affordable Care Act exchanges, which runs from mid-February to mid-August. More than 331,000 people seeking coverage were found to be eligible for Medicaid or CHIP, though May.

Earlier this month, the Biden administration announced that 14.8 million low-income adults had gained Medicaid coverage through the Affordable Care Act's expansion measure. Some 12 states have yet to approve Medicaid expansion, and Missouri's Republican Gov. Mike Parson last month said his state will not put in place the expansion provision that voters passed last year on July 1 because lawmakers did not appropriate funding. A lawsuit is aiming to force him to do so.

Now that the Supreme Court has turned aside the latest legal challenge to the Affordable Care Act, the Biden administration and congressional Democrats are seeking ways to broaden access to Medicaid. The Democrats' $1.9 trillion rescue package earlier this year provided more funding to the holdout states if they expand, but none have taken lawmakers up on it.

RELATED: Here's what the Supreme Court's Affordable Care Act ruling means for you

CMS Administrator Chiquita Brooks-LaSure told reporters last week that the agency will continue to encourage states to take advantage of the incentive and to work with the agency on waivers if they want to tailor their programs. The agency is in conversation with some states, she said.

"We're going to continue to point out to states that we want to offer them flexibility as they come on board," Becerra said. "We're hoping that the other states that haven't gotten there will recognize that they've got millions of residents who could qualify for good, quality care and would no longer need to use the emergency room as their point of primary care services, which makes it the most expensive way to get care."

An additional 4 million people could potentially gain access to Medicaid if all states expand.

While some of those flocking to Medicaid became eligible after losing their jobs amid the pandemic's economic upheaval, much of the increase stems from a provision in an early coronavirus rescue deal Congress passed in March 2020, CMS said.

Lawmakers approved a temporary 6.2 percentage point increase in the federal matching rate for states. In turn, they are required to maintain continuous coverage for current Medicaid enrollees and are barred from making eligibility or enrollment more restrictive than prior to the pandemic. The provision will remain in place as long as the federal public health emergency is in effect.

Typically, there is significant churn in the Medicaid program as participants' income increases or they encounter administrative hurdles to reenrollment.

For the two years before the pandemic, Medicaid enrollment had slid by about 2.2 million people, or 3%, amid the robust economy and some states' tightening of eligibility verification and renewal requirements.

During the pandemic, federal aid and stronger-than-expected revenues have helped states avoid cutting payments to Medicaid providers, said Rachel Garfield, co-director of Kaiser's Program on Medicaid and the Uninsured. Instead, states focused on maintaining access to doctors and hospitals, which were struggling as patients stopped going to doctors and hospitals for more routine care during the outbreak.

"States were trying to retain providers and make sure they were staying solvent, particularly as utilization dropped," she said.