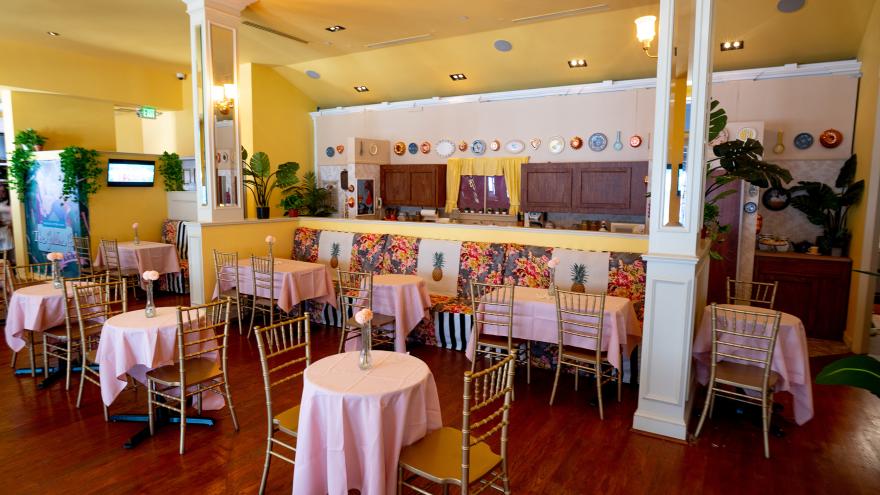 (CNN) -- Those who love "The Golden Girls" and live in the Los Angeles area will soon have what can only be called a golden opportunity.

From the people behind the "Saved by the Bell"- and "90210"-themed pop-up restaurants, The Golden Girls Kitchen is set to open this weekend in Beverly Hills.

The fast casual sit-down restaurant is being billed as a "fully immersive" experience that will allow fans to experience the world of this beloved series, with photo ops throughout, including the iconic kitchen table, a fully decorated lanai and lots of palm print.

It officially opens on July 30, which is also National Golden Girls Day. After its run in Beverly Hills, the restaurant will go on tour, hitting New York, Miami, San Francisco and Chicago in the coming months, through Spring 2023.

The fully restaurant experience is a joint collaboration between Bucket Listers and Derek Berry, who was behind the Saved by the Max, Good Burger, and The Peach Pit pop-ups.

"Bringing Golden Girls to life has always been a dream of mine, the demand has far surpassed our wildest dreams," Berry said in a statement. "Our team is confident that both die hard fans of the show and first timers alike will leave with a deeper appreciation for the show's lasting legacy."

"The Golden Girls" ran on NBC for seven seasons from 1985 to 1992. But it has enjoyed a resurgence in recent years thanks to streaming and its continued syndication.

Reservations are available through the official website. Tickets include choice of entree (with options like Sophia's Lasagna Al Forno or a "Miami style" Cuban sandwich) and dessert.

And before you ask, yes, of course there's cheesecake.