Painting stolen from Ukrainian museum during WWII recovered in Connecticut 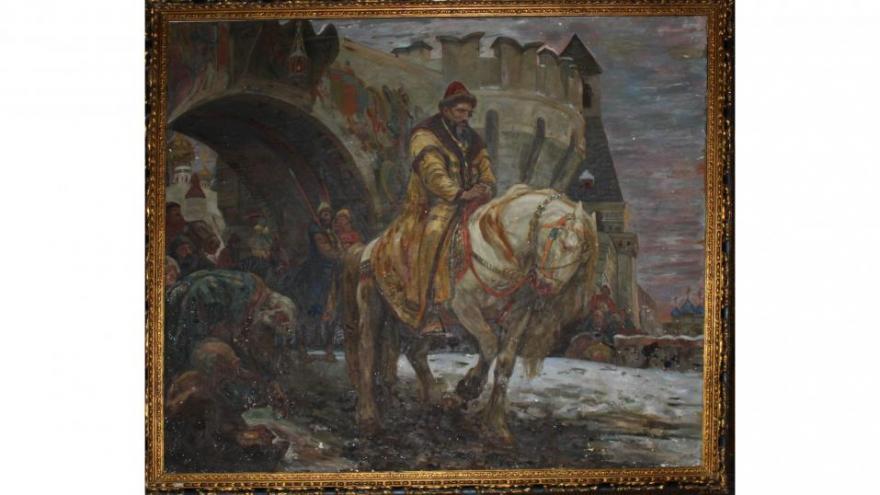 A painting, stolen from a Ukranian museum during WWII, was recovered in Connecticut.

(CNN) -- For 30 years, a large painting of a hunched Russian czar leaving the Kremlin on horseback hung in David Tracy's home.

Standing over seven feet tall and over eight feet wide, the canvas came into his possession when it was included with a house he bought in Ridgefield, Connecticut, in 1987. But when it came time for him and his wife, Gabby, to retire to Maine, they decided to sell the beloved artwork. Little did they know the attempted sale would lead to a meeting with the FBI, a cease-and-desist letter, and an exchange of cultural justice with Ukraine.

The oil painting they planned to auction off turned out to be an original 1911 painting by Mikhail Panin, titled "Secret Departure of Ivan the Terrible Before the Oprichina," that disappeared from the Dnepropetrovsk Art Museum in Ukraine during World War II, according to a press release from the US Attorney's Office in Washington. It depicts the former Russian ruler and his loyal followers secretly leaving the Kremlin for another Russian city.

The Tracys were notified after the Dnepropetrovsk Art Museum contacted the Washington-based auction house they hired to facilitate the sale. They were asked to immediately stop the auction because the painting was stolen property.

"It was a big shock. At first I thought it wasn't necessarily true," Gabby Tracy, 84, told CNN Monday.

After the FBI confirmed to the Tracys that the painting was authentic, they decided to return it to its rightful owners.

"It was never a question in our mind that we have to do the right patriotic thing," said Gabby, a Holocaust survivor from Slovakia. "The fact that it was stolen from a legitimate institution, we're happy to do the right thing."

A demonstration of friendship

When David Tracy bought the Ridgefield house in 1987, Gabby, then a friend of his, was the realtor who facilitated the sale.

Two paintings came with it, one of which was the Panin piece. Years later, when they got married and moved to another house, they couldn't leave it behind. Gabby said they spent $37,000 to build a display area in their new home, designated for the Russian czar they had come to cherish dearly.

"At many points we could have sold it, but we didn't," Gabby said. "He seems sad, but we learned to love him."

Gabby said several family reunions and functions were held in front of the painting, and whenever people came into the house, they would be charmed by it, and the Tracys would have a story to tell.

Authorities have determined that a former member of the Swiss Army had previously owned the house.

Federal agents say that the Swiss man, who has not been publicly identified, emigrated to the United States in 1947, and then sold the house with the painting to a couple in 1962. That couple eventually moved to Arizona, leaving the painting to David in the Ridgefield house. According to the US Attorney's Office, the Swiss man died in 1986 with no descendants.

"The recovery of this art looted during World War II reflects the commitment of this office to pursue justice for victims of crime here and abroad," said US Attorney for the District of Columbia Jessie K. Liu. "The looting of cultural heritage during World War II was tragic, and we are happy to be able to assist in the efforts to return such items to their rightful owners."

The Ukrainian Ambassador to the United States, Valeriy Chaly, expressed gratitude to the Tracys in a Facebook post, characterizing their willingness to return the painting as a vivid demonstration of the friendship between the US and the Ukrainian people.

In a written statement, the Ukrainian Embassy said that the repatriation of the painting "sets the first example of achievement of the US-Ukraine cooperation on the official level in returning illegally exported cultural objects."

Having agreed to waive any claims to the painting, David and Gabby hope to visit it again one day.

"It would be lovely to go to Ukraine to see it back to the museum where it belongs," Gabby said, adding that she hopes the Ukrainian people appreciate its recovery.