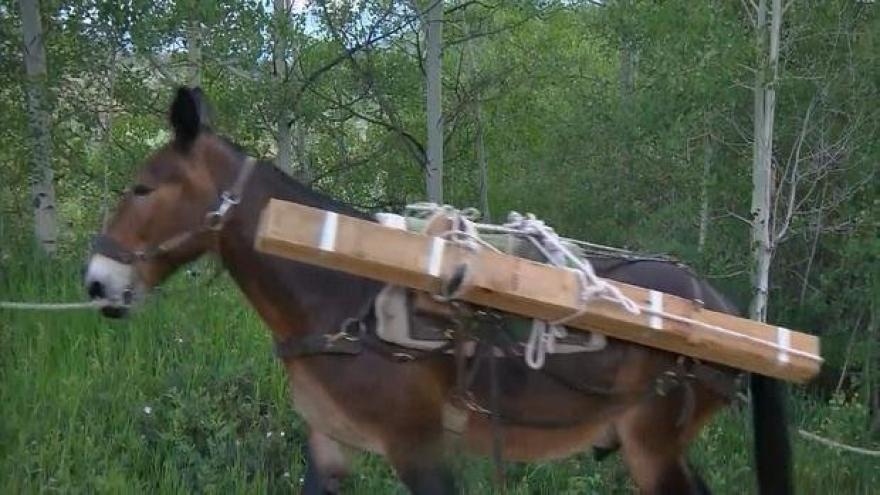 SILVERTHORNE, Colorado (KCNC) -- There were three options: Use human labor to hike in lumber to repair a bridge along the Gore Range Trail, use mules to hike it in, or don't repair the bridge at all.

Thankfully (for the trail teams) they went with a mule team out of Cody, Wyoming.

Crosby Davidson with the U.S. Forest Service is one of the riders who watches after the 90 head of horses and mules as a part of the Shoshone specialty pack string, located in Shoshone National Forest. The horses are for the rangers to ride, the mules are to carry the loads. His team can be called in anywhere in District 2, which includes Colorado, most of Wyoming, anything east of the Continental Divide in Wyoming and Nebraska, South Dakota as well as other spots.

Some districts have their own teams ... but when they don't, he and his mules get a call.

"We usually run with about 12 head. Two riders, two saddle horses and 10 mules which each packer is stringing a pack of five mules," Davidson explained. "Sometimes we will string them all together and have 10 strung together so that one packer can adjust loads."

On Tuesday the team of 10 mules were in charge of bringing loads of lumber up the trail to help rebuild a bridge, torn down by snow weight and time. The rule of thumb is that a mule can carry 150 pounds of load, unless they're an extra big specimen.

Davidson said they have a few of those draft mules (a result of a male donkey mating with a female draft horse) on the team.

"It's kind of a catch-22 because they are taller and harder to pack stuff on top of them, but they can just tolerate the weights a little better," Davidson said.

Mountain newsroom reporter Spencer Wilson compared the horses rangers rode on to army jeeps; speedy and maneuverable, but not there to lug stuff around. He compared mules to tanks.

"I think that is about right -- they really are, but they are actually really nimble tanks," Davidson corrected. "They can get a lot of places."

Josh Watson is the project manager from the local Dillon Ranger District, and he's the one who called for the backup. Otherwise, he said the work the mules will get done in a day would have taken his team of human work crews at least a week to move.

"Mules tend to have a little better morale when they have to carry that kind of weight than when people do," joked Watson.

They expect to have the bridge done in two weeks thanks to the help from the mules, so long as they continue to cooperate. These rent-a-mule team folks have done projects for Colorado in the past, including working on 14er trails like Mt. Wilson, Shavano, Kit Carson and Elbert.