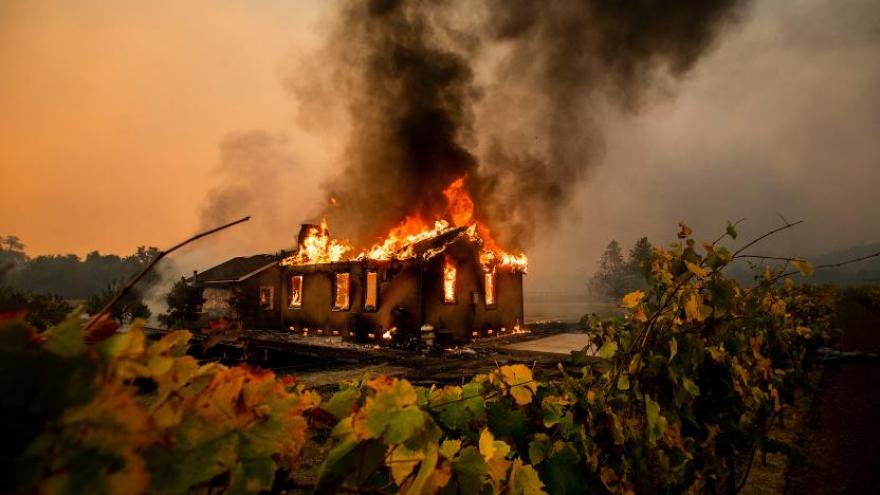 (CNN) -- Pacific Gas & Electric (PG&E) must pay $125 million for its role in the 2019 Kincade Fire in Sonoma County, according to a settlement with the California Public Utilities Commission (CPUC).

PG&E shareholders will pay $40 million to the state's general fund and $85 million will go toward removal of abandoned transmission facilities in its service territory, CPUC said in a statement. The utility will not be allowed to pass on those costs to customers.

"We will continue our work to make it safe and make it right, both by resolving claims stemming from past fires and through our work to make our system safer tomorrow than it is today," PG&E said in a statement.

The statement went on to say the company accepts Cal Fire's finding that a PG&E transmission line caused the Kincade fire, but "disagree with SED's (CPUC's Safety and Enforcement Division) alleged violations."

"We believe the settlement will assist in allowing all parties to move forward from the fire, and permit us to focus on compensating victims and making our energy system safer," the statement added.

Earlier this year, criminal charges were filed against PG&E over the Kincade Fire. The charges consisted of five felonies and 28 misdemeanors including unlawfully starting a fire which caused bodily injury, unlawfully burning inhabited structures, unlawfully causing a fire which burned forests, and various air pollution crimes, according to the Sonoma County District Attorney's Office.

The utility has faced scrutiny in recent years over its equipment's role in a spate of deadly and destructive California fires. In 2020 summer, PG&E pleaded guilty to 85 counts, including involuntary manslaughter and unlawfully starting the Camp Fire, the deadliest blaze in the state's history.

The Kincade Fire had resulted in the largest evacuation in Sonoma County history, which included the towns of Healdsburg, Windsor and Geyserville. It torched more than 5,000 acres within the first three hours.