About 390,000 Texans are still under boil water advisories from the winter storm 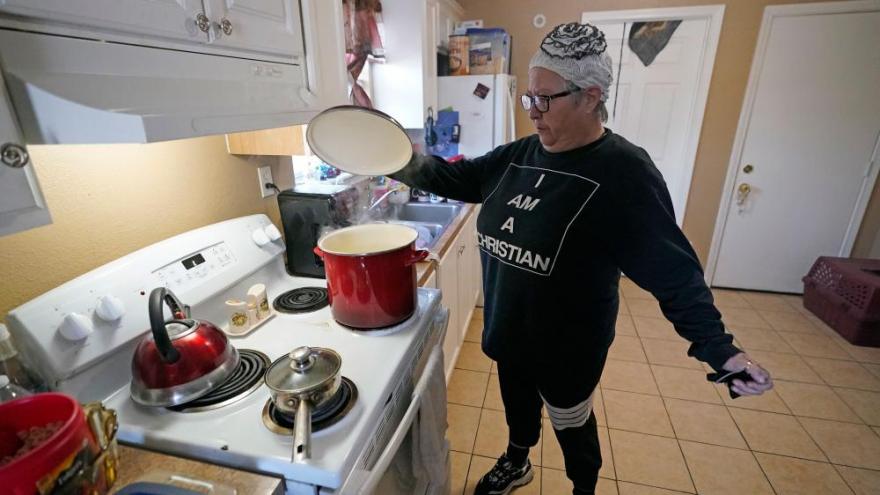 Nancy Wilson boils water in her home in Houston.

(CNN) -- About 390,000 Texas residents were still under boil water advisories as of midday Monday, almost two weeks after a winter storm slammed large swaths of the South.

The Texas Commission of Environmental Quality (TCEQ) website shows there are 399 active boil water notices in effect on Monday, while 1,780 notices have already been lifted.

While many people have gone without water for more than a week, those who have had their service resumed are trying to give back.

Pastor Marilyn Davis spent her Sunday picking up cases of water at the Mesquite Police Department to deliver to members of the community in need, CNN affiliate KTVT reported.

"It's been very, very hard," Davis told the affiliate. "I live in an apartment complex and when we didn't have any water it was very difficult for us to make it. So many people in one place."

Now that she has her water back, she wants to make sure other people have what they need.

"Since we got water we want to take water also," Davis said, according to KTVT.

The winter weather that hit Texas paralyzed cities, snarled up roads and wreaked havoc on infrastructure and utility systems from Oregon to Mississippi. At least 80 people died across 11 states due to weather related issues, according to a count by CNN. At least 47 of the weather-related deaths have been reported in Texas.

"Even though the power is on and the water pressure is normalized, there are thousands of homes and apartments that have been affected because of busted pipes," Houston Mayor Sylvester Turner said in a press release Sunday. "They still do not have water, so there is a tremendous need."

More than 3,000 vehicle, about 10,000 people, showed up to a distribution event held by the city and received cases of water, meal kits to last four days, and other relief items, the release said.

Although the water distribution event provides meals and bottled water, daily life for many is still impacted by a lack of usable water for cleaning and bathing.

Coaquies Davis, who lives at the Sterlingshire apartments in Houston, told CNN affiliate KPRC that she's had to keep her children from playing because she can't keep them clean without water.

"I feel so frustrated," Davis said, according to the affiliate. "It hard on us and our kids. I've been keeping them inside because you can't get too dirty if you can't bathe."

Without water, many people in Dallas have gone weeks without being able to do their laundry, KTVT reported.

Nonprofit Matthew 25 Ministries, in partnership with Tide Cleaners, has begun offering free laundry services at the Bachman Rec Center in Dallas, where residents can drop off their laundry for volunteers to wash, dry and fold, according to the affiliate.

"By being here hopefully we can take a little bit of stress off of them and provide a little sense of normalcy, let them know that people care," volunteer Laura Karnes told the affiliate.

The storm caused issues with both power and water in areas that don't typically undergo such severe temperature drops, such as Texas and Mississippi.

In Texas, where more than 4 million customers were left without power during the storm, the fallout for the Electric Reliability Council of Texas (ERCOT), the state's utility council, has been swift and far reaching.

At least seven members of the board have resigned and Gov. Greg Abbott vowed to launch an investigation and hold the agency accountable.

As ERCOT has come under fire in recent weeks, the agency has also issued its own sanctions, banning electric provider Griddy.

Griddy, which connects customers directly to the wholesale electricity market for a monthly fee, has faced scrutiny and even lawsuits after customers faced very large bills in the wake of the statewide winter storm and power outages.

Griddy previously said that it is seeking relief from Texas utility regulators and is "committed to crediting customers for any relief, dollar-for-dollar." The company has attempted to cast blame on Texas' utility regulator, Public Utility Commission of Texas (PUCT) for setting the electricity price at $9 per kilowatt hour.

"On February 16th we asked ERCOT for emergency help when our members needed it the most and they did not take action. This is after the PUCT mandated the maximum price for days," Griddy said in a statement after the revocation."Today, ERCOT took our members and have effectively shut down Griddy."

Griddy customers now have a window of time to choose a new electricity provider on their own, or they will be moved to a provider designated by the PUCT, according to ERCOT spokesperson Leslie Sopko.

"We wanted to continue the fight for our members to get relief and that hasn't changed," Griddy's statement said.

DeAnn Walker, chairwoman of the PUCT, has resigned her position effective immediately, according to spokesperson Andrew Barlow.

Lt. Gov. Dan Patrick had called for Walker's resignation as well as that of ERCOT President and CEO Bill Magness.

Patrick said they were good people who worked very hard but "their failure to plan for the worst-case scenario and their failure to communicate in a timely manner dictates they are not the ones to oversee the reforms needed."