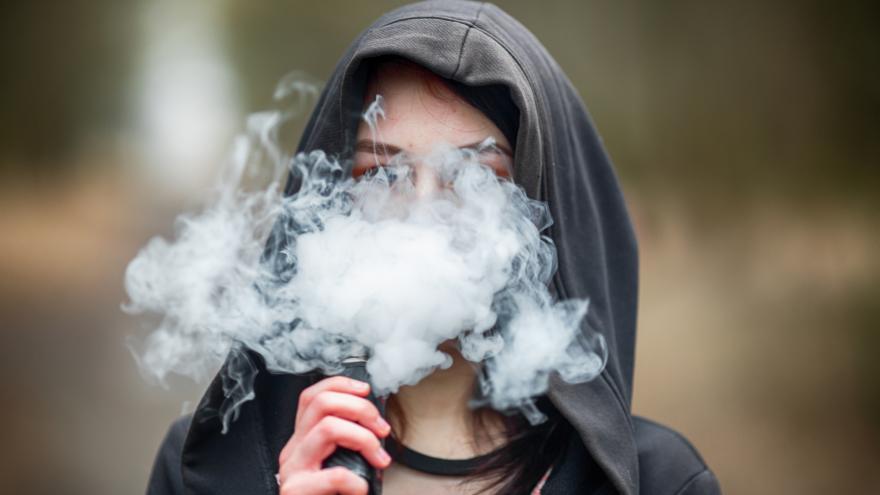 (CNN) -- About 1 in 8 US high school students -- more than 2 million total -- said they had used tobacco products in the previous 30 days, the vast majority being e-cigarettes, according to results from the 2021 National Youth Tobacco Survey.

On one hand, these numbers appear to continue a decline seen from 2019 to 2020, especially when it comes to vaping. However, the authors of the latest report caution against comparing 2021 to prior years because the data was collected differently during the pandemic to include students learning remotely. Experts say it's unclear how much teen tobacco use may have been affected by access and remote learning during that time.

Public health advocates say that curbing youth use is a high priority when it comes to tackling the leading cause of preventable disease and death in the United States, given that the majority of smokers started before age 18.

Some of the survey's findings on e-cigarettes were released last year, detailing the popularity of flavored products and disposable vapes. The latest analysis, a collaboration between the US Centers for Disease Control and Prevention and the US Food and Drug Administration, includes a wider range of data on other tobacco products, demographics and other factors associated with their use.

Among the findings: About 11% of high schoolers reported vaping in the past 30 days. For cigarettes, this was just under 2% -- a number Matthew L. Myers, president of the Campaign for Tobacco-Free Kids, described in a statement Thursday as "historically low."

"While these results may be impacted by the pandemic and changes in how the survey was conducted, the low youth smoking rates also continue a remarkable long-term trend," said Myers, who was not involved in the report.

Still, he warned that a return to school could bring the "real risk of a resurgence in youth tobacco use" and urged policymakers to ensure that flavored products, known to be popular among young people, be removed from the market.

Students identifying as LGBT more frequently reported current use of tobacco products: about 14% of lesbian, gay and bisexual students and about 19% of transgender students. These numbers are roughly double what was seen among students who didn't identify as such, about 8% in both cases.

These numbers were also higher among students experiencing severe psychological distress: 14.2% versus 5.5% among those reporting no distress. The authors of the latest report say it works both ways: "Studies found that youths with mental health disorders were at increased risk for cigarette smoking, but also that youth nicotine exposure was associated with the development of mental health disorders."

Importantly, about two-thirds of current users said they were "seriously thinking about quitting," according to the report. Even so, the authors say that multiple factors remained widespread in 2021 that could have the opposite effect on these trends, including flavored products, exposure to social media and traditional marketing, and misperceptions of how much harm these products can cause.

"It's revealing that about two-thirds of current youth users expressed a desire to quit tobacco products and that three-quarters of youth reported having seen or heard a tobacco prevention ad," Mitch Zeller, director of the FDA's Center for Tobacco Products, said in a statement Thursday. "But the 2021 use data are still concerning and will be valuable for policymakers and educators committed to protecting the next generation from tobacco-related disease and death."