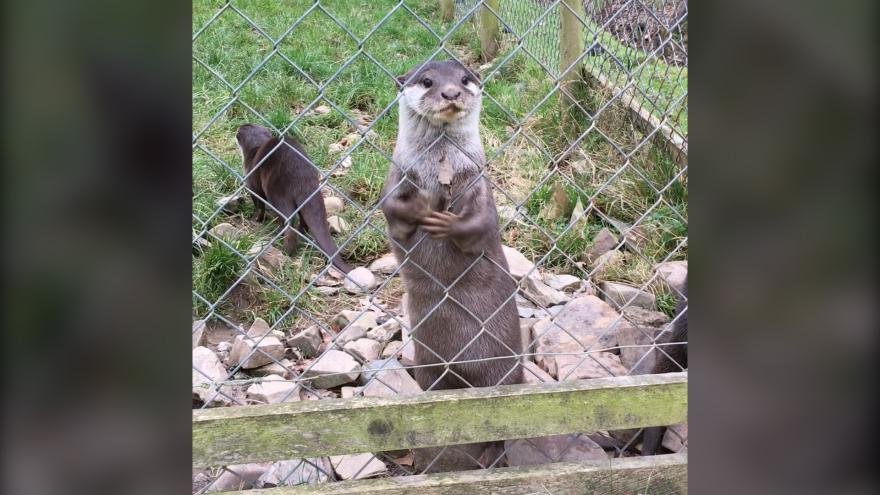 (CNN) -- If you've ever seen otters romping at the zoo, sometimes it looks like they're juggling little rocks.

It turns out that this playful-looking behavior may actually be something captive otters do in anticipation of their next meal.

Researchers believed that rock juggling -- where otters bat or throw stones in the air, catch them and even roll them around on their chests and necks -- was their way of practicing or improving the way they retrieve food from mussels, clams and other things they would typically forage in the wild.

But they wanted to knowwhy otters might feel the need to do it, what function it served, if it was beneficial and what factors might influence their behavior.

They studied 50 otters across three zoos in the United Kingdom, with ages ranging from 3 months to 19 years old. Only six of the otters studied were smooth-coated otters because they are more rare than small-clawed otters in captivity.

The two different types of otters are related, but they differ in key areas, inclulding their diets. Asian small-clawed otters eat shellfish and crabs, while smooth-coated otters pursue fish.

The otters showed a variety of rock jugglingbehaviors, sometimes engaging in the activity on land. At other times they would take pebbles to the edge of the pool.

The researchers created three different food puzzles in order to test if the juggling otters were better and more dexterous at retrieving food. Some captive otters have never encountered mussels or clams and wouldn't know what to do with them. But they are used to receiving puzzle objects for enrichment, like plastic containers they can open.

"We wanted to try and replicate foraging behaviours as best as we could," said Mari-Lisa Allison, study author and researcher and recent graduate from the University of Exeter's College of Life and Environmental Sciences, in an email to CNN.

"With the Duplo bricks being stacked on top of one another with minced meat stuffed between each brick, we hoped that this would mimic having to extract foods from mussels [and] clams by prying them open," Allison said.

"With the tennis balls, this would encourage reaching in and retrieving food as they might do when foraging in small nooks and crannies. The medicine bottle was an additional puzzle to test general dexterity. Regardless, all puzzles required some form of manipulation to gain entry."

Using motion-activated camera traps in the zoo, the researchers watched the otters interact with the food puzzles, evaluating how much time they spent with the puzzles and how long it took them to solve them.

These observations were compared with the otters who juggled the most. The researchers analyzed the age and sex of the juggling otters, in addition to their hunger levels.

The researchers noticed that young otters and older otters juggled more than adults who were reproducing. But the otters who juggled the most weren't any better at solving the food puzzles than the other otters. So the behavior likely isn't improving their skills when it comes to foraging for food.

Given that only six of the otters were smooth-coated, they weren't able to compare frequency of juggling between the species.

"While it did not appear that frequent jugglers solved food puzzles faster, more research is needed to exclude the 'practice makes perfect' hypothesis to explain rock juggling in otters," said Neeltje Boogert, study coauthor and Royal Society Dorothy Hodgkin Research Fellow at the University of Exeter, in a statement.

When it drew close to feeding time, however, the otters juggled more. This suggested that they juggle when they're hungry.

The fact that young and old otters juggle more frequently could suggest that the juggle behavior evolves over time in otters, acting as developmental behavior when they're young and maintaining brain activity in the oldest otters. And like human parents, otter parents are juggling enough as it is with their pups -- they don't have time to juggle rocks.

"As these [older] otters were no longer reproductively active, they didn't have offspring they needed to care for," Allison said. "As such, we thought that they might have more time and energy to be able to rock juggle when compared to mature otters whose time and energy was devoted to caring for young."

But more research is needed to confirm thishypothesis.

Allison compared it toprimatologist Michael Huffman's research regarding stone handling in adult macaques, which could help them relax and prevent cognitive decline -- much like elderly humans keeping their brains active to stave off Alzheimer's or dementia. Huffman researches ecology and social behavior in primates at the Kyoto University Primate Research Institute.

As for otters in the wild, they're more elusive and unpredictable, which makes tracking their behavior more difficult. Based on their findings, researchers didn't believe this behavior is occurring in captivity due to stress.

In the future, Allison has many questions regarding this behavior in otters she'd like to answer, such as how rock juggling evolves over the course of an otter's lifetime, if it changes and whether it's unique to specific otters. She's also curious if the behavior differs when otters juggle rocks on land versus near or in the water.

And, at the end of the day, while rock-juggling otters are adorable to watch, their behavior continues to intrigue researchers.

"Zoo visitors are often enthralled by the otters' playfulness," Allison said. "Surprisingly, very few studies have investigated why otters are so keen to juggle stones.

"Our study provides a glimpse into this fascinating behaviour. While hunger is likely to drive rock juggling in the moment, the ultimate function of the behaviour is still a mystery."