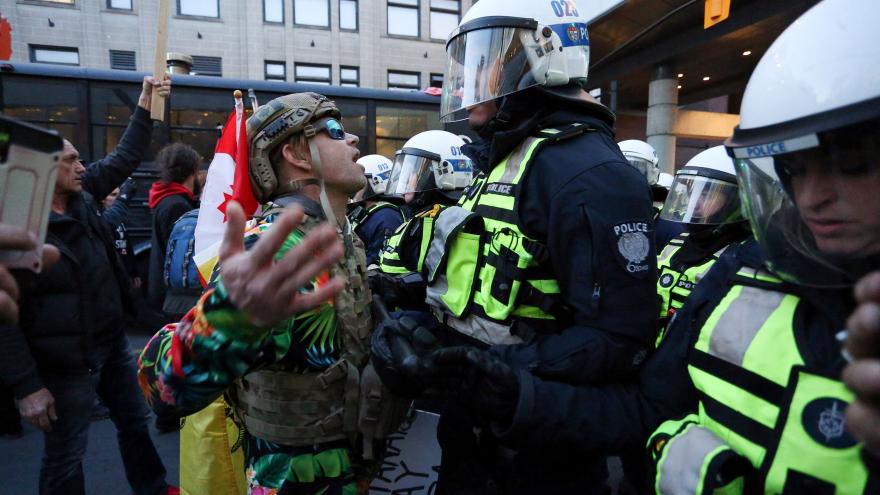 (CNN) -- Ottawa police said they arrested at least one person in the downtown area Saturday on the second day of a biker rally in the Canadian capital -- bringing the number of arrests associated with the event to at least eight since Friday.

Canadian news media, including CTV, reported hundreds of people on foot and motorcycles moved into downtown Saturday as part of the weekend rally and protest, called Rolling Thunder by its organizers.

Organizers have been vague about the rally's goals -- the event's website refers to spreading "as much peace, love and patriotism to your fellow Canadians as possible." Some organizers have said they were there in support of freedom and military veterans, according to Reuters.

The event is being organized by several people who took part in the self-described Freedom Convoy protests earlier this year, CBC reported. Those protests, which saw Ottawa's streets occupied for weeks, began with truckers protesting Covid-19 restrictions.

On Saturday, participants attended a memorial service at the National War Memorial in the morning, followed by scores of motorcycles heading downtown in a convoy, CTV reported. A rally and march was planned at Parliament Hill for mid-afternoon, according to the event's website.

The three-day event is scheduled to conclude Sunday morning.

Law enforcement officials had been bracing for protests.

Police had warned that anyone who had been charged in connection with Ottawa's Freedom Convoy protests in February and had been subsequently ordered to stay out of Ottawa would be held to that order. At least one person arrested Saturday is accused of "breaching their release conditions which included not being in the downtown area of Ottawa," police said.

No injuries were reported, and officers were in control of the city's streets, police said Friday.

Ahead of the event, the city's interim police chief said his department was prepared.

More than 500 participants were expected to travel to Ottawa this weekend, according to event organizers.

The city was paralyzed by the Freedom Convoy protests in January and February.

Theybegan with truckers who opposed the Covid-19 vaccine mandate that directed all Canadian truckers crossing the US-Canadian border to be fully vaccinated or face quarantine in their homes for two weeks when they returned.

Eventually, the protests drew others who opposed coronavirus restrictions at the time.

Hundreds of vehicles formed convoys that converged on Ottawa during the Freedom Convoy protests, and many pedestrian protesters joined the vehicles. The demonstration clogged the downtown area as well as key routes between the US and Canada.

The protests ultimately dissipated after Prime Minister Justin Trudeau invoked the Emergencies Act, resulting in the arrests of protesters and the removal of vehicles and blockades.