Other US states could see scenarios similar to the Covid-19 crisis unfolding in Michigan, expert says 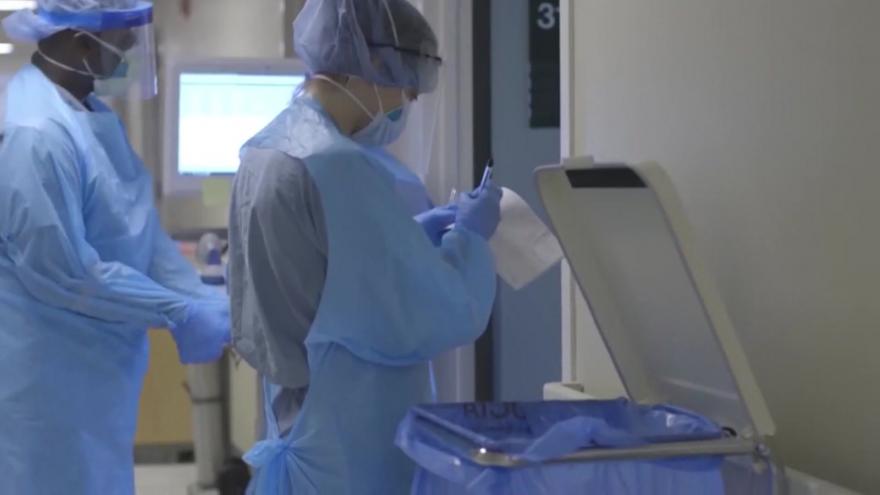 (CNN) -- States across the country are reporting a rise in Covid-19 cases. But in one state -- Michigan -- another surge has overwhelmed hospitals and healthcare workers who were already exhausted, one local health leader says.

And there are several reasons behind the crisis.

"One, we believe the overall infection rate in Michigan was lower during the pandemic to date," Beaumont Health CEO John Fox said on CNN Saturday. "Secondly, Michigan opened up recently ... with various orders being relieved."

Officials reported last week that Beaumont Health's eight hospitals in two Detroit-area counties were 90%-95% full and the number of their Covid-19 patients jumped from 129 in late February to more than 800 patients in April.

"Unfortunately, I think people have dropped their infection control issues, they're not wearing their masks as much as they should, (or) social distancing, hand hygiene," Fox added.

Dr. Anthony Fauci, director of the National Institutes of Allergy and Infectious Diseases, said on NBC's "Meet the Press" Sunday that the most effective way for places like Michigan to deal with big Covid-19 outbreaks was to shut down, rather than to redeploy vaccines from other states.

"The best way when you're in the middle of a real big outbreak and a big surge is really to shut down things much more so," Fauci said. "If you take vaccines from other places and move it around, you make that place vulnerable to what's going on in Michigan. That's the reason why you're not seeing a lot of remobilization of vaccines from one state to another."

Fox said the highly contagious B.1.1.7 coronavirus variant is further complicating the situation in Michigan, spreading rapidly not just in the state, but across the country.

Cases of that variant, which was first detected in the UK, have now been reported in all 50 US states, according to data from the Centers for Disease Control and Prevention. Florida leads the country with the highest number of cases of the B.1.1.7 strain, followed by Michigan and Minnesota, according to the CDC data.

And with a big part of the older population vaccinated against the virus, the variant has hit younger groups hard.

"It really is presenting in all of our ERs and frankly in our inpatient units," Fox said. "We're treating younger patients than we ever saw before."

Emergency physician and CNN medical analyst Dr. Leana Wen says she's worried about what this could mean for Michigan and the US.

"What's happening in Michigan now could very well happen in other states," she said on CNN Saturday. "Especially because we have this more contagious B.1.1.7 variant that is now dominant in the US."

The encouraging news, Wen added, is that Covid-19 vaccinations are speeding up, which could help blunt another potential violent surge in the country.

A quarter of all Americans fully vaccinated

In the race to vaccinate as many Americans as possible, another important milestone: more than a quarter of Americans have now been fully vaccinated.

As of Monday, all people in the US 16 years and older will be eligible to receive the vaccine.

Meanwhile, a recommended pause on the Johnson & Johnson Covid-19 vaccine continues in the US. CDC and Food and Drug Administration officials made the recommendation over six reported US cases of a "rare and severe" type of blood clot, among more than 6.8 million Americans who took the shot.

Vaccine advisers to the CDC, after meeting last week without making a decision, have scheduled another meeting for April 23 to take up the question of whether the J&J vaccine causes blood clots and, if so, what to do about it. The group previously said they needed more information.

Fauci told CNN Sunday that he expected a decision to be made about the vaccine by Friday.

"I don't want to get ahead of the CDC and the FDA and the advisory committee, but I would imagine that what we will say is that it would come back and it would come back in some sort of either warning or restriction," he told CNN's Dana Bash, on "State of the Union."

Fauci said pausing was the prudent thing to do, saying "you want to make sure that you have all the information that you need."

"I am glad that the pause is happening because it really illustrates that our system is working, that our federal health officials are prioritizing -- more than anything else -- safety," Wen said "If they're willing to hit pause on something that's less than one in a million, we should be really reassured about their commitment to safety."

The other two Covid-19 vaccines that have also gotten the green light in the US -- Pfizer and Moderna -- are not implicated in the pause. And in the coming weeks, it will be key to continue the important messaging about their safety, Wen said, and why Covid-19 vaccinations remain critical.

"We're doing this because we have a pandemic that's claimed more than 500,000 lives here in the US," Wen added.

"What I would say to the American people is that what we found is really extremely rare cases through our vaccine safety monitoring system. And that we are transparently — this meeting on Friday will be public, people can dial in -- we are transparently conveying that science," Walensky said.

Officials have also reached out to thousands of providers to inform them about what types of cases they should be looking for, she said.

"And we want to convey to the American public: We have two vaccines that are readily available -- the Pfizer and the Moderna -- and people should continue to roll up their sleeves to get vaccinated," Walensky added.

Fauci told CNN Sunday that people need to continue to wear masks, even if they have been vaccinated. He said it was possible that someone could be vaccinated but still be infected without any signs of clinical disease. They could then inadvertently transmit the virus to someone who has not been vaccinated.

Variants and breakthrough infections, although they are unusual, are another reason to continue wearing masks, he told CNN.

"We don't want people to think that you don't dramatically diminish your risk when you get vaccinated, you absolutely do, the risk is very low, and people will make decisions about what they want to do and it will be a relative risk," he said.

Fauci told ABC's "This Week" Sunday that it should be clear by fall whether people will need booster shots for Covid-19.

"I believe by the time we get to the end of the summer and the beginning of the fall, we'll have a pretty good idea whether we definitely or not need to give people boosts and when we need to give it to them," he told ABC's Martha Raddatz.

Fauci said that determination would be based on the level of what would be considered a "correlative immunity," like the level of antibody. "When the slope starts coming down, you could predict when you're going to get below the safe level or you could start seeing breakthrough infections," he said.