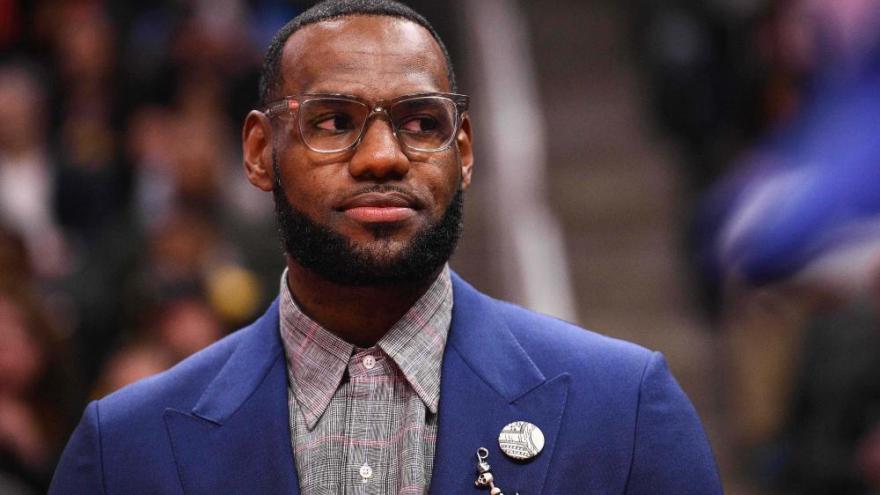 Los Angeles Lakers forward LeBron James sits on the bench during the game against the Detroit Pistons on Mar 15, 2019. The organization founded by James and other Black athletes and artists will focus on the wave of Republican legislation aimed at restricting voter access.

(CNN) -- The political organization founded by NBA superstar LeBron James and a host of other Black athletes and artists will kick off its post-2020 work with a focus on the wave of Republican-backed legislation aimed at restricting voter access in the wake of the latest presidential election.

More Than A Vote will use the 2021 NBA All-Star Game in Atlanta to draw attention to recent efforts by Republican lawmakers in Georgia to make it harder for people to vote by pushing for restrictive election laws. The group is kicking off a campaign named Protect Our Power, which, in addition to fighting these laws in states across the country, will look to mobilize Black voters in off-year and municipal elections.

The new program will be punctuated by a new ad campaign voiced by James himself, in which the NBA icon argues that the success his group and others had at registering and turning out voters during the 2020 election led directly to Republicans looking to make it more difficult to vote.

"Look what we did. Look what we made happen. What our voices made possible," James says as images and video of activism ahead of the 2020 elections plays. "And now, look what they're trying to do to silence us. Using every trick in the book. And attacking democracy itself. Because they saw what we're capable of and they fear it."

He adds: "So this isn't the time to put your feet up or to think posting hashtags and black squares is enough. Because for us, this was never about one election. It's always been More Than A Vote. It's a fight that's just getting started. And we've been ready. You with us?"

The group said that a 30-second cut of the ad will premier during coverage of the All-Star Game on Sunday. The ad will be part of a broader focus on voting rights during the All-Star Game -- the group announced earlier in the week that they have partnered with the NBA and the players union to highlight attacks on voting around the game.

"We are in a position to let the world know and, in particular, let people who are new to the process or not as engaged with politics know, that these fights around voter suppression don't just take place during an election year," said Addisu Demissie, the executive director of More Than A Vote.

Michael Tyler, a spokesman for the group, added that they want to make clear that while "there has been a change of leadership at the federal level, in order to secure lasting justice, people have to maintain a sense of engagement at the local and state level year in and year out."

A secondary goal for the group is to signal to people that the kind of activism they saw from athletes during former President Donald Trump's administration would not be ending with his loss.

"We called ourselves more than a vote for a reason," said Demissie. "This is us planting the flag that athletes being activists is not just going to stop because the 2020 election cycle is over."

Republican lawmakers, spurred on by Trump's repeated false claims about fraud in the 2020 election, have begun to push restrictive voting changes across the country, with the Republican State Leadership Committee leading the charge to roll back provisions that expanded the vote in key states. The group claims their aim is to "restore the American people's confidence in the integrity of their free and fair elections" by "making it easier to vote and harder to cheat," parroting Trump's baseless claims.

The Brennan Center for Justice found last month that more than 250 bills aimed at limiting voter access have been filed since the election.

More Than A Vote will begin with a focus on Georgia, a state that became a leading battleground after Joe Biden became the first Democratic presidential nominee since 1992 to win there in November and both US Senate elections were won by Democrats in January. The group will partner with Black Voters Matter Fund, Fair Fight Action, Georgia NAACP and the New Georgia Project.

The plan, said group organizers, is to expand work done in Georgia to other states where stricter voting laws may be passed, including Pennsylvania, Florida and Arizona.

"Black and brown voters changed the game in 2020, so in response, lawmakers are trying to change the rules in 2021," said Renee Montgomery, a WNBA player who opted to forgo the 2020 season to focus on social justice. Montgomery became a More Than A Vote member and is now a co-owner of the Atlanta Dream, her former team.

"We know that as athletes and as leaders we have to keep our foot on the gas to protect our power, preserve and expand our voting rights, and to continue turning moments into momentum," she said. "More Than a Vote is just getting started."

More Than A Vote was founded in the run-up to the 2020 election, providing James and others with a vehicle to help register Black voters and turn them out in the November election. The group currently boasts dozens of professional athletes and artists as members, including NFL quarterback Patrick Mahomes, American tennis star Sloane Stephens and comedian Kevin Hart.

James has long been one of the nation's most politically active and outspoken athletes and he used his platform to routinely criticize Trump. The basketball star recently got into a spat with Swedish soccer star Zlatan Ibrahimovic, who said athletes like James should stay out of politics.

James responded by saying he would "never shut up about things that are wrong" and that there is "no way I would ever just stick to sports, because I understand how powerful this platform and my voice is."