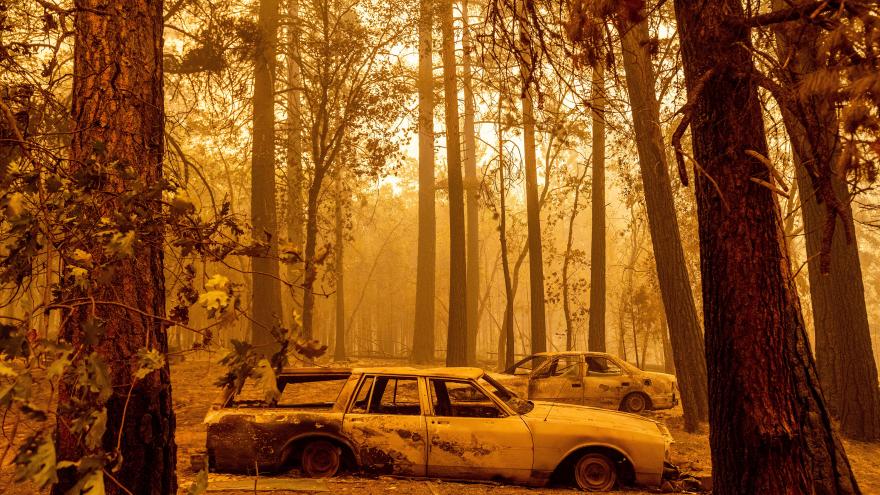 The blaze has grown to 410,731 acres and remains at 53% contained, according to an Inciweb update.

The Bootleg Fire has destroyed 161 residences and 247 outbuildings.

Cooling temperatures and the likelihood of isolated showers through Wednesday are expected to help the fight. But aggressive fire behavior is expected to return later in the week as temperatures rebound and rise, according to Inciweb.

"We will continue operations with a focus on the safety of the community and our firefighters," said incident Commander Norm McDonald. "We're continuing with community and agency partners to suppress the fire as effectively as possible to protect timber, ranchlands and other local values."

A busy fire season in the US has charred more than 2.82 million acres this year, mostly in Western states, with active wildfires accounting for 1.5 million acres burned.

There are 79 active large wildfires burning across 12 states, according to the National Interagency Fire Center (NIFC).

Over the weekend, two fires -- the Dixie and Fly fires in northern California -- merged in the Lassen and Plumas national forests. The combination created the 15th largest fire in state history and prompted evacuation orders for more than 7,800 residents across two counties, California Governor's Office of Emergency Services spokesperson Bryan May told CNN early Tuesday.

The merged fire has burned 208,206 acres and is 23% contained, according to Inciweb. Officials have not yet determined the cause of the fire, which sparked July 13.

Fires across the country have led to air quality issues, evacuations and property damage as a drought continues to hold much of the west in its grip. Air quality warnings were issued in 12 Montana counties on Monday due to smoke issues. There are currently 19 large wildfires burning in the state, according to NIFC.

The heat is only exacerbating issues for those battling the fires as well as those staying behind to protect their property from the flames.

There are nearly 40 million people under heat alerts throughout the central US Tuesday, where it will either be, or feel like over 100 degrees.

Mandatory evacuations were ordered in Plumas County on Sunday as the Dixie fire continued to grow.

"You should leave the area immediately. If you remain emergency personnel may not be able to help you," an emergency alert from the Plumas County Sheriff's Office warned.

But one man said he stayed behind to watch his animals and protect his land.

Jon Cappleman told CNN affiliate KCRA that remaining on his property has been challenging.

"It's very stressful, scary at times. Last night ... you could see the glow over that hill right there," he said. "The firefighters put it out, or knocked it down, to where all of a sudden the glow was gone, and I was just relieved."

Cappleman told the affiliate that conditions have worsened, as thick, acrid smoke fills the skies and road closures prevent him from getting food for his animals.

"The smoke is acid, it burns your lungs. It's just the oxygen level has dropped, it's probably only about 85%," he explained.

The fire has engulfed much of Indian Falls, which sits along CA-89 in California's Plumas National Forest, northwest of Reno, Nevada.

"It is safe to say that all residents in this small community have been impacted by this fire," Sheriff Todd Johns told CNN in an email Monday.

"We have been unable to conduct an actual assessment of this area, at this time, due to active fire in the area as well as hazards," Johns said. "That being said, there was substantial structure loss."

The sheriff estimated 18 of 25 full time homes in Indian Falls were lost in the fire.

Plumas National Forest Supervisor Chris Carlton said Sunday, "There are people who have lost homes. These are real impacts in our community ... These are family, friends, some of these may be folks who are out working on the line."

The span of the Dixie Fire is huge, with the outside perimeter of the fire running about 82 miles in length, according to Cal Fire Chief Mike Wink.

Road closures have also been an issue as firefighters try to gain an advantage over the flames.

In a video update posted to the Lassen National Forest Facebook page Monday night, fire behavior analyst Dennis Burns said the fire went over a road firefighters had planned to use to bring more resources to Taylorsville.

The steep terrain and extreme fire behavior has created dangerous conditions for firefighters, including hotshot crews working on the Dixie Fire.

"Steep slopes, lot of rolling materials, a lot of dead trees coming down, so I can't overemphasize the danger that these firefighters are facing in trying to keep this up," Burns said.

He said crews have to be methodical so that they don't make the fire worse with spotting, which is when a fire produces sparks or embers that are carried by the wind and start new fires.

"We want to go really slow, because if you generate a lot heat, that's going to add to the spotting problem," Burns said, adding that conditions are favorable right now for gaining the upper hand as winds remain calm.

"What we've seen is, even without a lot of wind, spotting is an issue," Burns said. "The more heat you put to it, the farther those embers go. So by using low intensity fire in the absence of wind, which we have because its so smoky here, the chances of us holding those backfire operations stand a much better chance of success."