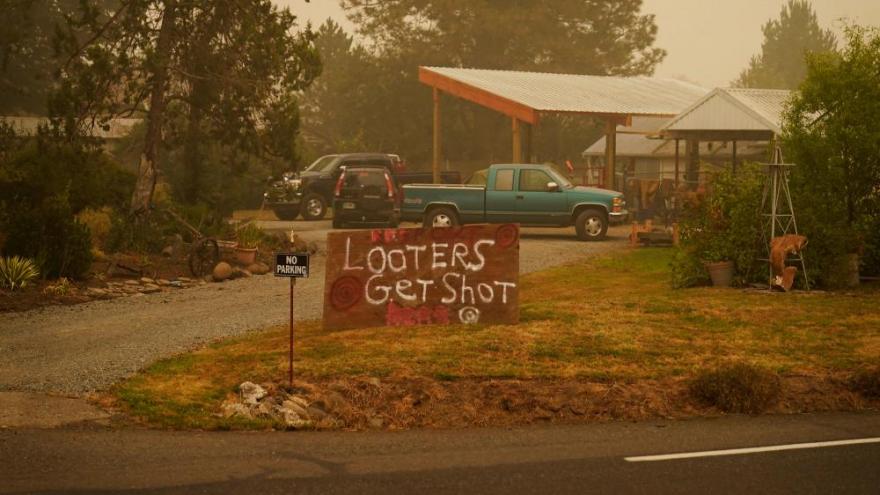 A sign warns that "Looters get shot" at a home near the Riverside Fire on September 13, 2020, near Molalla, Oregon.

(CNN) -- Suspicions of looting have driven some residents of an Oregon county to illegally stop unfamiliar drivers at gunpoint, all while much of the county is under an evacuation order as wildfires rage.

"The first thing I'd ask them to do is please stop that," Roberts said during a Sunday news conference. "It is illegal to stop somebody at gunpoint."

The sheriff's office has already reached out to "a number of them," he said. Many of the people reentering the area were going back to retrieve their personal belongings.

"The last thing I want to see is anything tragically happen because somebody is overreacting to something," he said.

Roberts said dispatchers received a 400% increase in calls out of the county for suspicious people since the fires began. Most of them were unfounded, though a small number of arrests have been made, he said.

He didn't elaborate on the number of arrests or the nature of the offenses committed.

As of Friday, there were at least five wildfires burning in Clackamas County, including the major Riverside and Beachie Creek fires. Most of the county is under an evacuation order.

But some residents living in those evacuation zones aren't leaving their homes and are instead staying to "defend" their property.

Residents have crafted homemade signs lining wire fences and hazy, yellow-tinged streets, all warning looters that they would be shot.

"Looters get shot," many of them threaten.

Unsubstantiated reports about looting and political groups causing intentional damage have divided county officials. In an emergency Board of County Commissioners meeting deciding whether to impose the curfew in Clackamas County, Capt. Jeff Smith of the sheriff's office said a sergeant "on the street" had reported that members of Antifa, a broad term for groups of far-left protesters, were armed with chainsaws and intentionally toppling telephone poles to start further fires.

He also said there were confirmed reports of looting near the outskirts of the county, though the sheriff's office has not publicly confirmed this.

Several members of the board were skeptical of Antifa's involvement. Smith said only the one sergeant had been told by informants that Antifa members were intentionally setting fires, though he presented the information as fact.

"Antifa" was recently invoked by conservative officials, including President Donald Trump, as responsible for fires, looting and mischief after months of protests against racism and police brutality. Antifa, short for anti-fascists, refers to a broad group of people with far-left beliefs who often protest at far-right events, like the 2017 Unite the Right rally in Charlottesville. Members have damaged property in past demonstrations, but accusations that they've intentionally caused more damage during crises or natural disasters, like the current wildfires, are unsubstantiated.