Rain may help fight wildfires in Oregon, but may bring other problems 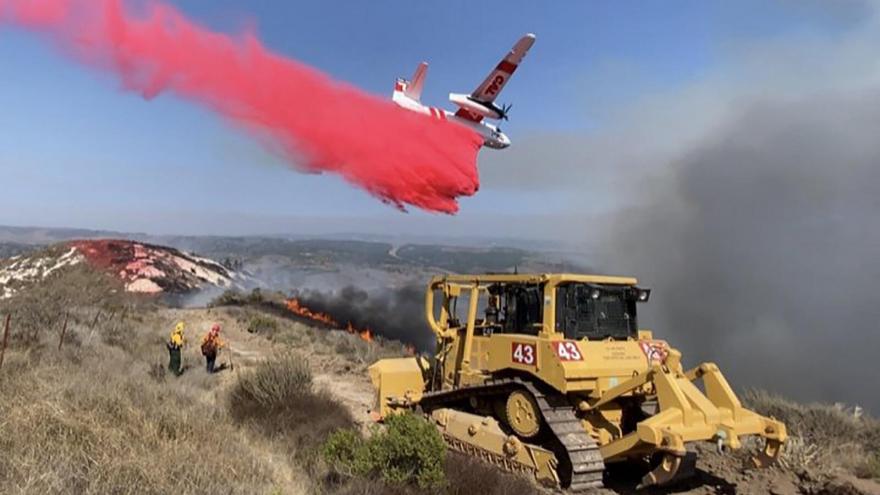 A bulldozer digs fire mine while a Cal Fire plane drops phos-check near a 110 acre fire by Vandenberg Air Force Base.

(CNN) -- A storm front is expected to hit western Oregon Thursday evening, and it's going to hit exactly the right spots to help firefighters battling blazes there, according to the state forestry department's fire chief.

A lot of the moisture will be falling on the west slopes of the Cascade Mountains, said Doug Grafe, chief of fire protection for the Oregon Department of Forestry.

"If I could script that out, that's exactly where I would ask for it," Grafe said at a press conference on Thursday.

The 12 fires burning in Oregon have destroyed more than 938,000 acres in the state, according to the National Interagency Fire Center (NIFC).

But there are flash flood watches posted for some areas where the vegetation has been stripped by the fire, and the rains could bring mudslides, according to CNN meteorologist Dave Hennen.

Multiple wildfires in Washington, Oregon and California have burned almost 6 million acres and killed at least 34 people. The NIFC said Friday there are 59 uncontained large fires burning in the West.

In Oregon, officials are battling more than fires: Law enforcement agencies, including the FBI, have been batting down conspiracy theories that Antifa extremists are setting fires and cutting down power lines, Clackamas County, Oregon, Sheriff Craig Roberts said Wednesday.

"Each and every tip that comes in, we're following that to the end," Roberts said, but investigators typically find that the tipsters' information came "from a friend of a friend" who has no evidence. In one case, Roberts said a group reported to be stashing gasoline cans in the forest to start fires was actually "Good Samaritans" helping move fuel for emergency workers.

There are legitimate concerns around the fires, Roberts said. Fifteen people have been arrested in connection with looting in evacuation zones -- none with extremist ties, he said. He also reiterated that it is illegal for individuals to set up their own armed checkpoints.

"We do not want armed citizens inappropriately stopping people," he said.

Governor says fires are a sign of climate change

The fires come on the heels of California's hottest August in state history, and Gov. Gavin Newsom said Wednesday that climate change is to blame.

"The fundamental facts cannot be denied," Newsom said. "The trendlines are not going in the right direction."

The governor's comments come just two days after President Donald Trump refused to acknowledge the effects the climate crisis is having on the state's forest fires during a visit to California, where he joined Newsom on a tour of a wildfire-ravaged area.

Newsom said Wednesday that he "directly confronted the president" on climate change -- though a video of the press briefing from earlier this week shows a gentler exchange between leaders.

"I think there's a way of approaching people and good people can disagree," Newsom said. "And I maintain we are making progress and to the extent we are being heard, I believe we are."

However, he said that he does not expect Trump to "radically change course."

"I will continue to be stubborn as I imagine he will be as well, it's not a belief system, it's data," he said. "Science. You have to acknowledge facts."

The August Complex Fire is the largest in California's history, having consumed more than 839,000 acres, and continues to burn. And with a warming trend returning over the weekend, authorities said the fire is likely not going anywhere soon. It's 30% contained.

"With no significant precipitation in sight, California remains dry and ripe for wildfires," according to Cal Fire.

More than 17,900 firefighters continue to battle at least 26 active fires, continuing a record setting wildfire year, according to Cal Fire.

"While progress was made on a number of fires, several others saw growth due to increased fire behavior and fire operations," said Cal Fire in statement. This year, more than 3.4 million acres have burned in over 7,900 wildfires, killing 25 people.

Butte County Sheriff Kory Honea said Wednesday night that one victim, Mark Delagardie, 62, of Berry Creek, ignored evacuation orders and was found in his home after a welfare check.

Another victim, Berry Creek resident Kin Lee, 64, was aware of the fire but told his family he would evacuate if flames became visible, according to Honea.

The state saw the impact of recent drought last month when an extreme heat wave sparked a rash of fires. The 136 million trees that didn't survive that lack of rainfall acted as "kindling," Newsom said.

In this round of flames, thousands of buildings have been destroyed. One of those was Brian Merzoian's dream home.

"It's devastating," he told CNN affiliate KFSN. "You just realize your place is literally reduced to ash and everything that was in it, there's really nothing recognizable. I could see the woodstove survived, but that's about it."

But in Northern California, smoke conditions and visibility are improving, according to the Bay Area office of the National Weather Service.

"There's still smoke in parts of northern and interior #California but parts of the #SanFrancisco area are FINALLY seeing blue skies - and it is not being taken for granted," the office tweeted.

US Sen. Jeff Merkley, a Democrat from Oregon, told CNN Thursday that he recently took a 600-mile journey of affected areas by car through smoke.

"It looks like a World War II ground hit by fire bombing and thousands of homes destroyed, residences destroyed," he said. "A lot of them are apartment buildings and mobile home parks, manufactured housing parks, so a lot of the families who had very modest housing, the most affordable housing, the housing is gone. We had commercial districts burnt to the ground. It's overwhelming."

Still, Oregon is also seeing bits of returning to normalcy with schools starting in the capital Salem after fire delays, according to CNN affiliate KPTV.

The wildfires have made "everything a little rockier" for the district that is going into online instruction because of the coronavirus pandemic, Salem-Keizer Public Schools Superintendent Christy Perry said.

The school district has about 41,000 students. Perry told KPTV that students' lives were mostly affected by the smoke. Some staff members were forced to evacuate, she said.

"I told my advisory kids this a few times today, like it will all be fine," teacher Macy Bowser said. "It's all going to work its way out."

But until then, fire officials are working relentlessly to contain the 26 blazes in Oregon.

In The Dalles, Oregon, crews collapsed with exhaustion onto the ground after a 14-hour day fighting the Lionshead Fire. They mustered the energy to sing together a parody of "Take Me Out to the Ball Game" using firefighting terms for the lyrics, said crew boss Theodore Hiner.

With the fires at an unprecedented scale, some residents worked to save their own homes.

Darren Richardson ignored evacuation orders as the Beachie Creek Fire closed in on his neighborhood, CNN affiliate KATU reported. He was able to save his home, but most of the town burned.

"My house is still there, my whole block is there, because we went up there and fought it," Richardson told KATU. "I've been there, I watched the town burn down, I was there for 14 hours trying to put it out with other people."