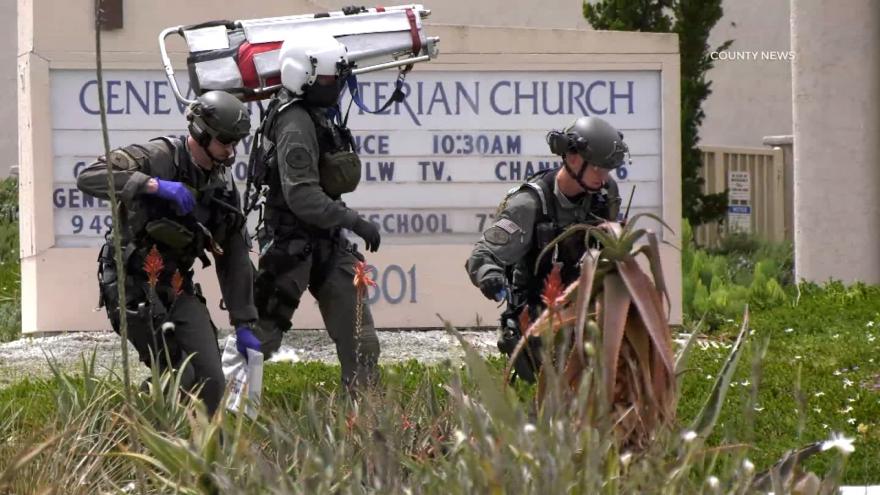 (CNN) -- The man accused of fatally shooting one man and wounding five others at a Taiwanese church service in Orange County, California, on Sunday will be charged with murder, attempted murder and possession of an explosive device, District Attorney Todd Spitzer said Tuesday.

The murder count against David Chou, 68, comes with a "lying in wait" enhancement because the suspect allegedly pretended to be a parishioner and falsely said he had been to a service beforehand in order to get inside the church.

"He did everything he could to fit in, to make himself one of them," Spitzer said. "He used that ruse to get in there and then make that entire room feel comfortable."

Chou was denied bail Tuesday, and his arraignment was postponed until June 10.

If convicted of the charges, Chou could face the death penalty, though Spitzer said he has not decided whether he will pursue the punishment. Chou will be held without bail because of the special circumstance murder charge, the district attorney's office said.

Authorities believe Chou, a US citizen living in Las Vegas, immigrated from China years ago. In an interview, the Orange County Sheriff's Department said Tuesday, Chou indicated he was born and raised in Taiwan.

"According to the suspect's writings that have been interpreted, he fostered a grievance against the Taiwanese community and he was upset about the political tensions between China and Taiwan," the sheriff's department said Tuesday.

CNN has not been able to identify an attorney for Chou and has reached out to the county public defender's office.

During a church lunch banquet, Chou attempted to lock the doors from the inside with chains and super glue and then opened fire at the elderly churchgoers, officials said. Chou also had a bag of Molotov cocktails and a bag of extra ammunition, according to authorities.

Dr. John Cheng, a family and sports medicine physician there with his recently widowed mother, charged at the man and was fatally shot in the attempt. His efforts caused the gun to jam, and a group of parishioners were then able to disarm and detain the suspect, authorities said.

Cheng, 52, was pronounced dead at the church, and authorities praised him as a hero for preventing further bloodshed.

"Dr. John Cheng is the embodiment of everything good and he laid down his life to protect dozens of others, including his own mother," Spitzer said in a statement. "That act of pure selflessness and heroism will not be forgotten."

The suspect is not believed to have any direct connection to the church or any member of the church, the sheriff said. Officials said they believe he acted alone.

The shooting happened during a lunch reception of largely elderly congregants to celebrate a pastor of the Taiwanese congregation who was returning from a mission trip in Taiwan, Orange County Sheriff Donald Barnes said. About 50 people were at the reception, he said.

Dr. Cheng's heroism prevented more bloodshed, Barnes said. "Dr. Cheng is a hero in this incident, based on statements from the witnesses and corroborated by other means," he said.

A pastor also threw a chair at the suspect, and the group was able to hogtie the suspect's legs with an extension cord and confiscate at least two handguns from him, officials said.

"That group of churchgoers displayed what we believe is exceptional heroism in interfering or intervening to stop the suspect," Undersheriff Jeff Hallock said.

The Bureau of Alcohol, Tobacco, Firearms and Explosives in Los Angeles determined that Chou was the original purchaser of the two firearms recovered at the scene, ATF agent Stephen Galloway said.

The Taiwanese Presbyterian Church shared space with Geneva Presbyterian since 2009, according to the sheriff. It always holds a lunch after its Sunday morning service, Laguna Woods Mayor Pro Tem Cynthia Conners told CNN.

Taiwan President Tsai Ing-wen posted on social media Tuesday, "I want to convey my sincere condolences on the death of Dr. John Cheng & my hopes for a prompt recovery for those injured in the shooting at the Irvine Taiwanese Presbyterian Church in California. Violence is never the answer."