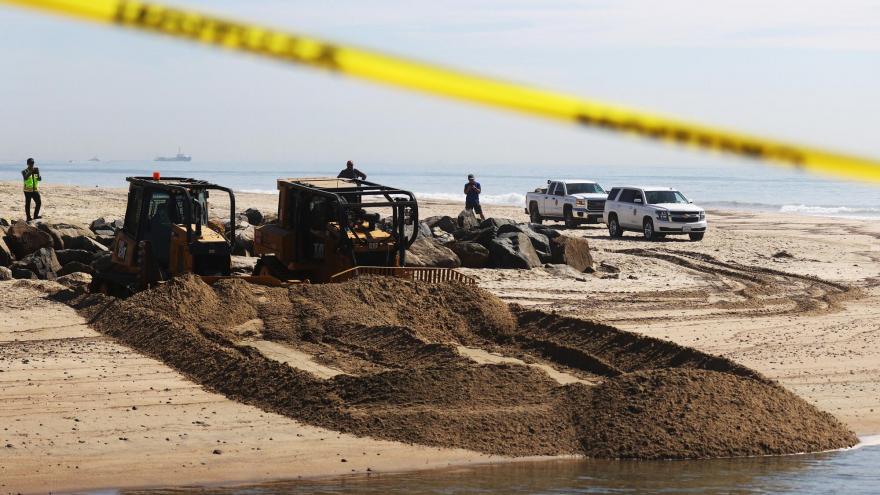 A massive oil spill off the coast of Huntington Beach, Orange County, has devastated some local wildlife and forced beach closures. A 17-mile pipeline leaked 3,000 barrels — or 126,000 gallons — of crude oil into the Pacific Ocean as of Monday, October 4, 2021.

(CNN) -- A leak at an oil pipeline off the coast of Southern California caused more than 100,000 gallons of oil to spew into the Pacific Ocean, coating local wildlife habitats, shutting down a swath of popular beaches and potentially harming human health.

The leak in the pipeline appears to have stopped and oil removal efforts are underway, officials said Sunday.

The breach, reported Saturday, occurred about 5 miles off Huntington Beach in Orange County, spilling the equivalent of an estimated 3,000 barrels -- or 126,000 gallons -- of post-production crude, local officials said.

The cause of the leak is not yet known. Martyn Willsher, the president and CEO of Amplify Energy, the Houston-based company that owns the pipeline, said Monday the company had isolated a specific spot along the pipeline that may be responsible.

"We've seen a spot that we think very likely could be the source (of the leak)," Willsher said Monday, adding that he expected the source of the oil spill would be reported within the next 24 hours.

The spill was reported to cover about 13 square miles, the Coast Guard said Sunday. Capt. Rebecca Ore said Monday the oil stretches from Huntington Beach to Laguna Beach and is likely to move farther south based on wind and currents.

"I would characterize the oil as isolated ribbons or patches of oil. It does cover several miles, and that is constantly changing," she said. "It is not one large oil slick that is covering this large area of miles."

By Sunday night, about 3,150 gallons of oil had been removed from the water and more than a mile of oil boom -- floating barriers designed to contain an oil spill -- were deployed, the US Coast Guard said at that time.

Response efforts to the oil spill have doubled since Sunday afternoon as officials continue to fly over the area and assess the leak from the water, Ore said Monday.

A total of 14 vessels are on water in addition to the Coast Guard and four teams are assessing the footprint of the spill, taking particular note of seven locally sensitive sites including Bolsa Chica Ecological Reserve and Talbert Marsh, said Lt. Christian Corbo with the California Department of Fish and Wildlife.

"This has devastated our California coastline in Orange County, and it's having a tremendous impact on our ecological preserves as well as our economics," she said. "We need answers and the public deserves answers."

A day earlier, dead birds and fish were washing up on the shore, Foley said.

"The oil has infiltrated the entirety of the (Talbert) wetlands. There's significant impacts to wildlife there," she said Sunday. "These are wetlands that we've been working with the Army Corps of Engineers, with (a local) land trust, with all the community wildlife partners to make sure to create this beautiful, natural habitat for decades. And now in just a day, it's completely destroyed."

The oil spill is just the latest such incident to hit California's shores, including the 1969 spill of as much as 4.2 million gallons of crude oil near Santa Barbara. Locally, Huntington Beach bore the brunt of a 1990 spill of about 417,000 gallons of crude oil when an oil tanker ran over its anchor and punctured its hull.

The current spill, at 126,000 gallons, would fill about 20% of an Olympic-sized pool. Its volume pales in comparison to the most serious oil spills in history, including the 1989 Exxon Valdez oil spill in Alaska (11 million gallons) and the 2010 Deepwater Horizon spill in the Gulf of Mexico (134 million gallons).

Humans and wildlife at risk

Orange County health officials advised residents to avoid recreational activities on the coastline and recommended people who may have encountered the oil seek medical attention. Effects of oil or dispersants on people could include eye and skin irritation, headache and vomiting, with children and older people more at risk, an area health agency said.

"Even when an oil sheen may not be visible, dispersed and dissolved oil contaminants may exist in the water," County Health Officer Dr. Clayton Chau said.

The city of Laguna Beach announced Sunday evening all beaches would close to the public beginning at 9 p.m., while Newport Beach issued an advisory warning people to avoid contact with ocean water and areas of beach impacted by oil.

Sections of the shoreline at Huntington Beach were closed on Saturday, with Mayor Kim Carr on Sunday describing the spill as a "potential ecological disaster."

"In a year that has been filled with incredibly challenging issues, this oil spill constitutes one of the most devastating situations that our community has dealt with in decades," Carr said. "We are doing everything in our power to protect the health and safety of our residents, our visitors and our natural habitats."

Field teams in the area of the spill have found four birds injured by oil, a number an official said Monday was not as bad as anticipated.

"In our initial assessment of the area, the number of birds in the general area seems to be lower than we had feared," said Dr. Michael Ziccardi, a veterinarian at the University of California, Davis and the director of California's Oiled Wildlife Care Network. "At this point, we're cautiously optimistic related to the number of animals that might be affected."

Cause of leak under investigation

Amplify Energy is a small, independent company with 222 employees as of the end of 2018, the last time it reported its staff size in a company filing. Its most recent financial report shows sales of $153 million, with year-to-date losses of $54.4 million through the end of June.

"Our employees live and work in these communities, and we're all deeply impacted and concerned about the impact on not just the environment, but the fish and wildlife as well," he said. "We will do everything in our power to ensure that this is recovered as quickly as possible, and we won't be done until this is concluded."

The company notified the Coast Guard on Saturday morning when employees were conducting a line inspection and noticed a sheen in the water, Willsher said.

The facilities operating the pipeline were built in the late 1970s and early 1980s and are inspected every other year, including during the pandemic, he said.

The pipeline has been "suctioned at both ends to keep additional crude out," Willsher said, adding he doesn't expect more oil to be released.

"We are still assessing to look for the source and figure out," Eric Laughlin, California Department of Fish and Wildlife spokesperson, said Sunday at a news conference. "It doesn't appear there's further fuel leaking, but we're still working on identifying that."

Authorities are examining whether a ship's anchor could have caused the oil spill, said Capt. Ore with Coast Guard.

"These ships are anchored and many are awaiting entry into the San Pedro Bay Port complex -- the ports of Los Angeles and Long Beach -- and in the course of transit it is possible that they would transit over a pipeline," Ore said Monday.

The federal Bureau of Safety and Environmental Enforcement was assisting in Coast Guard-led response to the oil spill, the agency told CNN. Its role was to assist "in identifying the location and source of any spills and provide technical assistance to the Unified Command in stopping the spillage," it said Sunday in a statement.

The National Transportation Safety Board was sending investigators to gather information and assess the source of the oil leak, it said Sunday on Twitter.

Correction: A prior version of this story incorrectly spelled Eric Laughlin's last name.