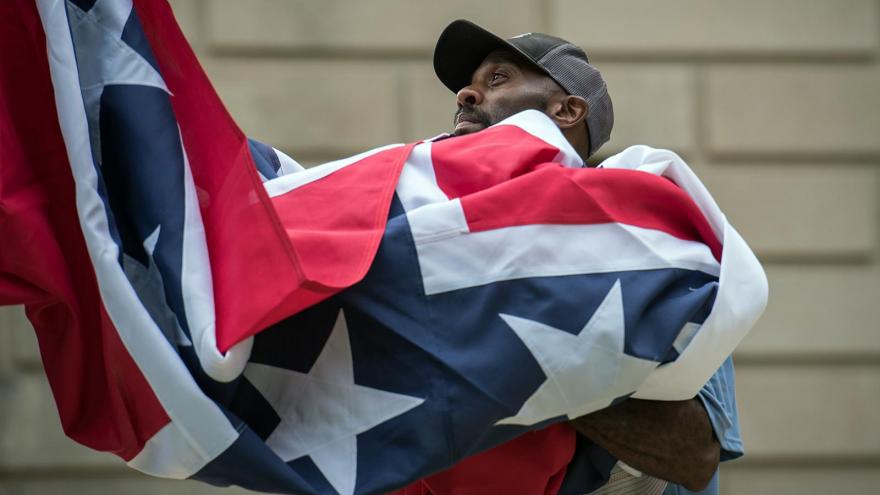 A staff member raises the state flag for the flag retirement ceremony at the Mississippi State Capitol building in Jackson, Mississippi on July 1, 2020. - Mississippi's flag, the last US state banner to feature a Confederate emblem, was permanently retired Wednesday when it was lowered from the state's capitol and removed from the grounds. The move comes one day after Governor Tate Reeves signed a bill ordering the rebel-themed flag's removal, which comes in the wake of coast-to-coast protests over the police killing of African American George Floyd in May. (Photo by Rory Doyle / AFP) (Photo by RORY DOYLE/AFP via Getty Images)

(CNN) -- Mississippi's new state flag could feature a magnolia flower, or a light house, or the state seal.

The state is currently in the process of picking a new state flag after its old one -- which was the last US state flag to feature the Confederate battle flag -- was retired in June.

The Commission to Redesign the Mississippi State Flag on Monday announced that it narrowed down the nearly 3,000 submissions it received to 146 options for a new state flag.

The commission tossed out designs that included guitars, beer cans, Largemouth bass, a Jesus meme and the Southeastern Conference logo.

Now, most of the 146 options feature magnolias -- the state flower -- or stars. The designs are some combination of red, white and blue, though a few choices feature a green background. Some of the flags show the Mississippi state seal depicting an eagle, not unlike the US coat of arms. Other designs include waves, seemingly a nod to the Mississippi River or Gulf Coast.

The new flag design needs to include the phrase "In God, We Trust."

One of the odder options that had seemingly made it to the second round was a flag design with a large mosquito surrounded by a circle of stars.

The flag was swatted down from further consideration on Tuesday and the Mississippi Department of Archives and History explained that it had been added as a mistake.

"The mosquito flag advanced to Round Two due to a typo in a list of flag numbers submitted by one commissioner. That commissioner has requested that the flag be removed from the Round Two gallery, and MDAH staff has complied," the state agency said on Twitter Tuesday.

The commission will meet on Friday to decide on the final five flags, which will then be posted for public comment. The final flag will be picked in September so that Mississippi voters can vote on the new design in November.

At the commission's July 28 meeting, chair and former Mississippi Supreme Court Justice Reuben Anderson said, "We have a challenge before us, but I can assure you of one thing: we are going to design and approve a flag that Mississippi can be proud of."

In a historic move in late June, Mississippi Gov. Tate Reeves signed a bill that retired the Mississippi state flag after the state legislature passed the measure, following weeks of racial justice protests across the country.

The Mississippi state flag, first adopted in 1894, had red, white and blue stripes with the Confederate battle flag in the upper left corner.

Critics call the Confederate flag a symbol that represents the war to uphold slavery, while supporters call it a sign of Southern pride and heritage.