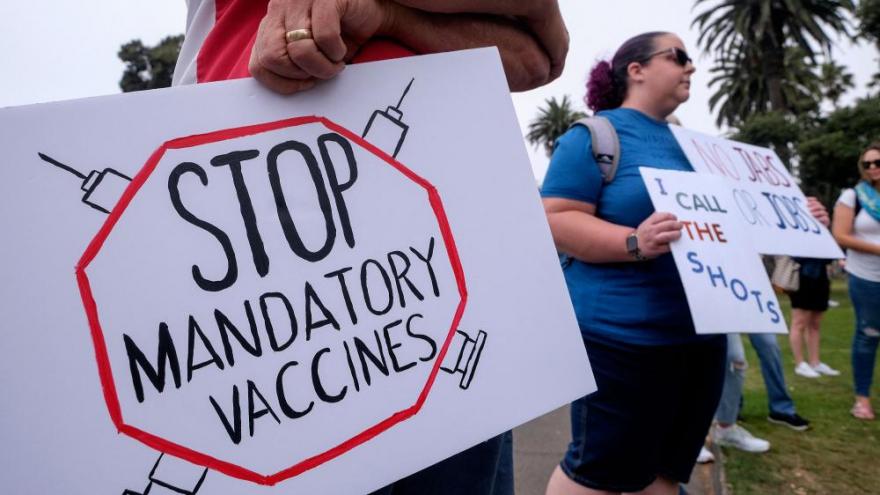 Two challengers to the Biden administration's vaccine mandate for large employers are trying to ensure that their case is decided as quickly as possible by a majority of judges appointed by Republican presidents, pictured, protesters in California, on August 29.

(CNN) -- Two challengers to the Biden administration's vaccine mandate for large employers are trying to ensure that their case is decided as quickly as possible by a majority of judges appointed by Republican presidents.

They are asking that the challenges be heard by the full federal appeals court where Republican-appointed judges outnumber those nominated by Democrats nearly 2-to-1, bypassing the possibility of a liberal-leaning three-judge panel hearing the case.

Such a move to leapfrog usual procedures would speed up resolution of the appeal by cutting out the customary step of the three-judge panel but also could have strategic benefits for the challengers who argue that the administration exceeded its authority in issuing the mandate that employers of 100 or more workers require them to get vaccinated against Covid-19.

That's because the 6th US Circuit Court of Appeals -- which was chosen by ping-pong ball lottery to hear the cases -- is composed of 10 active judges nominated by Republican presidents and six by Democratic presidents.

The thinking goes that a full panel of judges on the conservative-leaning court is more likely to rule against the government than three randomly selected judges. Under most circumstances, a dispute is assigned to a three-judge panel, and then there is an opportunity to ask the full court "en banc" to hear an appeal after the panel rules.

The Occupational Safety and Health Administration, which falls under the US Labor Department, unveiled the new rules on November 4, citing its authority to issue an emergency temporary standard to protect employees if they are exposed to a "grave danger." It requires employers with 100 or more employees to ensure that their employees are fully vaccinated or undergo regular testing and wear a face covering at work.

Eighty-four million workers at-large employers would be covered by the rules, scheduled to fully take effect on January 4.

The mandate came under immediate challenge from Republican-led states and some private employers who charge that OSHA exceeded its power. Liberal-leaning unions joined in too, arguing in some cases that OSHA has the authority to go further and issue a more stringent mandate.

The conservative Buckeye Institute, representing Phillips Manufacturing & Tower Company and Sixarp LLC, is one of the groups asking for "en banc" review. Notably, it is working with a conservative boutique law firm -- Consovoy McCarthy -- that also represented former President Donald Trump's lawyers during his battle to shield his tax returns. The firm is also behind a major affirmative action case heading to the Supreme Court.

In court papers, the Institute's lawyers argue that review by more judges on the court is necessary because the mandate presents issues of "exceptional public importance." They say that if OSAH prevails, it will raise "fundamental questions about the relationship between citizen and the government," and it will mean "there is no limit to the federal government's authority in pandemics."

A second challenger making the request is the conservative Alliance Defending Freedom, representing businesses opposed to the mandate. In court papers, its lawyers argue that it is necessary to resolve the dispute quickly because the mandate is based on a "rarely used law of questionable applicability" and was issued without following the necessary procedural protocols.

According to Jonathan Adler, a law professor at Case Western Reserve University School of Law, all of the active judges will vote on the so-called "en banc" petition. It will take a majority of the active judges on the court to grant review. It is rare on the 6th Circuit to agree to such a request, particularly before a three-judge panel has had the opportunity to rule.

"The challengers are seeking en banc review because they think this ensures them of a more favorable panel, and it's better than taking their chances on a random draw of three judges," Adler said.

At the moment, OSHA is complying with a directive from the 5th US Circuit Court of Appeals and is no longer reaching out to large private companies to help them comply with the emergency rule that mandates vaccinations or weekly testing for employees, according to the agency website.

CORRECTION: An earlier version of this story misidentified the Buckeye Institute's role in the case.