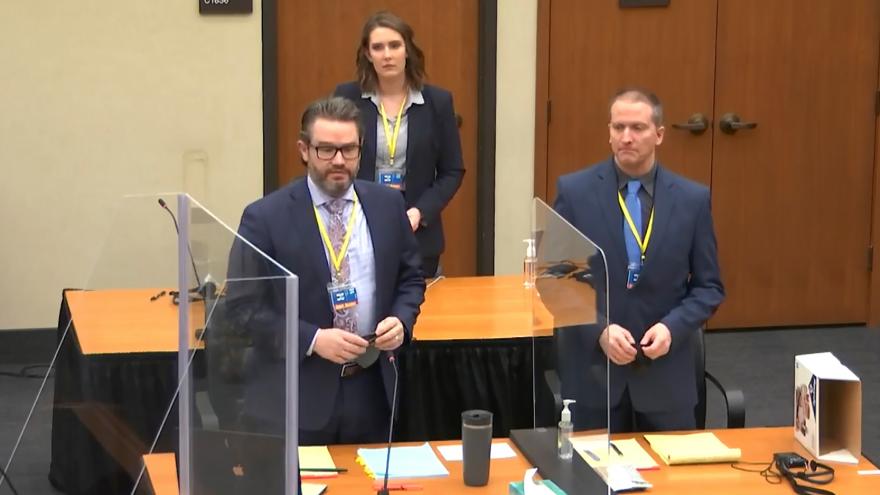 Six men and nine women have been chosen to serve on the jury in the Derek Chauvin trial in Minneapolis scheduled to begin Monday March 29.

(CNN) -- Former Minneapolis Police officer Derek Chauvin knelt on George Floyd's head and neck for 4 minutes and 45 seconds as Floyd cried out for help, stayed on his neck as Floyd flailed and had seizures for 53 seconds, and then remained on a non-responsive Floyd for another 3 minutes and 51 seconds, prosecutors said during opening statements in Chauvin's criminal trial on Monday.

"Mr. Derek Chauvin betrayed this badge when he used excessive and unreasonable force upon the body of Mr. George Floyd," prosecuting attorney Jerry Blackwell said. "That he put his knees upon his neck and his back, grinding and crushing him until the very breath -- no, ladies and gentlemen -- until the very life was squeezed out of him."

The opening statements in Chauvin's trial came 10 months after Floyd's death launched a summer of protest, unrest and a societal reckoning with America's past and present of anti-Black racism and aggressive policing. Chauvin, 45, has pleaded not guilty to second-degree unintentional murder, third-degree murder and second-degree manslaughter charges.

Blackwell emphasized that time of 9 minutes and 29 seconds -- an update on the initially reported 8 minutes and 46 seconds -- in an opening statement focused on the infamous video of Floyd's final moments, which was played for jurors in its entirety.

"This case is not about split-second decision-making," Blackwell said. "In 9 minutes and 29 seconds there are (569) seconds -- not a split-second among them. That's what this case is about."

In response, attorney Eric Nelson focused the defense's opening statement on Floyd's alleged use of fentanyl and methamphetamine and his resistance to the arresting officers.

Nelson also sought to establish doubt as to the precise cause of Floyd's death, saying it was not Chauvin's knee, but a combination of drug use and preexisting health problems. He also defended Chauvin's actions as within proper training.

"You will learn that Derek Chauvin did exactly what he had been trained to do over the course of his 19-year career," Nelson said. "The use of force is not attractive, but it is a necessary component of policing."

After opening statements, the prosecution called its first witness in the case: Jena Scurry, a Minneapolis 911 dispatcher.

The stakes of the trial

In a first for Minnesota, the trial will be broadcast live in its entirety, giving the public a rare peek into the most important case of the Black Lives Matter era.

Despite the broad societal issues its involves, the trial itself will focus on questions specific to this case, including the video of Floyd's death, his autopsy, Chauvin's mindset and ill-defined legal terms like "depraved mind" and "culpable negligence."

On Monday morning, Floyd's family members and several attorneys knelt for 8 minutes and 46 seconds outside the courthouse to commemorate the time Chauvin was originally reported to have stayed on Floyd's head and neck.

"Today starts a landmark trial that will be a referendum on how far America has come in its quest for equality and justice for all," said Floyd civil attorney Benjamin Crump.

The trial is being held at a heavily fortified Hennepin County courthouse in downtown Minneapolis, surrounded by fencing and law enforcement. Due to Covid-19 precautions, plexiglass barriers have been set up inside the courtroom and witnesses and attorneys are required to wear masks when not speaking.

Witness testimony is expected to last about four weeks, followed by deliberations. Five men and nine women have been chosen to serve on the jury, and ultimately 12 of them will decide Chauvin's fate.

The three charges against Chauvin are to be considered separately, so he could be convicted of all, some or none of them.

Floyd, 46, was born in North Carolina and raised in Houston and moved to Minnesota as an adult for a fresh start, working as security at a restaurant.

Chauvin had been an officer with the Minneapolis Police Department since 2001 until he was fired in the wake of Floyd's death.

Their lives collided on May 25, 2020, when police were called about a man who had used a counterfeit $20 bill at a Minneapolis store called Cup Foods. Two officers were directed to a parked car with Floyd in the driver's seat, and they handcuffed him and moved to put him into the back of a police car, according to the amended complaint.

Chauvin and another officer then arrived on the scene and struggled to get Floyd into the vehicle, the complaint states. Chauvin allegedly pulled Floyd to the ground in a prone position and placed his knee on Floyd's neck and head. His knee remained there even as Floyd pleaded, "I can't breathe," said "I'm about to die" and ultimately stopped breathing, the complaint says. He was pronounced dead at a hospital shortly after.

In his opening statement, Nelson indicated that officers perceived the vocal group of bystanders watching Floyd's death as a threat to their safety. "They are screaming at (the officers), causing the officers to divert their attention from the care of Mr. Floyd to the threat that was growing in front of them," Nelson said.

The final moments of Floyd's life, captured on video by appalled and angry bystanders, illustrated what Black Americans have long said about the ways that the criminal justice system dehumanizes Black people.

They have pleaded not guilty, and their joint trial will be held this summer. They are not expected to testify in Chauvin's trial.

What the trial will focus on

The trial will not debate Floyd's symbolism or the merits of Black Lives Matter. Instead, it will mainly focus on two things: the cause of death and Chauvin's intent.

The Hennepin County Medical Examiner's autopsy listed Floyd's cause of death as heart failure due to "law enforcement subdual, restraint, and neck compression," and ruled it a homicide. The medical examiner, Dr. Andrew Baker, also noted Floyd's arteriosclerotic and hypertensive heart disease, fentanyl intoxication and recent methamphetamine use as "other significant conditions."

Chauvin's defense attorney argued in opening statements that the other conditions were the real cause of Floyd's death.

"The evidence will show that Mr. Floyd died of a cardiac arrhythmia that occurred as a result of hypertension, his coronary disease, the ingestion of methamphetamine and fentanyl and the adrenaline flowing through his body, all of which acted to further compromise an already compromised heart," Nelson said.

To get a guilty verdict, prosecutors have to prove beyond a reasonable doubt Chauvin caused Floyd's death. So a series of forensic pathologists are expected to take the stand to debate this issue, including a likely contentious cross-examination of Dr. Baker.

The three charges differ primarily in how they interpret Chauvin's intent and mindset during the arrest.