Only about 2,000 people speak the Cherokee language fluently. The tribe is saving some vaccine doses for them 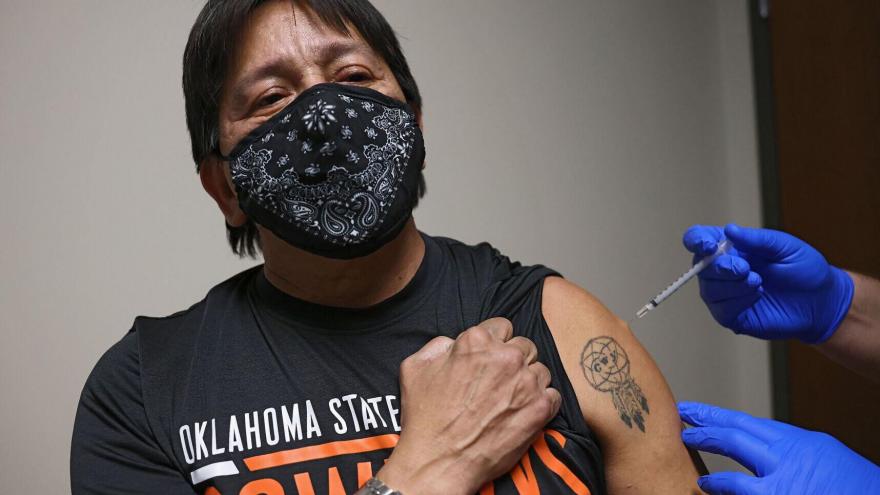 Tim King, a citizen of the Cherokee Nation and a fluent Cherokee language speaker, receives a Covid-19 vaccine in Tahlequah, Oklahoma.

(CNN) -- Even before the pandemic hit, the Cherokee Nation was dealing with a crisis: the potential disappearance of its native language.

Only about 2,000 people can speak the Cherokee language fluently. And as Covid-19 began to spread, that number started to dwindle.

So when the Cherokee Nation began receiving shipments of the Covid-19 vaccine, the tribal government identified Cherokee speakers as among the first groups to be eligible for the shot.

"When you lose a speaker and you're a tribe that has only 2,000 fluent speakers left, you've lost something that isn't just irreplaceable, as all life is, but is really a national treasure," Principal Chief Chuck Hoskin Jr. told CNN. "Whether they survive and whether they pass down their knowledge will help determine in a couple of generations if there is a Cherokee language left."

Vaccinating Cherokee language speakers alongside frontline health care workers is just the latest effort the tribe has made during the pandemic to keep this treasured population safe.

And in doing so, the tribe is not only protecting some of most revered citizens, but also ensuring the survival of its culture and identity.

More than 30 Cherokee speakers have died

In relative terms, the Cherokee Nation has fared much better than other tribes and many parts of the US in controlling the spread of the virus.

The tribe, with about 141,000 citizens living on its reservation in northeastern Oklahoma, has reported a total of more than 12,300 Covid-19 cases and 69 deaths as of Tuesday. More than 30 of those lost were native Cherokee speakers, according to the tribe.

"When I took office, preserving our language and revitalizing it was a high priority," Hoskin said. "In the midst of Covid, knowing what we're losing, it just tells me that that's the right priority and we need to emphasize it even more."

The first 975 doses of Pfizer's Covid-19 vaccine arrived in the Cherokee Nation on December 14. The next morning, the tribe started vaccinating frontline health care workers at its health complex in Tahlequah, Oklahoma.

The Cherokee Nation already had a record of its living first language speakers, thanks to an effort Hoskin initiated in 2018 when he was the tribe's secretary of state. So its staff started contacting those listed in the speaker roll book to let them know they could now schedule an appointment to receive the Covid-19 vaccine.

More than 600 speakers have been vaccinated so far, according to the tribe. The aim is to vaccinate 1,000 by the end of the week.

On January 4, the Cherokee Nation announced it was beginning vaccinations for elders aged 65 and older.

Prioritizing the vaccination of Cherokee speakers and elders has also had an unintended consequence: It has built trust in the vaccine among other citizens of the tribe.

Hoskin said he's seen some hesitation among Cherokee Nation citizens about taking the vaccine. But the tribe's decision to vaccinate native speakers early helped ease the anxieties that some people might have otherwise had, he added.

"People revere elders in the Cherokee Nation," he said. "I think when they saw that group of people being made a high priority and celebrating it, that surely has built some confidence."

Sandra Turner got her first vaccine dose in December and received her booster shot last week.

Turner, 64, grew up speaking Cherokee at home in a family of 11 children. Until about first or second grade, she didn't even know English. And even then, she and the many other Cherokee students at her school would speak to each other in the language they knew best.

Turner, who lives in Salina, Oklahoma, knows firsthand the threat that Covid-19 poses to her mother tongue. Just last week, she attended the funeral of her children's father, who died of the virus and spoke the language fluently like herself.

So when Turner received an email informing her that she could receive the vaccine, she says she was grateful.

"We have been losing a lot of our fluent speakers due to the virus," she said. "And I was ready. I said, 'I'm getting in line.'"

As one of the few people left whose first language was Cherokee, John Ross, 65, says he felt a responsibility to get the shot as soon as it was available to him.

Ross, who lives in Fort Gibson, Oklahoma, is a translator for the Cherokee Nation. He's actively worked to preserve the language he grew up with, including getting Cherokee on Microsoft Office programs and making vaccine information from Pfizer and Moderna available in Cherokee. And it's important that that work continues.

"As a Cherokee speaker, there's probably less than 2,000 speakers left like me that's alive on the face of this earth," he said. "They want to keep us as long as we can because we try to help out to preserve our language to the young ones or whoever wants to learn."

Fortunately for those interested in learning Cherokee, Ross received his final dose of the vaccine last week.