Only 10 states are seeing downward trends in new Covid-19 cases, and NYC now has a surge 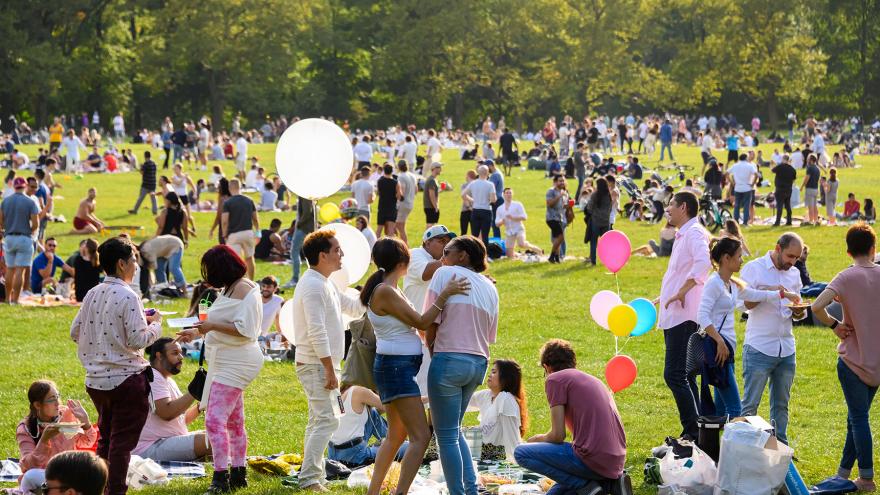 (CNN) -- In this uphill battle against Covid-19, letting your foot off the gas too soon can send you backward.

That's what places like New York City are discovering after months of steady progress in fighting the pandemic.

And this is a very bad time to be going backward, as Americans face a trio of major challenges this fall: more indoor gatherings, a potential coronavirus-and-flu "twin-demic," and trying to get or keep students back in school safely.

Nationwide, 21 states reported more new cases this past week compared to the previous week, according to data from Johns Hopkins University.

Track the virus in your state and across the US

But in many states, "it's not only that the number of infections keeps on going up. It's also that the test positivity rates are trending in the wrong direction," emergency medicine physician Dr. Leana Wen said Monday.

"That means that not only do we have increasing infections in these states, we also don't have nearly enough testing."

Cases 'grow at an alarming rate' in parts of NYC

For the first time since early June, New York state reported more than 1,000 new cases Saturday -- prompting Gov. Andrew Cuomo to warn that this virus "remains a force to be reckoned with throughout the country."

"It's vital that New Yorkers continue to practice the basic behaviors that drive our ability to fight Covid-19 as we move into the fall and flu season," Cuomo said. "Wearing masks, socially distancing and washing hands make a critical difference."

In New York City, "COVID-19 cases continue to grow at an alarming rate in eight neighborhoods in the city, outpacing the citywide average by 3.3 times over the past 14 days," the city health department said Sunday.

New York state was once the US epicenter of this pandemic, but the rates of new cases, hospitalizations and deaths have plummeted in recent months.

The decreases came after New York shut down and mandated masks in public early. The state also ramped up testing capabilities on its own when testing was scarce nationwide.

That's especially true as public schools in New York City reopen to students this week. But officials could decide to close schools, limit gatherings and issue fines for not wearing masks.

Nationwide, more than 7.1 million people have been infected with coronavirus, and more than 204,000 have died, according to Johns Hopkins data.

And health experts warn the US could see an explosion of new infections this fall and winter if people get more lax about precautions and spend more time indoors.

Authorities crack down on large gatherings

Weddings and other social events have spawned outbreaks nationwide, with deaths linked to a wedding in Maine and the Sturgis Motorcyle Rally in South Dakota.

Now authorities are stepping up efforts to end gatherings where the virus can easily spread.

Both the owner and manager of the venue face multiple misdemeanor charges.

In Maryland, a man was sentenced to a year in prison Friday after holding two large parties in late March in violation of the state's social distancing rules, which banned gatherings of more than 10 people, Gov. Larry Hogan's office said.

The man started arguing after he was told to disband his first party of about 50 people, the state attorney's office said. Five days later, he held a second party of more than 50 people that he refused to end, saying they had a right to congregate.