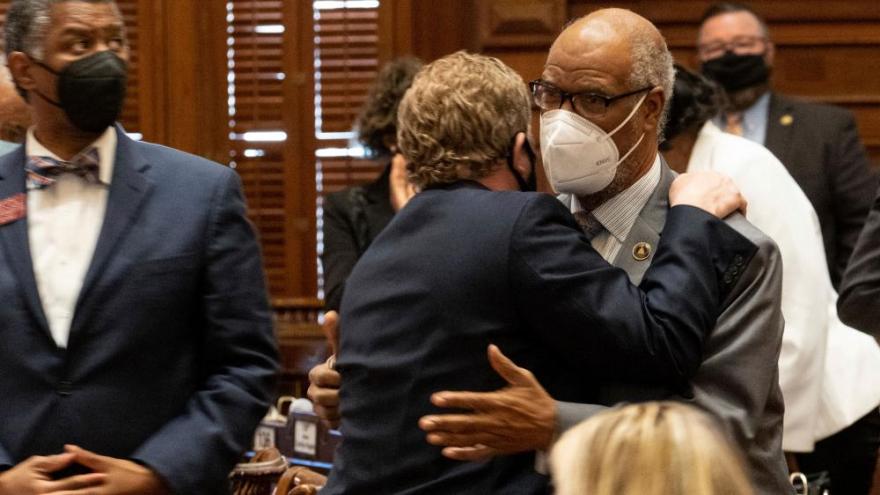 Georgia's House of Representatives has unanimously passed a bill that would roll back citizen's arrest law in the state. In this image, Rep. Bert Reeves left, hugs Rep. Calvin Smyre after the unanimous passage of HB 479 on Monday.

(CNN) -- Georgia's House of Representatives has unanimously passed a bill that would roll back citizen's arrest law in the state.

Monday's passage of the bill came just over a year after Ahmaud Arbery was shot and killed in Brunswick, Georgia, while jogging. If HB 479 makes it through the state Senate and is signed by Gov. Brian Kemp, Georgia would be the first state in the nation to overhaul a citizen's arrest law.

Arbery, who was black, was out jogging on February 23, 2020, when Gregory McMichael and his son, who are white, chased him after him, authorities said.

The killing sparked outrage after a disturbing video of the shooting emerged online.

The state's Civil War-era citizen's arrest law was originally enacted to enable Georgians to capture fugitive slaves. "This law's origins don't come from the purest of places by any stretch of the imagination," Republican state Rep. Bert Reeves, lead sponsor of the new bill, told CNN.

"After (Arbery's death) in Georgia last February, it is incumbent on us to act, to make sure that nobody can ever use this outdated, archaic Civil War-era law to chase somebody down, (resulting) in their death," he said.

Democratic Rep. William Boddie, a co-sponsor of the bill, told CNN that he hoped under the new law, "citizens will not feel empowered to execute a citizen's arrest, because they cannot use it as a defense."

Reeves and Boddie were happily surprised by the unanimous vote. "There isn't a single person in this building that thought that bill was going to pass unanimously," said Reeves. "This is a really awesome opportunity for Georgia to be a leader in the country."

Boddie expects that the bill will have similar success in the Georgia Senate, and Gov. Kemp has already expressed his support.

"The unanimous passage of HB 479 by the Georgia House is an important step in our efforts to root out injustice in the Peach State, while also protecting the sacred right to defend oneself and others," said Kemp in a news release.

Police officers outside of their jurisdictions would still be permitted to make arrests. Other exceptions include business owners, who can detain suspects of shoplifting for up to one hour, during which time they must contact the police.

The new law would not affect self-defense statutes already on the books, a mischaracterization that Reeves has fought hard to counter.

"A citizen's arrest, if it's a football game, is offense," not defense. "That's all laid out in Georgia law, it's very clear."

"One of the greatest opportunities that anybody in the (Georgia) General Assembly has is to be able to correct a wrong that previously took place in that room," said Reeves.

"In 1863 the General Assembly sat in that room and they enacted a law. And a lot of bad things have come from that law. And now, in 2021, we've got the opportunity to right that wrong."

"We can never bring Ahmaud Arbery back," said Boddie, "I hope that we did the right thing to try to do right by Ahmaud Arbery by passing the citizen's arrest repeal law in the state of Georgia."