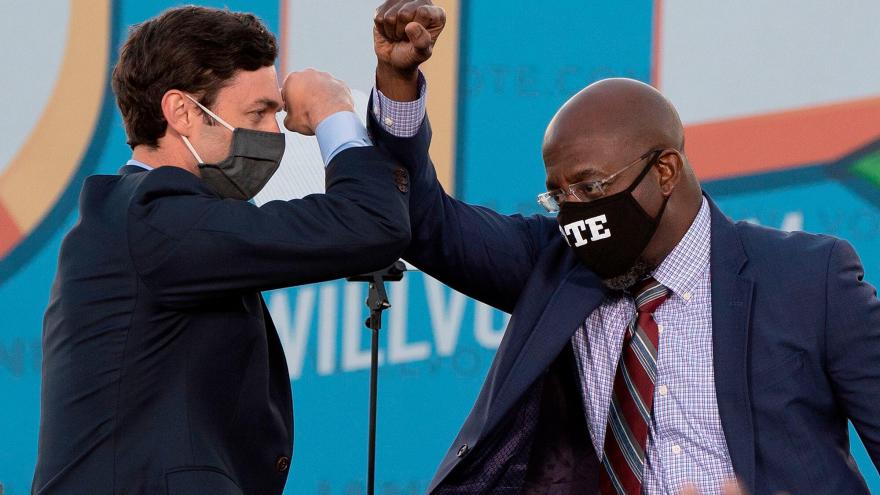 Jon Ossoff, left and Raphael Warnock bump elbows during a rally with US President-elect Joe Biden in Atlanta on January 4.

(CNN) -- After a nightmarish 2020 of relentless bad news, this year seemed like a fresh start.

That was behind us. Or so we thought. Then came January 1, and the daily barrage of news -- good and bad -- hasn't slowed down.

In the first week of 2021 we've set a US record for coronavirus cases and deaths, watched in horror as angry mobs breached the Capitol and witnessed a beleagured President facing a possible second impeachment.

Each of these stories would dominate headlines for a few days on their own. But with the unrelenting flood of news, there's barely time to savor the wins or mourn the losses.

"This has been a particularly crazy, unbelievable news cycle because of the magnitude of the events. "I don't recall anything like it," says Rick Rodriguez, a professor at Arizona State University's Cronkite School of Journalism.

"This year, the news cycle seems never to get a breather," he adds. "I've found myself watching news or refreshing my news feeds nonstop, from the moment I awaken to the wee hours of the morning."

Here are just some of 2021's headlines

Nine days into this year, we have already seen:

So here's how we cope with all this

As we cautiously wade into the new year, one expert is urging we strike a delicate balance.

2020 taught us there's no pressure to feel joyous during stressful times. And recent events have taught us to avoid overly positive views of the future, says Dr. June Gruber, an associate professor of psychology at the University of Colorado.

"Rather, we must adopt a more realistic view of the current events and contexts we are in, and generate calls to action in light of this," she says. "This does not mean that hope should be diminished but that it must exist alongside the lighter and darker aspects of humanity and the world."

Frustration or sadness are perfectly appropriate responses to an uncertain and tumultuous environment, Gruber says.

She emphasizes the importance of coping strategies because sustained stressors can make people vulnerable to mental health problems.

One way to cope is by reminding yourself that even though things may feel overwhelming at times, it's just momentary.

"Emotions are like ocean waves -- they will peak, but a wave doesn't last forever," Gruber says.

So let's not write off 2021 yet. And if this cascade of news doesn't stop, we'll raise a glass to 2022. Maybe things will be better by then.