One reason Meghan suffered racist UK coverage: The media is not diverse 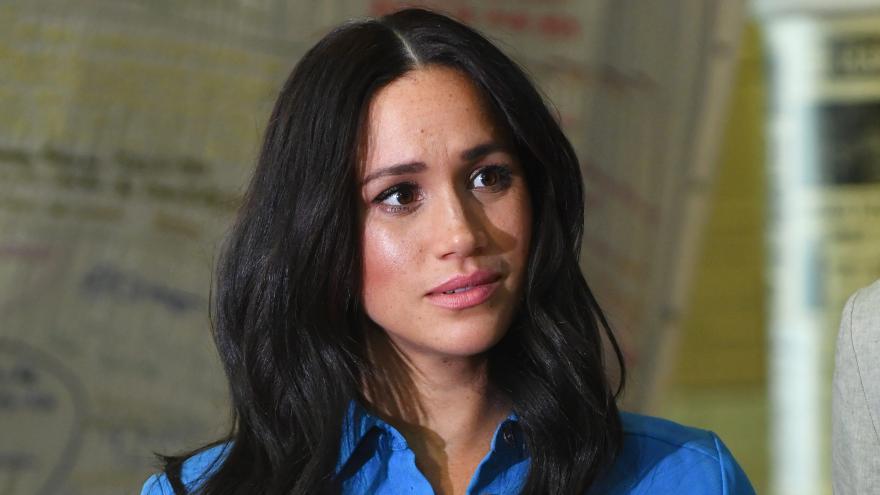 (CNN) -- When British newspapers first broke the news of Prince Harry's relationship with Meghan, the Duchess of Sussex, one Mail Online headline declared that she was "(almost) straight outta Compton." Around the same time, The Daily Star ran a headline asking whether Harry would "marry into gangster royalty?"

The first round of headlines back in 2016 played on harmful stereotypes and helped set the tone for how parts of the UK media, and especially its tabloid newspapers, would treat this newcomer to the royal family who stood out in one very obvious way: her race.

Over time, race would become a major factor in the relationship between Meghan and the tabloids, which devote huge resources to coverage of the royals and often deliver fawning reportage of the House of Windsor. Meghan and Harry have sued several papers, and singled out the tabloids for waging a "ruthless campaign" against them.

On Sunday, in a bombshell interview with Oprah Winfrey, the Duke of Sussex said that there had been no support from the royal family in the face of racist treatment of Meghan by the British press. "No one from my family said anything over those three years," Harry said. The coverage "was bringing out a part of people that was racist," Meghan added.

This is not the first time that the UK media has been accused of fueling prejudice. A 2016 report by the European Commission against Racism and Intolerance found that hate speech among traditional media, particularly tabloid newspapers, "continues to be a serious problem."

Critics say that the media's treatment of Meghan, which contrasts starkly with the often positive coverage given to her sister-in-law Kate Middleton, the Duchess of Cambridge, is at least partly explained by a lack of newsroom diversity. Too few of the editors and reporters at major UK publications come from diverse backgrounds, they say.

The "right-leaning media" are "leading the charge against Meghan for absolutely no reason other than because she's Black," said Marverine Duffy, director of undergraduate journalism at Birmingham City University and a member of the editorial board of the Sir Lenny Henry Centre for Media Diversity.

In a society in which millions of people come from diverse racial and ethnic backgrounds, the British press remains stubbornly White.

A report by the Reuters Institute for the Study of Journalism in 2016 found that just 6% of journalists across UK newsrooms don't identify as White, compared with about 13% of the general population. The same study found that while Black Britons make up 3% of the population, they account for just 0.2% of journalists.

According to a report last July from the Reuters Institute, none of Britain's top 10 print, digital or broadcast outlets have a Black editor in chief. And a study by Women in Journalism, a campaigning organization, found that during one week in July not a single story by a Black reporter appeared on the front pages of the 11 most widely read UK newspapers.

UK tabloids have faced repeated allegations from media commentators, their own readers and Harry that their negative coverage of Meghan has racist undertones.

But there is a refusal among the press to see this coverage as "racist bullying," said Duffy.

"Racism is denied in general," she told CNN Business. There is a tendency to deny it because Meghan is "rich and married into the royal family," she added. "Racism happens no matter your age, class, money, status, job. It still affects you."

The press coverage of Meghan eventually led 72 female members of the UK parliament to write a letter to the Duchess in 2019 expressing solidarity with her in the face of the "outdated, colonial undertones" of some media stories.

On Monday, the UK Society of Editors pushed back against Harry and Meghan's allegations of racism. Executive director Ian Murray said in a statement that it was "untrue" that sections of the UK press were bigoted.

"It is not acceptable for the Duke and Duchess to make such claims without providing any supporting evidence," he added, pointing to "universal supporting coverage" in the media of their marriage. "That warmth could not and should not mean the press should be expected to refuse to report, investigate and comment on the couple's lifestyle and actions," Murray said.

A few days after the Mail Online and Daily Star articles published in November 2016, Kensington Palace issued a highly unusual statement on behalf of Harry that scolded the British press over its treatment of Meghan.

The relationship between UK media and the Duke and Duchess of Sussex only deteriorated from there, leading the pair to eventually end all engagement with the major tabloids last April and resulting in legal action.

On Monday, a deluge of negative coverage followed Harry and Meghan's interview with Oprah, which the Daily Express described as "self-serving." "MEGHAN ACCUSES PALACE OF RACISM," was the front page headline of the Daily Mail.

CNN Business reached out to the leading UK tabloids for this article including the Daily Mail, Reach Plc, which publishes the Mirror and the Express, and The Sun's publisher News UK.

They did not provide comment on their coverage of Meghan and failed to answer questions about the racial makeup of their newsrooms, but pointed to various initiatives aimed at promoting the diversity of editorial staff, including training programs for journalists who do not identify as White.

"We have done a lot of work to understand the ethnic make up across the whole of our business. And we recognize we have some distance to travel," a spokesperson for News UK said.

Experts say the identity of journalists matters because it determines the types of stories that are told and the views that are most often represented.

"You cannot really have fully inclusive content, fair, accurate and balanced if you don't have diversified newsrooms," said Milica Pesic, executive director of the Media Diversity Institute, an international nonprofit.

"That doesn't mean that only gay people should cover gay issues or only blind people cover issues affecting blind people, but having colleagues from different backgrounds changes your own perspective," she added.

In an example of how people from different backgrounds can have very different perspectives on the same issue, CNN's June 2020 Confronting Racism poll found that Black Britons are three times more likely than White Britons to say that Black celebrities are treated worse than their White counterparts by the British media.

The identity of the people who write and edit news "matters greatly" to how the public thinks about its relationship with the media, said Rasmus Nielsen, director of the Reuters Institute for the Study of Journalism. "It gives people a sense of belonging and community with news media to also see people like themselves," he told CNN Business.

Although we can all understand the world well beyond our personal experience, there's a difference between "contemplating racism intellectually" and experiencing it on a daily basis, Nielsen added.

"Personal experience really matters," he said. "It can be difficult for a newsroom to understand the depth and nuance of a topic if no one in that newsroom has experienced that thing or seen their family or loved ones experience it."

There is an increased sense of urgency among UK companies to tackle systemic racism following the wave of Black Lives Matter protests that swept across Britain last summer. This has extended to the news media.

For example, Reach Plc, News UK and other outlets have created new roles to spearhead newsroom diversity and inclusion efforts, and made public commitments to address racial inequality.

But there's a long way to go.

The lack of diversity among senior editorial staff poses perhaps the biggest challenge. "Editors are driving the news agenda and hiring and firing. Yes there are Black journalists in newsrooms, but when you're in the significant minority very rarely will you feel able to stand up and say something," said Duffy of Birmingham City University.

"You can see pockets of change and I absolutely applaud it, but fundamental change will not happen until there are more Black people in senior positions with editorial decision making power."