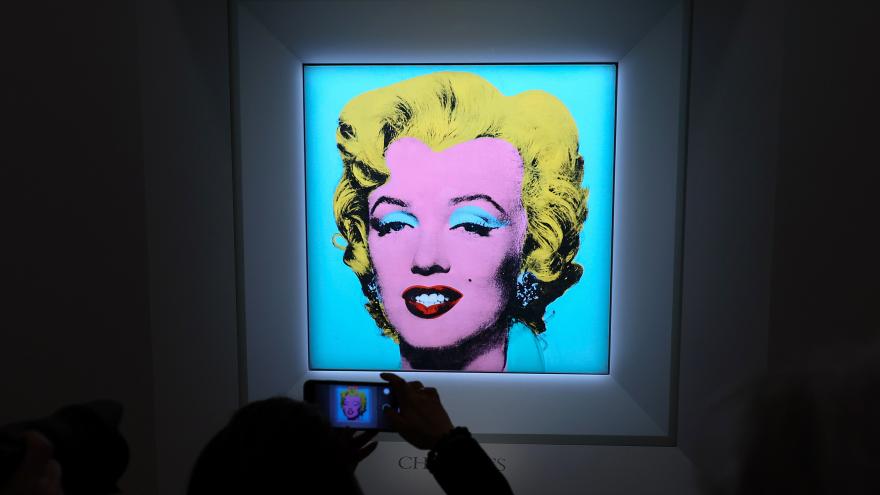 (CNN) -- One of Andy Warhol's iconic Marilyn Monroe portraits could become the most expensive 20th-century artwork ever to go under the hammer, with auctioneer Christie's expecting bids "in the region of" $200 million.

The 40-square-inch "Shot Sage Blue Marilyn," one of dozens of images the artist made of Monroe in the 1960s, will go on sale in New York this May, the auction house announced Monday.

Warhol's colorful reproductions of the Hollywood star's portrait -- originally a publicity still from her 1953 movie "Niagara" -- are among his most recognizable works, alongside his signature paintings of Campbell's soup cans.

Using a technique called silkscreen printing, which duplicates images on paper or canvas using a layer of fine-mesh silk like a stencil, he began producing them in 1962, shortly after Monroe's death. As with his depictions of other famous figures, including Elvis Presley and Chinese leader Mao Zedong, the Pop artist created numerous versions of Monroe's portrait in various different colors and configurations.

Among the best-known is "Marilyn Diptych," owned by British gallery group Tate, which saw Warhol print a grid of 50 portraits across two canvases. Elsewhere, the Museum of Modern Art's "Gold Marilyn Monroe" features a single image printed against a gold background, while "Shot Marilyns" saw the artist shooting portraits of the star through the head with bullets.

In 1964, he developed a "more refined and time-intensive" new process that was "antithetical to the mass production he was best known for," according to Christie's. That year, he used his it to create a limited number of portraits -- a rare group of works to which "Shot Sage Blue Marilyn" belongs -- before abandoning the technique.

A handful of paintings are thought to have attracted price tags in excess of $200 million in private sales (including works by the Abstract Expressionist painters Willem de Kooning and Jackson Pollock), though the feat has only once been achieved at auction -- by Leonardo da Vinci's "Salvator Mundi," which in 2017 sold for over $450 million. The current auction record for a 20th-century painting is the $179.4 million paid for Pablo Picasso's "Les Femmes d'Alger (Version O)" in 2015.

The current auction record for a work by Warhol is held by "Silver Car Crash (Double Disaster)," which depicts the mangled aftermath of a road collision, after it sold for more than $105 million almost a decade ago. Several of his Marilyn images have also attracted huge sum at auction in recent years, with 1962's "White Marilyn" selling for $41 million in New York in 2014.

"Shot Sage Blue Marilyn," meanwhile, was owned by a succession of high-profile gallerists and collectors before being purchased by the late Swiss art dealer Thomas Ammann. It is being offered for auction by the Thomas and Doris Ammann Foundation Zurich, the charitable organization set up in his (and his sister's) name, which will use the proceeds to fund health and education programs for children worldwide, according to a press release.

Described by Christie's as "one of the rarest and most transcendent images in existence," the portrait has been shown at galleries including the Guggenheim Museum in New York, the Centre Pompidou in Paris and London's Tate Modern.

In a press statement Christie's chairman of 20th and 21st century art, Alex Rotter, described the work as "the absolute pinnacle of American Pop" and "the most significant 20th century painting to come to auction in a generation."

"Standing alongside Botticelli's 'Birth of Venus,' Da Vinci's 'Mona Lisa' and Picasso's 'Les Demoiselles d'Avignon,' Warhol's 'Marilyn' is categorically one of the greatest paintings of all time," he added, "and it's a once in a generation opportunity to present this masterpiece publicly at auction."