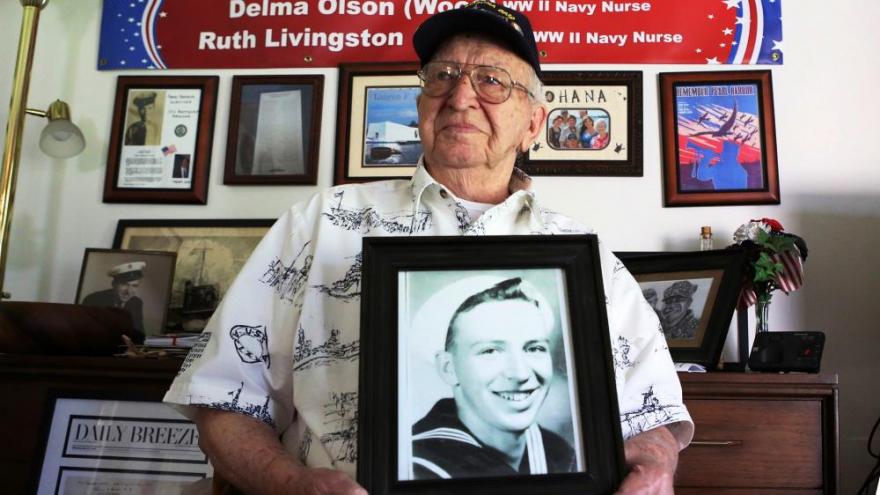 Lauren Bruner is the last survivor of the USS Arizona to have his remains interred on the submerged ship in Pearl Harbor.

(CNN) -- A World War II veteran who was the second-to-last man to escape the USS Arizona during the Japanese attack on Pearl Harbor was interred on the ship's wreckage on Saturday.

Lauren Bruner, one of 334 crew members to survive the December 7, 1941, attack, died September 10, just months before his 99th birthday.

Loved ones gathered at sunset at the USS Arizona Memorial in Honolulu. Family and friends handed Bruner's ashes over to divers who placed the urn inside the well of the barbette on gun turret No. 4. A barbette is an armored structure protecting a gun turret on a warship.

The memorial can be reached only by boat as it was built above the submerged hull of the sunken battleship. The hull is a tomb for more than 900 sailors who remain within and serves as an artificial reef providing habitat for marine life.

Only the remains of USS Arizona survivors can be interred on the sunken battleship. Pearl Harbor survivors can have their ashes scattered over the harbor.

Bruner was on the sky control deck when the ship was struck by several bombs, igniting explosions that killed 1,177 Arizona crew members. He was one of a handful of sailors on deck to survive the catastrophic explosion when a bomb struck the Arizona's forward magazine.

After the explosion, he crossed 70 feet of burning water by going hand over hand on a line thrown to him and six other survivors to reach the repair ship USS Vestal, his cousin, Sharon Bruner, told CNN. Bruner suffered burns on nearly 80 percent of his body and was wounded by Japanese gunfire.

He recovered from his wounds and returned to sea, serving aboard the destroyer USS Coghlan in eight more battles against the Japanese, according to the Navy. He finished the war as a fire control chief on the Coghlan, steaming into Nagasaki harbor only days after the atomic bomb explosion.

Bruner is the 44th and last USS Arizona survivor to be interred, according to Emily Pruett, a spokeswoman for the Pearl Harbor National Memorial.

"The wrecks of only two vessels remain in the harbor — the Arizona and USS Utah — so survivors of those ships are the only ones who have the option to be laid to rest this way," Pruett told CNN.

The rest of the ships struck that day were either repaired or scrapped, she said.

The last three living survivors of the USS Arizona plan to be laid to rest with their families.