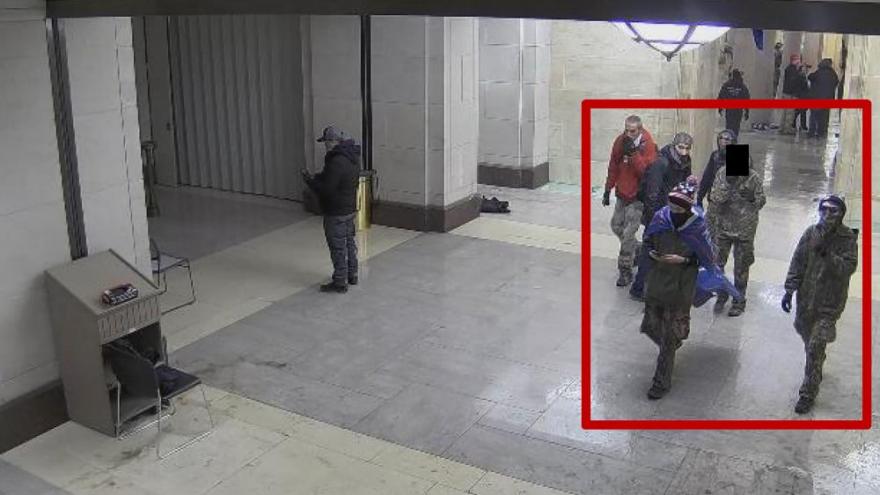 Kristi Munn, Tom Munn, Dawn Munn, Josh Munn and Kayli Munn in the US Capitol on January 6, 2021. The Justice Department obscured a portion of this image to protect the identity of a minor.

(CNN) -- A Texas man pleaded guilty on Thursday in federal court to climbing through a broken window and walking around the US Capitol with his parents and sisters on January 6, 2021.

Josh Munn, 24, pleaded guilty to illegally protesting inside the Capitol. He could face up to six months in prison when he is sentenced in August, according to the plea agreement read aloud in court, and will pay $500 for damage done to the building.

During the hearing on Thursday, Munn admitted that he entered the Capitol with his parents, Tom and Dawn, and three of his sisters. The parents and two sisters, Kristi and Kayli, are also facing charges. They have all pleaded not guilty.

Josh Munn is one of many Capitol riot defendants charged with family members, though the Munn family is the largest group of relatives to be charged together to date.

Munn said that at first, he was hesitant to go to the January 6 rally because he was saving his money for a move to Wisconsin. But when his parents offered to pay for the trip, Munn said that he would be "happy to go."

After the riot, Munn family members boasted of their participation on social media.

"Before you hear it on the news I am I [sic] family marched on DC today it was extremely cool" Munn wrote on Facebook on January 6. He said that his family was among the "second group" of people to enter the building and that the violence that day "came from the police believe it or not."

In response to his messages, Munn told US District Judge Beryl Howell on Thursday that, "I was still trying to calm myself down at that point. I was trying to make myself bigger than I was."

"I regret making the officers the villains in the situation," he added. "They were just doing their job."