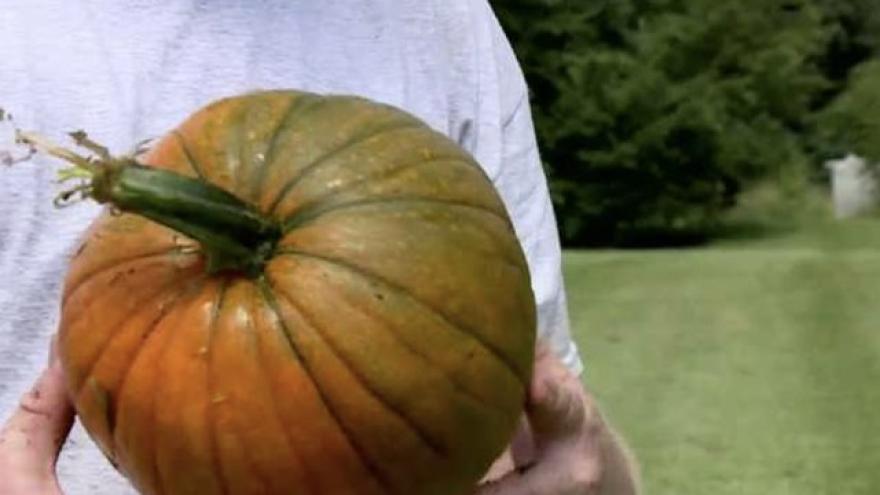 BOWERSVILLE, Georgia (WYFF) -- Dusty Smith, owner of Smith's Farms in Bowersville, Georgia, has been in the business of farming with specific interest in growing pumpkins for 16 years.

The last four years, Smith has committed his time to landscaping during the day and commercial pumpkin farming by night.

As a two-time record holder for pumpkins pertaining to weight and breed in the state of Georgia, Smith recently came up with the idea to do something he said has never been done before. He created chemical mixtures to grow glow-in-the-dark pumpkins.

“I’ve got a fertilizer injector, and all of the chemicals I use are so expensive, they’re flowable," Smith said. "Which means you put it in a bucket and the fertilizer injector just breaks off from the main line and it creates the suction.”

Smith said he uses drip tape through each row of the pumpkin patch to feed the crop. He said only a certain breed will accept the blend, while other pumpkins will die off.

“I got some plant pathologist that I talked to, and ain't nobody ever accomplished it, so I’m pretty excited,” Smith said. "I mix some chemicals in when I feed them and water them, and it drinks it up then distributes it out through the pumpkin.”

Smith said during the day, sunlight or UV light charges the pumpkins. The glow-in-the-dark aspect of certain pumpkins can be seen during the day by using a UV light.

Smith said he wanted to experiment and come up with a way to grow glow-in-the-dark pumpkins instead of just painting the pumpkins, to challenge himself, create something he could be proud of as well as having what he calls the real deal.

Smith said he plans to open the farm to the public this season on September 16. Smith is working on hayrides for kids, and pumpkins for purchase, as well as offering the public an opportunity to see the glow-in-the-dark pumpkins.

Smith said by next year, he hopes to have a full "haunted" pumpkin patch trail lined with the glow-in-the-dark pumpkins for all to enjoy.