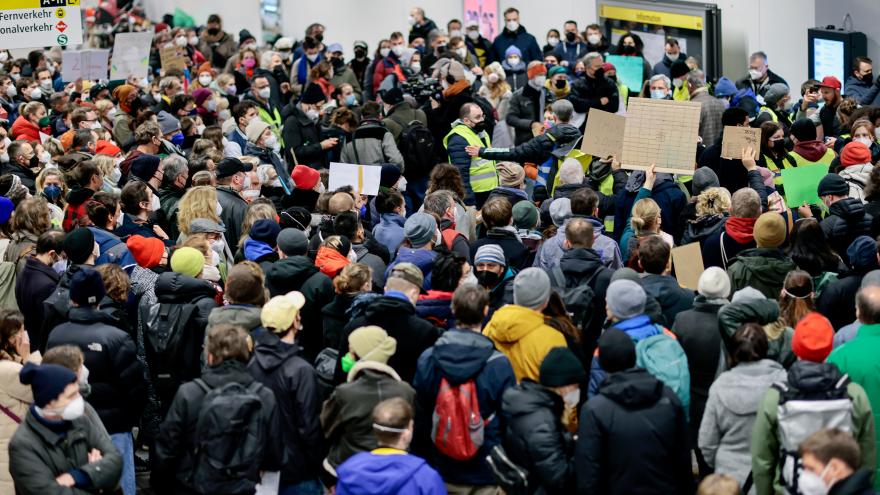 (CNN) -- Russia's relentless bombardment of residential areas across Ukraine has so far forced more than one million refugees to flee the country, according to the United Nations, as fierce fighting continues into its second week.

In the capital Kyiv, residents were awoken in the early hours of Thursday morning by at least one large explosion in the southwest of the city, following a day of heavy shelling. To the south, the mayor of the strategically important city of Kherson on the Black Sea indicated that Russian forces had seized control, though claims remain disputed. And in the port city of Mariupol, residents are without electricity and water, according to the mayor, as Russian troops step up their offensive.

Ukrainian resistance in the country's second biggest city, Kharkiv, also continues to hold out, as Russian strikes hit at least three schools and damaged a cathedral and shops on Wednesday, according to videos and photos posted to social media, geolocated and verified by CNN.

With the scale of the humanitarian disaster becoming ever more apparent, the International Criminal Court announced Wednesday it had opened an immediate active investigation into possible war crimes committed by Russian forces in Ukraine.

ICC Prosecutor Karim A.A. Khan said in a statement Wednesday his office "had already found a reasonable basis to believe crimes within the jurisdiction of the Court had been committed, and had identified potential cases that would be admissible."

The move comes as the United States and other Western officials warned that Russian President Vladimir Putin could be shifting his strategy to further target cities and civilian infrastructure with heavy weapons and potentially "tens of thousands" of troops.

The Russian government has "strongly" rejected accusations that it has committed war crimes in Ukraine.

On Wednesday, the United Kingdom said it was "gravely concerned" by "reports of the use of cluster munitions" by Russia during its ongoing invasion of Ukraine. And earlier that day, US Ambassador to the UN Linda Thomas-Greenfield said Russia was moving banned weaponry into Ukraine.

"We have seen videos of Russian forces moving exceptionally lethal weaponry into Ukraine, which has no place on the battlefield. That includes cluster munitions and vacuum bombs -- which are banned under the Geneva Convention," she said. Vacuum bombs, or thermobaric bombs are filled with high-temperature, high-pressure explosives and when detonated suck in the oxygen from the surrounding air to generate a powerful explosion and a large pressure wave that can have enormous destructive effects.

There is no evidence that thermobaric weapons have been used in the conflict in Ukraine, though CNN saw Russian thermobaric multiple rockets launcher south of Belgorod, Russia, on February 26.

The Russian advance in the south of Ukraine shows the beginning of a potential land bridge that could link the port city of Odessa, through Kherson and Mariupol to the separatist-held pro-Moscow territories in the east.

"It is quite clear that Putin is pushing for a land corridor to Crimea. I mean that is an obvious objective," NATO's former Deputy Supreme Allied Commander for Europe Richard Shirreff told CNN.

He said he feared the push could cause a humanitarian catastrophe as civilian deaths rise and cities become ruins.

The mayor of the southern strategic city of Kherson, Ihor Kolykhaiev, said Wednesday the Ukrainian military is no longer in the city and that its inhabitants must now carry out the instructions of "armed people who came to the city's administration" -- indicating that the city has now fallen under Russian control.

The announcement on the mayor's Facebook page late Wednesday follows several days of pressure on Kherson by Russian forces who had surrounded the city.

However, Pentagon press secretary John Kirby pushed back, suggesting that while Russian forces were claiming to have seized Kherson, the US was not in a position to call it either way. "It appears to us that the Ukrainians are certainly fighting over that town," added Kirby.

Videos verified by CNN show residents defiantly waving the Ukrainian flag in front of what appear to be Russian troops and tanks. In one video, a Russian soldier appears to be holding Ukrainian flags as he stands near other troops and tanks in front of the Kherson Regional Administration building. A group of civilians then appear to walk toward him to reclaim the flags.

Kherson is a strategically important city on an inlet from the Black Sea with a population of nearly 300,000. If Kherson is now under Russian control, it would be a significant turning point for the invading military -- the first major city seized. Earlier Wednesday, Ukraine disputed Russian claims of control saying Ukrainians forces were still fighting in parts of the city. The new post said Ukrainian forces had left.

And fighting continued around the southern city of Mariupol -- a key part of that possible corridor -- on Wednesday, with residents reporting heavy shelling that left dozens injured. Vadym Boychenko, the mayor of Mariupol, said the number of wounded civilians was "growing every day" as Russian and Russian-backed separatist forces surround the city of some 400,000 people on three sides.

Boychenko said critical infrastructure was compromised in the city and said citizens are without water and electricity and utility services will work to restore them on Thursday. He called all citizens of Mariupol "great heroes."

Warnings of a humanitarian catastrophe

It's unclear exactly how many Ukrainian civilians have been killed during the war, but the United Nations Human Rights Monitoring Mission estimates there have been 750 civilian casualties. CNN cannot independently verify these numbers but there are fears of further casualties as Russian strikes hit built-up areas.

Many have chosen not to stay to risk being caught in the violence.Filippo Grandi, UN High Commissioner for Refugees, said one million people had fled Ukraine to neighboring countries in the week since the invasion began.

"For many millions more, inside Ukraine, it's time for guns to fall silent, so that life-saving humanitarian assistance can be provided," Grandi said.

Most of the refugees have fled to Poland, to Ukraine's west, with large numbers also entering Hungary, Moldova, Romania and Slovakia. Dramatic video filmed Wednesday showed crowds of people on a platform at Kharkiv train station queuing to get on a train to Uzhgorod, in the west, carrying their children and pets as they fled an assault on the city.

Worryingly, a "big number" of those crossing into Poland are unaccompanied children, according to Poland's Ambassador to the UN Krzysztof Szczerski. Many children crossing the border are leaving behind parents -- particularly their fathers, who have been called by the Ukrainian government to stay behind and fend off Russian troops, he said.