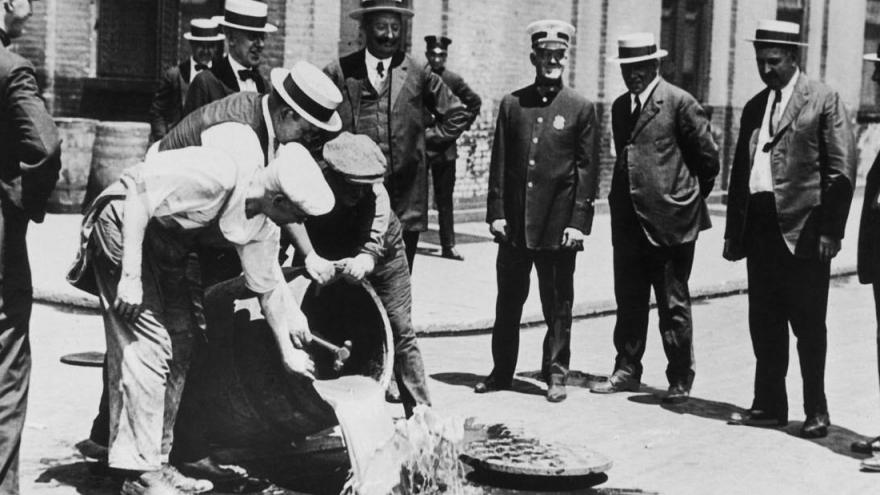 On this day 100 years ago, Prohibition went into effect -- banning the production, importation, sale and transportation of alcohol in the US. Alcohol is poured away into a New York sewer during the prohibition era, circa 1920.

(CNN) -- Clutch your adult beverages a little tighter, everyone.

On this day 100 years ago, Prohibition went into effect -- banning the production, importation, sale and transportation of alcohol in the US.

It all started with the temperance movement, which encouraged and advocated for abstinence from alcohol. Much of the reasoning was based on ideas of Christian ethics, and many Christian denominations were active in the movement.

One of the most influential groups was the Women's Christian Temperance Union, for example, which was founded in 1873. Another influential group was the Anti-Saloon League, founded 20 years later, which also helped advocate for prohibition with the intent of making it nationwide.

Heavy drinking culture was seen as detrimental to a Christian society -- and with increasing industrialization and immigration from Europe came heavier drinking, the reasoning went.

The brewing industry was also thriving at the time, which meant saloons were becoming increasingly prolific throughout the country. And many saloons would introduce vices like gambling and prostitution into their businesses to help them turn profits.

On January 16, 1919, the 18th Amendment was ratified. And it officially went into effect on January 17, 1920 -- despite the efforts of then-President Woodrow Wilson.

The amendment didn't specifically outlaw the consumption of alcohol, though, so people stockpiled reserves of their favorite drinks.

But Prohibition wasn't really that successful. Data does show that Americans drank less during the period -- despite myths surrounding the Roaring '20s -- but crime only grew more rampant. Bootlegging was widespread, and gangsters like Al Capone profited immensely off the illegal distillation and sale of alcohol. Increased gang activity also led to more violence, like the Saint Valentine's Day Massacre.

Then came the Great Depression. With the entire country suffering, the tax revenue from alcohol sales grew evermore appealing. In 1932, Franklin D. Roosevelt made a campaign promise to legalize drinking.

The same month he was inaugurated in 1933, he passed the Cullen-Harrison Act, which legalized the sale of beer. By the end of the year, the 21st Amendment had been ratified, ending prohibition.