On this day in 1933, America ended prohibition 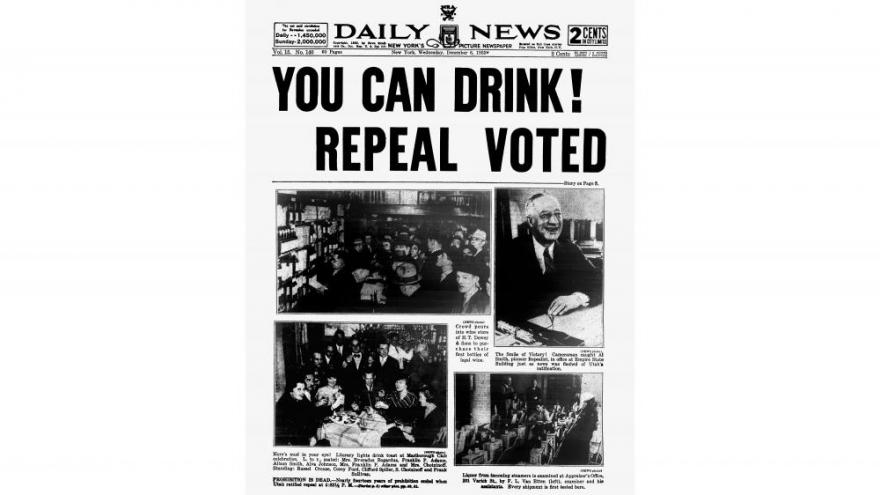 (CNN) -- Pour one out for prohibition. The amendment banning the production, importation, sale and transportation of alcohol in the United States ended on this day in 1933.

Prohibition began on January 17, 1920, when the 18th Amendment went into effect.

The cause was championed by the temperance movement, which encouraged and advocated for abstinence from alcohol. Much of the reasoning was based on ideas of Christian ethics, and many Christian denominations were active in the movement.

Supporters believed increased industrialization and immigration from Europe were leading to heavier drinking, which was accompanied by gambling and prostitution at saloons.

While the amendment outlawed the production of alcohol, it didn't specifically outlaw consumption of it, so people began stockpiling their drinks of choice.

With prohibition in place, crime grew more rampant throughout the 1920s. Bootlegging was widespread and gangsters like Al Capone profited off the illegal distillation and sale of alcohol. Increased gang activity also led to more violence, like the Saint Valentine's Day Massacre in 1929, which saw seven members of George "Bugs" Moran's bootlegging gang shot inside a garage in Chicago.

When the Great Depression hit, potential tax revenue from alcohol sales became appealing to cash-strapped governments. In 1932, Franklin D. Roosevelt made a campaign promise to legalize drinking and the 21st amendment was ratified on December 5, 1933. It overturned the 18th amendment and ended prohibition.

The House of Representatives voted Friday to approve legislation that would legalize marijuana on the federal level and seek to "address the devastating injustices caused by the War on Drugs."

The measure passed the Democratic-controlled chamber largely along party lines, but has little chance of going anywhere in the Republican-controlled Senate.