On Pearl Harbor Day, no survivors or eyewitnesses attended the ceremony 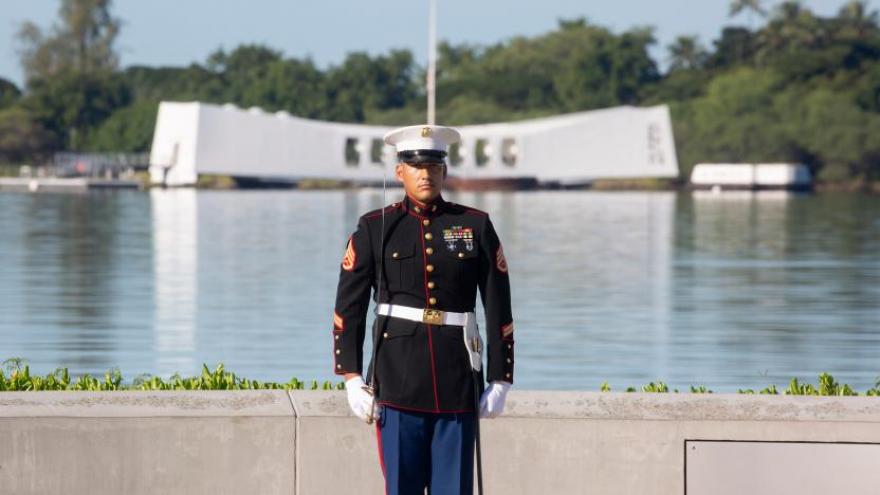 The U.S. Marine Corps gives the rifle salute during the 2019 ceremony at the USS Arizona.

(CNN) -- In what's believed to be a first, no survivors or veterans of World War II attended the annual Pearl Harbor Day event in Hawaii due to the ongoing Covid-19 pandemic.

December 7 is National Pearl Harbor Remembrance Day, commemorating the day when Japanese forces launched a surprise attack on Pearl Harbor in 1941, bringing the US into World War II.

A remembrance at the Pearl Harbor National Memorial in Honolulu takes place every year, typically bringing together Pearl Harbor survivors, WWII veterans and their family members to honor the lives lost during the attack. The event includes music, a Hawaiian blessing and wreath presentations.

But this year, like everything, the 79th anniversary ceremony looked different.

"Out of an overriding concern for the health and well-being of our Pearl Harbor survivors and other World War II veterans, the National Park Service and the Navy chose not to include these heroes in today's commemoration at the Pearl Harbor Historic Sites Visitor Center," said Mike Andrews, deputy public affairs officer for the Navy Region Hawaii, in a statement to CNN.

"To the best of our knowledge, this is the first time that survivors or other veterans have not attended the ceremonies."

Even without the heroes, the hourlong closed remembrance still featured other aspects, opening with "God Bless America" by the Pacific Fleet Band and closing with a rifle salute and aircraft flyover.

Veterans, rather than risking the virus, were encouraged to attend virtually instead, and those attending wore masks.

"The veterans and civilians caught in the crossfire of the opening battle of the Pacific War will always be an inspiration to the fighting men and women of today," said Rear Adm. Robert Chadwick, commander of Navy Region Hawaii, in a statement. "We are inspired by their courage under fire and we look forward to honoring them and remembering their legacy."

The Covid-19 pandemic has continued to worsen in the US, as hospitalizations hit a record high on Sunday. On Monday, Dr. Anthony Fauci, director of the National Institute of Allergy and Infectious Diseases, said that the full impact of Thanksgiving on Covid-19 cases and hospitalizations has yet to be seen, meaning that in the coming weeks numbers could rise even higher.