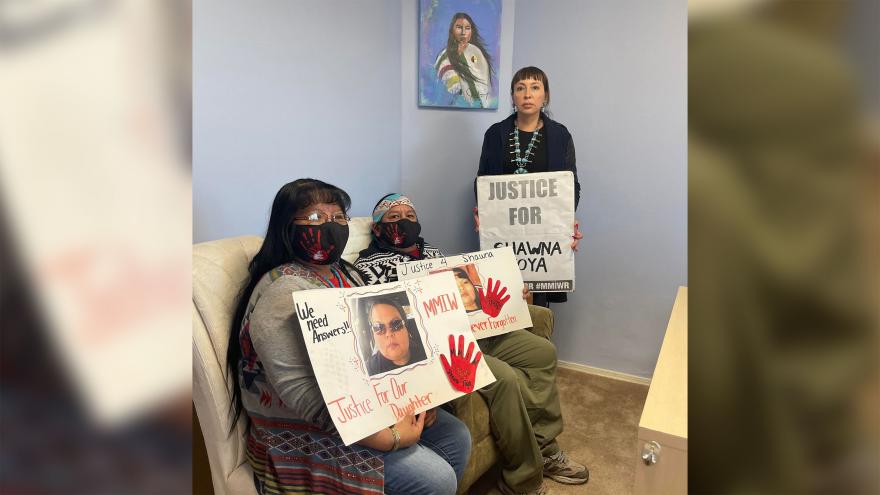 (CNN) -- Shawna Toya was eager to carry on her ancestor's legacy of pottery making in New Mexico when her mother's cellphone rang about 3:45 a.m. and the "worst call" came in last year.

"Oh no, it can't be ... I just talked to her. You have the wrong person," Geraldine Toya recalls telling a police officer. Her 40-year-old daughter Shawna was found dead on July 31, 2021 inside her SUV at a park in Albuquerque. A few hours earlier, the family was celebrating a relative's birthday and they had made back-to-school shopping plans.

The circumstances of Shawna's death are still unknown nearly a year later. But she's among the thousands of missing or murdered Native Americans whose cases have gone unsolved in recent decades. This week, President Joe Biden declared May 5 as Missing or Murdered Indigenous Persons Awareness Day for a second year in a row -- but advocates and families like the Toyas say a solution to the crisis is not in sight.

"I want to know what happened to my daughter," Geraldine Toya, 55, said. "I could feel her sometimes telling me that I have to find out. (That) there's somebody out there that's running free, thinking he or she got away with this."

Nationally, there were 764 unresolved cases of missing Native American people as of March 2022, according to data from the National Missing and Unidentified Persons System. But advocates and experts have said those figures do not reflect the full extent of the issue due to the lack of comprehensive data.

Growing up in Jemez Pueblo, a reservation about 50 miles northwest of Albuquerque, Shawna Toya and her siblings worked with clay every day like many generations before them and learned to paint pottery with the family's signature rain flower pattern, which represents the beauty of life.

Shawna went on to have other jobs and was raising four children, ages 2, 4, 8 and 16 years old, knowing that one day she would take over her family's pottery business.

"She was a really nice and adventurous, outgoing, you know just a fun loving daughter," her mother says.

Gilbert Gallegos, a spokesman for the Albuquerque Police Department, said Shawna's death did not appear suspicious and as a result a violent crimes investigation was not opened.

Geraldine Toya argues that was not the case, saying the family saw her daughter had wounds and bruises when they took her body to the reservation for a traditional burial ceremony.

CNN has reached out to the Office of the Medical Investigator for comment on the cause and manner of death.

Geraldine along with her husband, Benjamin, are raising her daughter's children while demanding justice at protests and meetings with lawmakers.

"I used to go to (pottery) shows, used my hands for my work, I used to do lectures, I used to teach people about our pottery, our designs, talk about our own culture," Toya's mother, Geraldine, told CNN. "Now I'm over here, taking over another job and that's called investigation because they can't do it for me."

On Thursday, activists and Indigenous people are holding events in multiple cities across the United States to raise awareness about the issue and urge officials to keep up the momentum of state and federal initiatives.

In the past year, Biden signed an executive order directing federal agencies to create a strategy to address this "crisis of violence" against Native Americans and a new unit within the Bureau of Indian Affairs has been investigating cases while coordinating resources among federal agencies and Indian country.

Speaking at a virtual event on Thursday, Secretary of Interior Deb Haaland said the issue has long been "swept under the rug" by the federal government "with a lack of urgency, attention, or funding" but the Biden administration has taken it seriously.

Haaland announced that 17 Bureau of Indian Affairs offices have now at least one agent dedicated to these cases and the appointment of members to a commission established by the 2019 Not Invisible Act. The commission's goal is developing recommendations for the federal government to combat violent crimes against Indigenous people.

"The missing and murdered Indigenous peoples crisis is centuries in the making, and it will take a focused effort and time to unravel the many threads that contribute to the alarming rates," Haaland said.

At the state level, Gov. Jay Inslee of Washington state signed a bill in March to create the nation's first alert system for missing Indigenous people and Minnesota created an office dedicated to assist cases of missing and murdered Indigenous relatives. Several other states have created task forces or proposed legislation.

Darlene Gomez, an attorney representing the Toyas who has worked on cases of missing or murdered Indigenous people for the past two decades, says many families have not yet seen the impact of those initiatives. The lack of training for law enforcement officers, an unwillingness to help search for missing persons and complex jurisdiction problems continue hindering efforts to solve cases.

"Oftentimes I believe the policymakers are not out there talking to families, and really getting a clearer understanding of the issues," Gomez said.

"When you're talking policy and you're saying that we're going to encourage agencies to work together on the efforts that really sounds good, but the reality is that if you don't have consultations between each tribe, with the FBI, and each criminal investigator, there's not a whole lot of information sharing and a set criteria for how they will work together," she added.

'This thing is heavy'

Just as the Toyas have dedicated time and money to bring more awareness to the epidemic and their daughter's death, Seraphine Warren has made it her mission to find her aunt.

Warren's aunt, Ella Mae Begay, 62, was reported missing last year on June 15 in Sweetwater, Arizona, one of the most remote areas on Navajo Nation. Warren said her aunt, a master rug weaver, rarely left home and didn't allow anyone inside due to the Covid-19 pandemic.

The Navajo Police Department said the case is being investigated as a homicide but have not provided further details. A spokesperson for the Navajo Nation police did not answer CNN's request for comment. Kevin Smith, a spokesman for the FBI field office in Phoenix said the agency can't comment on the status of investigations.

A total of 5,203 American Indian and Alaska Native girls and women were reported missing last year, data from the National Crime Information Center shows. Of those cases, 624 were reported "active" at the end of the year.

In the weeks and months after Begay vanished, family members constantly walked through remote desert areas and mountains in search for anything that could help find her. At one point, Warren says, seeing the frustration and exhaustion in her relatives' eyes made her realize they could not do it by themselves anymore.

"This thing is heavy. It's not something that somebody could attack alone," Warren said.

That moment sparked a series of prayer walks that have led Warren, an iron worker, to travel more than a 100 miles across the Navajo Nation under the rain, freezing temperatures and fighting pain.

During her first walk, Warren says her "foot was hurting, I didn't have the right shoes to walk. I was feeling blisters and thinking 'I'm not doing this' but I had to tell myself 'just do it, we have to get help."

As Warren became more vocal about her aunt's case and shared her journey on social media, she met other families who like her are looking for answers. They quickly told her that no police department was going to help her and it was normal, Warren recalled.

They were right, Warren says, but it has only fueled her advocacy. Next month, she plans to walk from Begay's home in Arizona to Washington, DC and raise funds to pay for ATVs, gas, and search dogs to find her aunt.

"Missing people are not a wallet, they're not money that you lose. It's not keys. She was a master of rug weaver. She was caring person and she doesn't deserve to just be out there," Warren says.