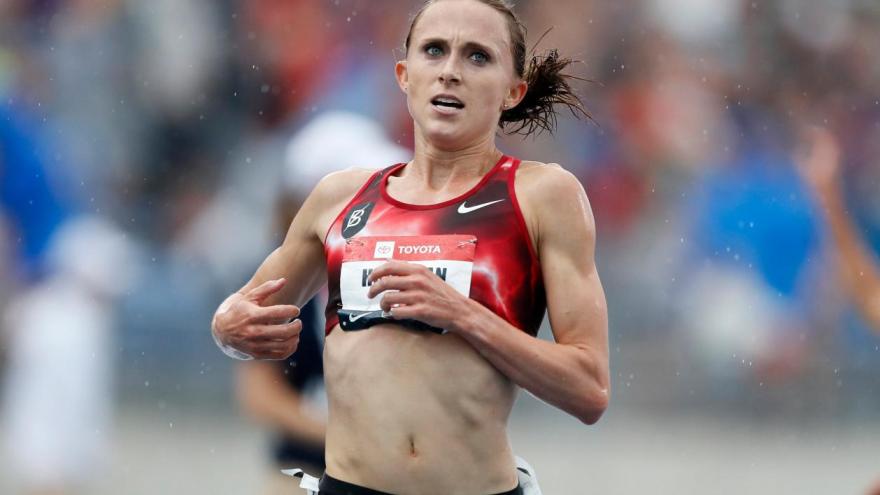 Shelby Houlihan said she was devastated to learn of the suspension from the Athletics Integrity Unit.

(CNN) -- US middle-distance runner Shelby Houlihan, who recently learned she has been banned from the sport of track and field for four years following a positive test for an anabolic steroid, appears less likely to take part in the US Olympic Trials.

At one point on Thursday, it looked like she might be able to race at the event -- at which athletes compete to make the Olympic team -- set to begin Friday in Eugene, Oregon.

"Given there is an active appeal process, USATF will allow any athletes to continue competing until the process is completed," Susan Hazzard, managing director of communications for USA Track and Field, told CNN in an email.

But later Thursday, the US Olympic committee said it would recognize the ban on her participation.

WADA is the World Anti-Doping Agency while CAS is the Court of Arbitration for Sport that upheld the four-year ban on Houlihan earlier this week.

In an Instagram post on Monday, Houlihan said she was devastated to learn of the suspension from the Athletics Integrity Unit (AIU), an independent body that combats doping, after she tested positive for nandrolone stemming from a drug test in December.

Houlihan, a 2016 Olympian and the American record-holder for the 1,500 meters and 5,000 meters, said the positive test stems from eating a burrito about 10 hours before the drug test. She said the burrito contained pig organ meat, or offal, which she said can lead to a positive test for nandrolone.

"When I got that email, I had to read it over about ten times and google what it was that I had just tested positive for," she said in an Instagram post. "I had never even heard of nandrolone."

Nandrolone is a synthetic, anabolic steroid analog of testosterone, according to the National Institutes of Health.

NIH says it can be used for testosterone-replacement therapy to increase nitrogen retention and fat-free muscle mass.

The athlete said that she was devastated to learn of the suspension.

"I feel completely devastated, lost, broken, angry, confused and betrayed by the very sport that I've loved and poured myself into just to see how good I was," Houlihan said in her post. "I want to be very clear. I have never taken any performance enhancing substances. And that includes that of which I am being accused."

A 2015 study funded by the WADA found trace amounts of nandrolone can be found in some meats and warned about the possibility of a false positive.

In a statement to CNN on Thursday, World Athletics, the international governing body for track and field, said, "All Member Federations must respect CAS decisions under the WADA code. We are talking to USATF."

In a statement released on Twitter on Thursday, AIU said it has written to the USATF.

"The AIU clarified that as a Member Federation of World Athletics, USATF must, in the running of its events, respect and implement decisions of hearing bodies such as the Court of Arbitration for Sport (CAS) which are made under the World Athletics Anti-Doping Rules," the statement said.

CNN has reached out to Houlihan's representation to ask about the athlete's next steps in fighting her suspension.