'I have to focus on my mental health,' says Simone Biles after withdrawing from gold medal event 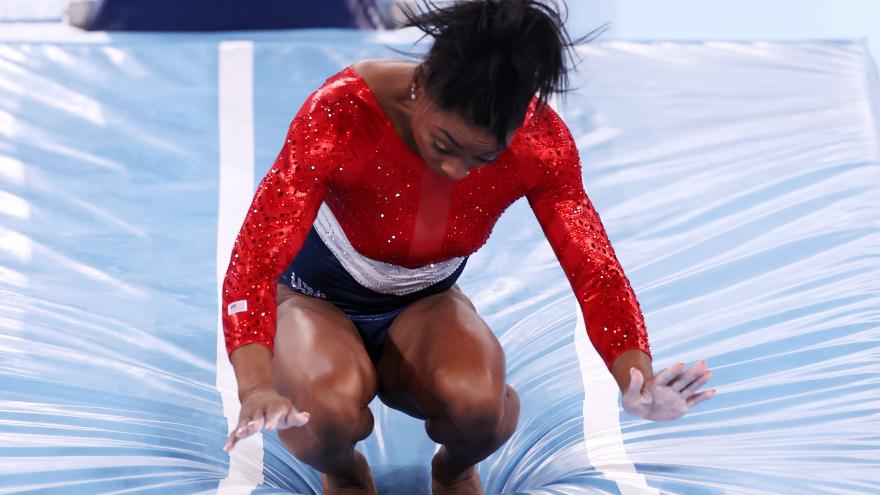 (CNN) -- Simone Biles withdrew from the women's team gymnastics final at the Tokyo 2020 Olympics on Tuesday, citing mental heath concerns as she attempts to protect "her body and mind."

After the final -- won by the the Russia Olympic Committee (ROC) -- Biles broke down in tears as she explained her decision.

"Whenever you get in a high stress situation, you kind of freak out," the 24-year-old told reporters. "I have to focus on my mental health and not jeopardize my health and well-being."

"It just sucks when you're fighting with your own head," she added.

The gymnasts said those competing weren't "just athletes, we're people at the end of the day" and that Team USA is planning to have a "mental rest day" on Wednesday.

Biles' emotional interview put the issue of mental health front and center of the Tokyo 2020 Olympics. Earlier on Tuesday, Naomi Osaka, who has also talked openly about her own mental health struggles, was knocked out of the women's Olympic tennis tournament.

Initially the other Team USA members wanted her to continue competing, according to Biles.

"I was like: I think the girls need to do the rest of the competition without me. They were like 'I promise you'll be fine, we watched you warm-up'. But I said 'no, I know I am going to be fine but I can't risk a medal for the team and I need to call it.

"You usually don't hear me say things like that because I usually persevere and push through things, but not to cost the team a medal. So they were like: OK, if Simone says this, we need to take it pretty serious. I had the correct people around me to do that.

"The impossible is possible" is how gymnast Angelina Melnikova described the ROC's victory, but it was Biles' psychological well-being that dominated the final's aftermath.

Four-time Olympic gold medalist Biles withdrew from the final after leaving the arena to be attended to by the trainer.

While performing her Amanar vault during the first rotation of the team competition, she only managed one-and-a-half rotations and landed awkwardly -- prompting gasps from onlookers in the Ariake Gymnastics Centre.

"It's been a long Olympic journey, it's been a long year ... after the performance that I did, I didn't want to go into the other events, so I thought I would step back," Biles later told reporters.

She added that, as she's gotten older, she's "a little bit more nervous when I do gymnastics," but is "proud" of her team for continuing without her and winning a medal.

Soon after Biles' withdrawal, USA Gymnastics released a statement saying: "Simone Biles has withdrawn from the team final competition due to a medical issue. She will be assessed daily to determine medical clearance for future competitions. Thinking of you, Simone!"

Biles returned to the arena before the second rotation in a tracksuit as Jordan Chiles took her place for the uneven bars.

She continued to support her teammates from the sidelines, chatting with them and cheering after each routine.

Chiles, a close friend of Biles, was appearing in her first Olympics and competed alongside Sunisa Lee and Grace McCallum.

USA had closed the gap on ROC to 0.8 ahead of the final rotation, but any chance of a comeback victory was effectively out of reach when Listunova scored 14.166 for her superb floor routine, growing the ROC's lead to more than three points.

Melnikova then scored 13.966 to seal the win and spark emotional celebrations with her teammates.

"I knew that it was depending on me, and I was feeling overwhelming happiness and I knew I did it. I knew I had done my job," Melnikova said of her final routine.

"We still can't believe it's happening. The impossible is possible now ... We worked extremely hard, we were basically in a closed training camp for a year and a half, working for this moment."

With the women's all-around final on Thursday, Biles said she would "take it a day at a time."

"Today has been really stressful," she added. "We had a workout this morning. It went okay, and then just that five-and-a-half hour wait or something, I was just shaking, could barely nap.

"I'd just never felt like this going into a competition before and I tried to go out there and have fun ... but once I came out here, I was like: no, the mental's not there, so I just need to let the girls do it and focus on myself."