Oklahoma state House passes ban on abortion, to be enforced through civil action 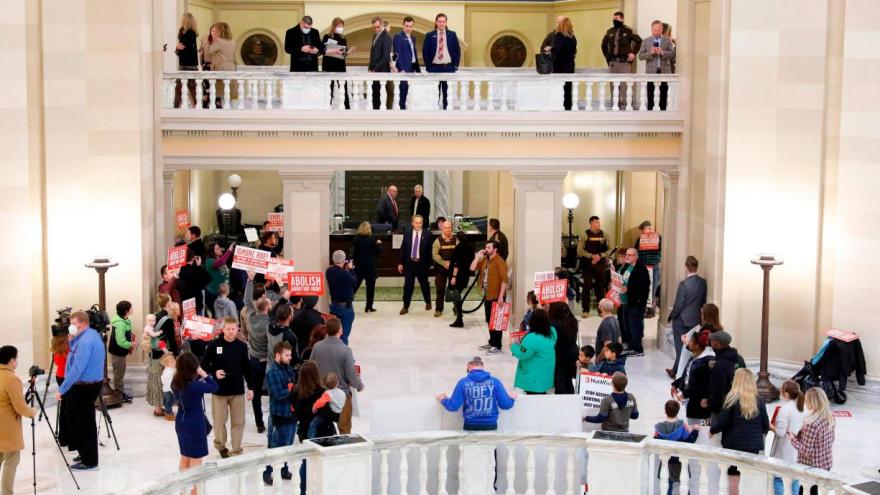 The Republican-controlled Oklahoma House of Representatives on March 23 passed a bill that would lead to a near-total ban on abortion and would allow private citizens to enforce the law through civil litigation.

(CNN) -- The Republican-controlled Oklahoma House of Representatives on Tuesday passed a bill that would ​ban most abortions at any point in a pregnancy and would allow private citizens to enforce the law through civil litigation.

The bill would go further than a Texas law it's modeled after that bans abortion after six weeks of pregnancy and also allows enforcement through private civil lawsuits. Under the Oklahoma bill, the ban would start immediately after conception if the abortion didn't meet an exception.

The Oklahoma proposal, House Bill 4327, would provide exceptions "to save the life of a pregnant woman in a medical emergency" or if the pregnancy was the "result of rape, sexual assault, or incest that has been reported to law enforcement."

Like Texas Senate Bill 8, the Oklahoma legislation would allow virtually any private individual to sue a person believed to have violated the law and be awarded at least $10,000 in damages.

It would affect not only abortion providers but also anyone who "aids or abets the performance or inducement of an abortion" or even simply "intends to engage in the conduct described by this act." The legislation would not, however, allow civil action against the person who was pregnant, or who was seeking abortion services.

"This act shall be enforced exclusively through private civil actions," the bill reads.

Under the Oklahoma bill, a lawsuit could be successful even for an abortion performed during a period when enforcement of the law was suspended because of a court challenge.

"This is a dark moment for Oklahomans and their ability to control their own bodies and futures and will have ripple effects throughout the region," Jessica Arons, senior policy counsel for the American Civil Liberties Union, said in a statement Tuesday. "After seeing the devastation caused by Texas' draconian abortion ban, Oklahoma politicians have taken the unconscionable step of imposing an even harsher ban on pregnant people seeking this essential health care."

Planned Parenthood said that the bill is a "grave threat" to abortion access not only in Oklahoma, but across the region.

After Texas's abortion law went into effect, Planned Parenthood clinics in neighboring Oklahoma saw some of the biggest surges in Texas abortion-seekers, according to the organization. Between September 1 and December 31, 2021, abortion patients with Texas ZIP codes made up more than half the total number of patients at Oklahoma Planned Parenthood clinics, in what was a 2,500% increase in Texas traffic to those facilities.

"People who need abortion will be forced to flee their home state, attempt to end their pregnancies without medical support, and face state-created bounty hunters here at home. As we've seen during the crisis in Texas, bans do not eliminate the need for abortion," Emily Wales, the interim president and CEO of Planned Parenthood Great Plains Votes, said in a statement.

The Republican-sponsored Oklahoma House bill was approved by a near party-line vote of 78-19. The language of the bill was drafted by former Texas Solicitor General Jonathan Mitchell to closely mirror the Texas bill, according to the Oklahoma bill's sponsor, GOP state Rep. Wendi Stearman. Mitchell also was the architect of the Texas abortion ban.

Stearman, who has said she wants abortion to be outlawed in Oklahoma, said her legislation "would protect the life of the unborn."

The Oklahoma bill now heads to the state Senate for consideration. The Oklahoma Senate, where Republicans also have a majority, has passed several bills restricting access to abortion, including a "heartbeat" bill and legislation that would ban abortions 30 days after a pregnant woman's last menstrual period.

The Idaho Legislature earlier this month also passed a bill fashioned after Texas' law. The Idaho bill, which was sent to the governor's desk, would ban abortions after six weeks and allow the family of the fetus to bring legal action against the medical professional who performed the abortion.

This story has been updated with additional details to reflect the final bill version. An earlier version of the legislation made available on the website of the Oklahoma legislature listed one exception to the abortion ban: "to save the life of a pregnant woman in a medical emergency." A subsequent final version of the legislation uploaded to the Oklahoma legislature website includes a further exception for when the pregnancy "is the result of rape, sexual assault, or incest that has been reported to law enforcement."