Oklahoma officer given a Starbucks order with the word 'PIG' written on the label, police chief says 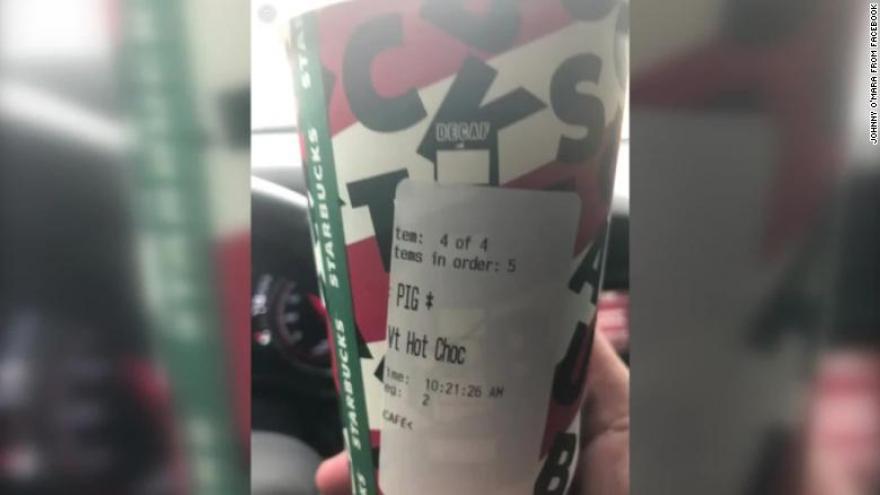 A police chief in Oklahoma said one of his officers picked up a coffee order from a local Starbucks on Thanksgiving with the word "PIG" printed on the label.

(CNN) -- A police chief in Oklahoma said one of his officers picked up a coffee order from a local Starbucks on Thanksgiving with the word "PIG" printed on the label.

The Kiefer police officer went to the Starbucks to get coffee for dispatchers who were working on Thanksgiving with him when he encountered the label, Chief Johnny O'Mara said Thursday in a Facebook post. Starbucks has apologized to the officer and suspended a barista pending an investigation, a company spokesman said on Thursday.

O'Mara posted a picture of a cup with the "PIG" label on Facebook.

"What irks me is the absolute and total disrespect for a police officer who, instead of being home with family and enjoying a meal and a football game, is patrolling his little town," O'Mara wrote in his Facebook post.

Kiefer has a population of fewer than 1,700 people, according to Census figures. It is located southwest of Tulsa.

O'Mara wrote: "This cup of coffee for a 'pig' is just another little flag."

"It's another tiny symptom and a nearly indiscernible shout from a contemptuous, roaring and riotous segment of a misanthropic society that vilifies those who stand for what's right and glorifies the very people who would usher in the destruction of the social fabric," O'Mara wrote.

O'Mara couldn't be reached on Thursday.

The officer went to the Starbucks in Glenpool to pick up five drinks, CNN affiliate KTUL reported. O'Mara told KTUL a customer pointed out the label on the cups to the officer.

The station said the word was printed on all the cups.

O'Mara wrote he called the store and "was told they'd be happy to 'replace the coffee with a correct label,'" the Facebook post said.

"That's really gut wrenching, especially knowing that these cups were going to dispatchers," O'Mara told the station. "These people are there waiting for 911 calls to come in."

"We are deeply sorry to the law enforcement officer who experienced this. We have also apologized directly to him and we are working to connect with the police chief as well as to express our remorse," Mendes said, reading a statement over the phone.

"This language is offensive to all law enforcement and is not representative of the deep appreciation we have for police officers who work tirelessly to keep our communities safe," the statement said.