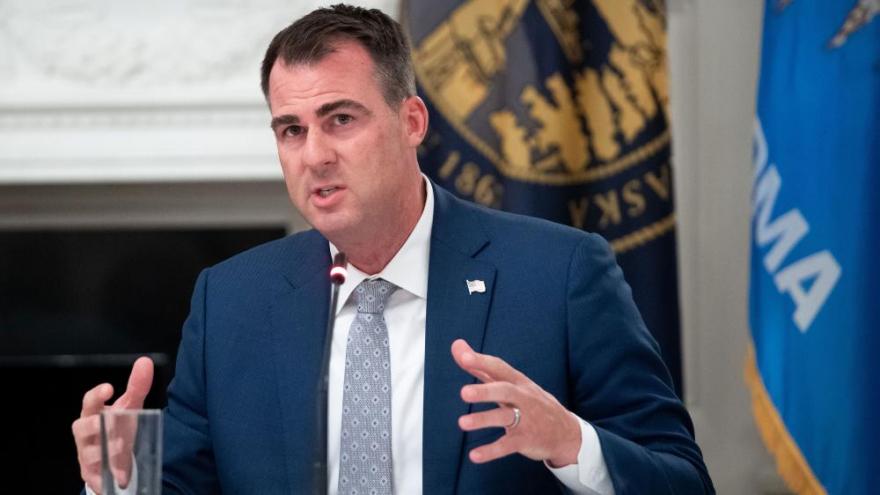 Republican Oklahoma Gov. Kevin Stitt is set to sign a near-total ban on abortion into law on April 12.

(CNN) -- Oklahoma Republican Gov. Kevin Stitt on Tuesday signed a bill into law that makes performing an abortion illegal in the state, with an exception only in the case of a medical emergency.

Senate Bill 612, which cleared the state Senate last year and the House earlier this month, makes performing an abortion or attempting to perform one a felony punishable by a maximum fine of $100,000 or a maximum of 10 years in state prison, or both. The law does not provide exceptions in cases of rape and incest.

Under the measure, the woman would not be criminally charged or convicted for the death of her "unborn child." The legislation does not prohibit the use, sale, prescription or administration of contraceptives.

The governor was joined at the signing by members of the Oklahoma legislature, faith leaders from across the state, as well as representatives from anti-abortion advocacy groups.

Oklahoma Republican state Rep. Jim Olsen, SB 612's principal House author, previously told CNN that he believes "rape and incest is a horrible crime" and though the baby is conceived in a "horrible situation" that it "still has a right to life." "The baby should not be liable for the sins of the father," he said. "It's still a life."

White House press secretary Jen Psaki condemned the law, calling it "one of the most extreme state laws signed into law to date." In her statement Tuesday, Psaki also urged Congress to pass the Woman's Health Protection Act, which would codify Roe v. Wade, after the legislation failed to overcome Senate hurdles in February, with Democratic Sen. Joe Manchin of West Virginia joining Republicans to block its passage.

"Make no mistake: the actions today in Oklahoma are a part of disturbing national trend attacking women's rights and the Biden Administration will continue to stand with women in Oklahoma and across the country in the fight to defend their freedom to make their own choices about their futures," she said.

Stitt's signature on the legislation made Oklahoma the latest Republican-led state to approve new restrictions on abortion access in recent weeks. Last month, Arizona Republican Gov. Doug Ducey signed into law a ban on most abortions in the state after 15 weeks, similar to a Mississippi law that's before the US Supreme Court, and South Dakota Republican Gov. Kristi Noem has signed legislation that further restricts access to medication abortions in the state.

In Idaho, the state Supreme Court temporarily blocked legislation recently signed by Republican Gov. Brad Little that was modeled after Texas' law that bans abortions after about six weeks. Idaho had become the first state to follow the controversial Texas statute that allows private citizens to enforce the restrictions with lawsuits.

The bill had been decried by abortion rights proponents throughout the legislative process, including the Planned Parenthood Action Fund, which said last week that the law "would be devastating" for Oklahomans and also Texans, who make up nearly half of the patients who seek abortion care in Oklahoma.

"We will fight back against these cruel bans in court because people shouldn't have to cross state lines in secret to access care that should be available in their communities," Emily Wales, interim president and CEO of Planned Parenthood Great Plains Votes, said in a statement released following the signing.

The Oklahoma state Senate is also considering legislation, House Bill 4327, modeled after the controversial Texas law. That bill would ​ban most abortions at any point in pregnancy and allow private citizens to enforce the law through civil litigation.

This headline and story have been updated with additional developments Tuesday.