OK, but seriously, what really goes on inside Area 51? 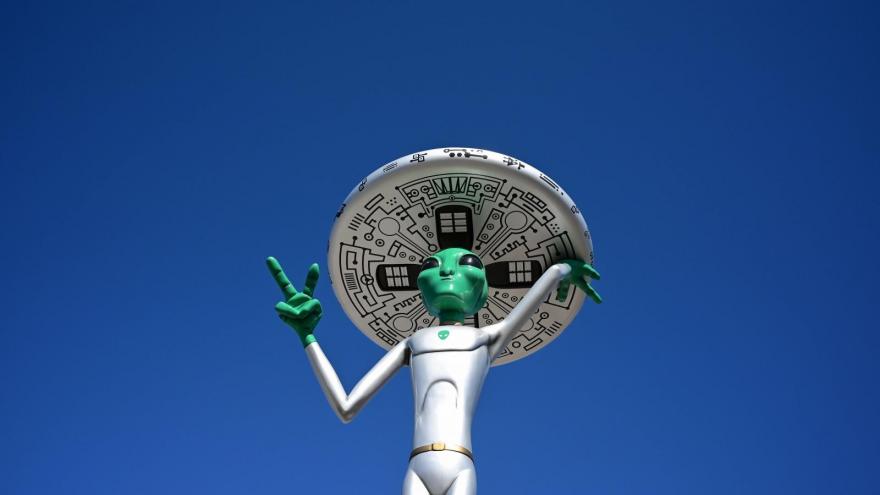 This weekend, a bunch of people showed up in the desert to follow through on their Facebook pledge to storm Area 51 and "see them aliens."

(CNN) -- So apparently a bunch of people showed up in the Nevada desert this weekend to follow through on their Facebook pledge to storm Area 51 and "see them aliens." And it wasn't nearly as exciting as some had hoped.

OK, but really. What goes on at Area 51? If people had actually gotten inside -- which, to be clear, was ill-advised -- what would they have found?

There's a lot that we don't know about the Area 51 (thus, the conspiracy theories). But here's what we do know.

It's a test facility for the US Air Force ... officially

Area 51 is a classified US Air Force facility in the Nevada Test and Training Range, a massive government facility outside Las Vegas.

It was originally used by the CIA as a site to develop and test the U-2 reconnaissance plane, which was meant to spy on the Soviet Union, said Annie Jacobsen, a journalist and the author of the book "Area 51: An Uncensored History of America's Top Secret Military Base."

With the ability to fly at 70,000 feet, the U-2 "was commonly mistaken for a UFO by civilians on the ground, who couldn't imagine how anything could be flying that high," Jacobsen said.

Management of the facility was turned over to the US Air Force in the late 1970s. But the government didn't publicly acknowledge its existence until 2013, when the CIA published declassified documents confirming it was used as a test facility for the U-2 and A-12 OXCART aerial surveillance programs.

According to those documents, the cloak of secrecy surrounding Area 51 was to keep information from the Soviet Union -- not to cover up evidence extraterrestrial life.

President Barack Obama became the first US president to mention Area 51, at the Annual Kennedy Center Honors later that year.

"Until then," Jacobsen said, "it was officially a state secret."

It's ripe for conspiracy theories

By the time the US government finally acknowledged Area 51, it had been used for decades as fodder for conspiracy theorists.

"Area 51 is among the most mysterious, most secretive bases," Jacobsen told CNN, "which only adds to the public fascination and lore with it."

Perhaps the most widely known conspiracy theory was that Area 51 housed an alien spacecraft that allegedly crashed in Roswell, New Mexico, in 1947, along with the bodies of the pilots.

The supposed UFO was actually smashed parts of balloons, sensors and radar reflectors from the wreckage of a classified government project meant to "determine the state of Soviet nuclear weapons research," according to a 1994 Air Force report.

But Area 51 didn't really enter the public conscience until 1989. That's when a man named Bob Lazar claimed in an interview with a local news station that he had worked at Area 51 to reverse engineer what he said was a downed alien spacecraft.

Lazar's interview and the claims he made "unveiled this secret base with a big splash," Jacobsen said. "And since then, the lore and mythology and myth has only grown around Area 51."

So what would we find there?

According to Jacobsen, the US does work to reverse engineer technology at Area 51.

Today, she said, foreign technology captured on battlefields overseas is brought to Area 51 to be reverse engineered and tested.

"So if we want to learn about a radar system, for example, that goes to Area 51 and we fly our own aircraft against it," she said, "to try and determine the secrets of our enemies."

Asked about this assertion, the US Air Force told CNN, in part, "For operational security reasons we do not provide detailed information regarding what type of operations take place in specific areas of the (Nevada Test and Training Range)."

As for what people might find if they actually stormed Area 51, Jacobsen wouldn't speculate, saying that's "what drives conspiracy thinking."

But the facility is "the birthplace of what's called ISR -- intelligence, surveillance and reconnaissance," she said.

"So to think that the federal government doesn't have a clear idea of who is there, when they got there, and where they are right now, is extremely naive," she said. "There is no way anyone is going to get anywhere near the classified facility."

Ultimately, it's almost impossible to imagine what the government could be working on behind Area 51's walls, she said.

"The job of the military intelligence community is to create weapons systems and surveillance platforms that no one can think of," she said. "They wouldn't be doing their job if we could imagine properly what it was they were doing."

But what about the aliens?

"The idea that the public believes unidentified flying aircraft -- or as the Navy recently said, unidentified aerial phenomena -- are from outer space, helps keep cover on the true facts of their secret programs," she said.

"What those true facts are remains to be known."