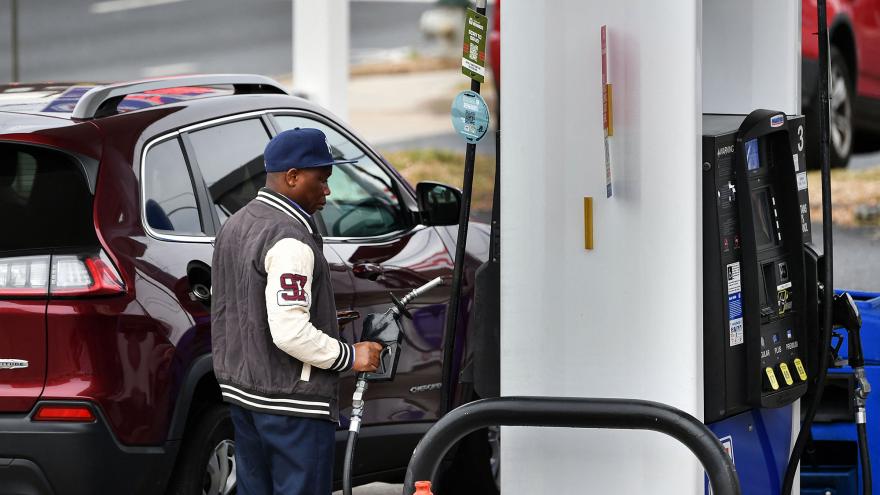 (CNN) -- Gas prices were rising rapidly even before Russia's invasion of Ukraine,but with the current shock to the oil market, $4 a gallon gas is now likely to be widespread across the country in a matter of weeks — if not sooner.

The average price of a gallon of regular stood at $3.54 nationwide Thursday, according to figures AAA collected from US gas stations. But wholesale gasoline prices soared 14 cents a gallon, or 5%, in trading Thursday, pushing oil futures above $100 a barrel for the benchmark Brent crude for the first time since 2014.

The jump in wholesale gas prices will likely be passed on to consumers at the pump within days, said Tom Kloza, global head of energy analysis for the Oil Price Information Service, the firm that tracks gas data for AAA.

"Every single distributor and retailer will look to get filled up today," he said Thursday morning. "They'll be paying $3 for wholesale gas, but they're worried about paying $4 a gallon next time."

Klozabelieves the national average will likely reach $4 a gallon by mid-March. That would be the first time gas hits a level that high since the summer of 2008, when prices reached a record average of $4.11 a gallon. Kloza expects that record to fall sometime between mid-April and Memorial Day.

Some areas are already paying at or near $4 a gallon. On Thursday, Oregon joined California and Hawaii with a statewide average at that mark. Nevada was at $4 on Friday, and Washington state hit that in the Saturday reading. California leads the nation with a $4.81 per gallon average on Saturday.

It's not that Russian oil or gasoline make up a major portion of US supplies, Kloza said. "Brent is a world market price. It's going to be the most important number out there for a while," he said.

The latest data from November showed that Russia contributed less than 4% of US demand, but Europe uses a lot of Russian oil and gasoline.

Although sanctions have yet to take effect, Russian crude was trading below global prices Wednesday — but finding no buyers, Kloza said. "The mulitnationals realize that Russia is on its way to being a full-fledged trading pariah," he added.

The war in Ukraine is only one reason that US gas prices are headed to record levels. Strong demand for gas, which was rising along with the retreat of the Omicron surge in Covid cases, is outpacing supplies for a number of reasons.

Several major refineries are offline after recent damage, including a Texas facility that was damaged by fire just before Christmas, and two Louisiana refineries that still aren't operational after being hit by Hurricane Ida last August. On the West Coast, gas prices were already near or above $4 because a number of refineries have closed or been converted to process renewable fuels in recent years, trimming the region's refining capacity by more than 20% from pre-pandemic levels.

So even without the current crisis, the national average gas price was likely to hit $4 a gallon given the current levels, according to RBC.

"Prices typically increase by around 45 cents per gallon between mid-February and the beginning of June, on a seasonal basis," the investment bank said in a note to clients. "Given the current fundamental framework, not many investors deem $4 a gallon as an aggressive scenario."

Some parts of the country with relatively low current gas prices might be able to avoid $4 averages, Kloza noted. Texas, Oklahoma, Arkansas, Kansas, Missouri, Kentucky and Mississippi all had average prices Thursday of $3.25 or lower. And some states may temporarily eliminate their gas taxes to give drivers some relief.

Few price spikes generate more pubic backlash than those at the gas pump, and politicians are afraid to pay the price for those spikes. "Gasoline is a third rail of American politics," Kloza said.