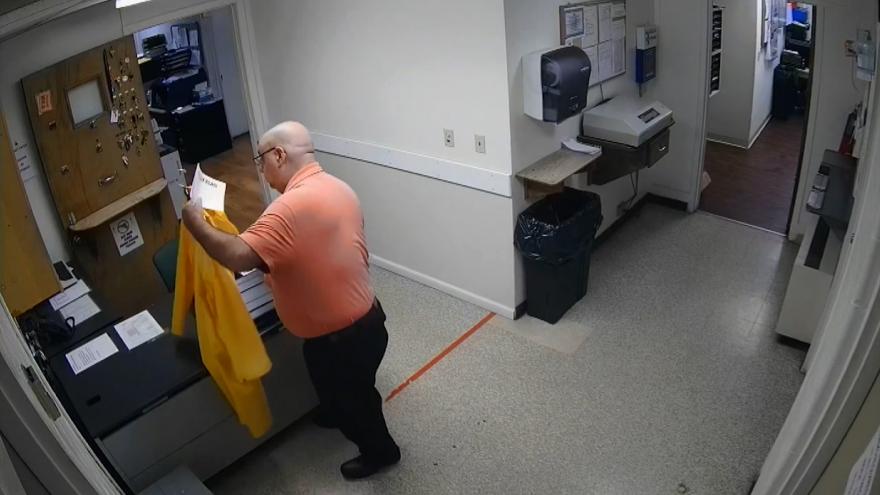 (CNN) -- An Ohio police chief has retired from his post after an apparent racist incident was caught on surveillance, CNN affiliates report.

Sheffield Lake Police Chief Anthony Campo has now left the force after more than 30 years on the job following what appears to be a racist prank on a fellow Black officer in the police station, an incident captured on surveillance video.

Video obtained by CNN from the City of Sheffield Lake shows Campo arranging a yellow raincoat on a desk with a hood clearly visible; then he places a white piece of paper on the jacket, with the words "Ku Klux Klan" covering the police label on the back of the jacket.

A Black officer CNN is not naming enters the room soon after.

The video was provided to CNN without sound so it is unclear what words are exchanged.

Sheffield Lake Mayor Dennis Bring says that while the Black officer in the video appeared to be laughing, it was because he was uncomfortable, according to WOIO.

"We had a very emotional sit down because -- it took us 10 minutes to talk to each other because we were both crying," Bring tells the affiliate.

The mayor says the chief has not been apologetic, saying it was a joke.

The mayor, though, says he took the incident very seriously and asked for the police chief's badge and office keys. The chief then asked to type up a letter of resignation and retire, the mayor said, according to CNN affiliates.

CNN has made several attempts to reach Campo who also told CNN affiliate WEWS in part, "It was just a joke that got out of hand."

The city law director has not responded to requests for comment from CNN.