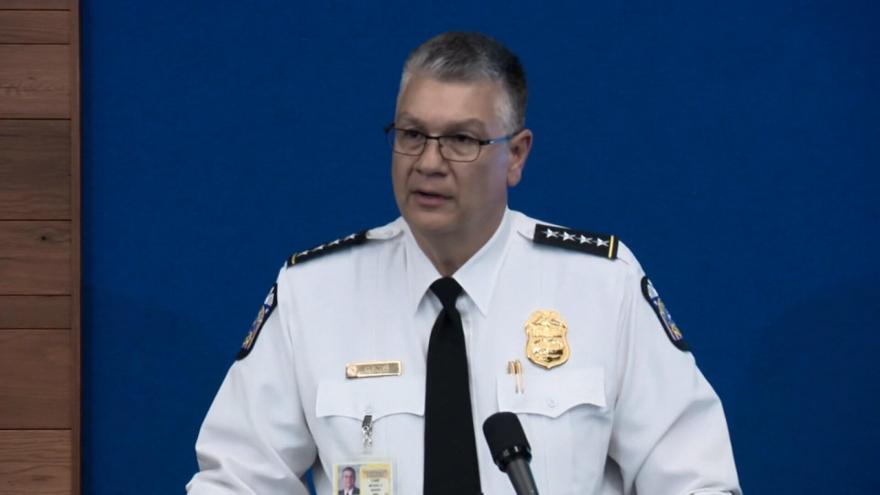 Officials in Columbus, Ohio, just wrapped a press conference on the fatal police shooting of a Black teenager on April 20.

"We don't yet have all of the facts but we do know that a 16-year-old girl, a child of this community, tragically died last night," Columbus Mayor Andrew Ginther told reporters.

"Bottom line: Did Ma'Khia Bryant need to die yesterday?" he added. "How did we get here? This is a failure on the part of our community. Some are guilty but all of us are responsible."

Ginther said state investigators will determine "if the officer involved was wrong, and if he was we will hold him accountable."

Police identified the officer who fired the shots as Nicholas Reardon, who was hired in December 2019. The officer is off street duty pending an investigation. Calls seeking comment from the police union have not been returned.

The fatal shooting comes at a time when police use of force around the nation -- and in Columbus specifically -- is under new scrutiny. In February, former Columbus police officer Adam Coy was indicted on charges related to the fatal shooting of Andre Hill, a 47-year-old Black man.

Hundreds gathered in different sections of Columbus throughout the day as they headed toward police headquarters.

The girl's mother, Paula Bryant, and the Franklin County Children Services had identified the teen as Ma'Khia Bryant.

In a series of clips from police body camera video, the girl is seen holding a knife during a tussle with another young woman. An officer arrived at the scene and opened fire when the girl appeared to attempt to stab a second woman.

Ma'Khia fell to the ground, the knife by her side.

"She came at her with a knife," the officer who fired his weapon is heard saying.

The situation unfolded rapidly, according to clips from the body cameras of three officers on the street. Ma'Khia was holding a knife in her right hand and charged a woman dressed in pink -- who turned to her side as the teen appeared to attempt to stab her. That's when the shots rang out.

In the video, one officer is heard asking, "Where is she hit?" The officer starts lifesaving measures. "Stay with us," he tells the girl, asking bystanders her name.

"Stay with us, Ma'Khia," he implored.

Officials asked the community to wait for all the facts to come out.

If an officer is "faced with someone employing deadly force, deadly force can be the response," Woods told reporters.

Asked about the policy on the use of Tasers versus handguns, Woods declined to comment on the specific incident but said: "If there's not deadly force being perpetrated on someone else at that time, an officer may have the opportunity to have cover distance and time to use a Taser."

"But if those things are not present, and there's an active assault going on in which someone could lose their life, the officer can use their firearm to protect that third person," he added.

Ginther said the Bureau of Criminal Investigation will look into actions of the officer.

"I understand the outrage and the emotion about this incident," Department of Public Safety Ned Pettus Jr. said at a news conference. "The video shows there is more to this. It requires us to pause."

Republican Gov. Mike DeWine called the fatal police shooting of Ma'Khia a "horrible tragedy" and praised Ginther's transparency in releasing the videos of the incident.

"You cannot get over the fact that you have a teenager who's dead and that's a horrible, horrible tragedy," DeWine said at a briefing. "We have to look at the facts."

DeWine added, "We should have enough compassion to worry about every child who is shot in our cities. And we should not accept it."

Ginther told reporters on Tuesday that "based on this footage, the officer took action to protect another young girl in our community ... But a family is grieving tonight..."

"We have a duty to protect the public and ourselves, certainly, the public," Keith Ferrell, president of the Capitol City Lodge number 9 police union, said in a video on CNN affiliate WSYX.

"These are the kind of decisions officers are forced to make every day, and with this transparency, the public can see that. As unfortunate as it is, we do not know potentially how many lives could have been lost in addition or people seriously injured."

The shooting happened about 30 minutes before the verdict was delivered in the killing of George Floyd. A jury found former Minneapolis police officer Derek Chauvin guilty of all three charges against him.

"As we breathed a collective sigh of relief today, a community in Columbus felt the sting of another police shooting," Floyd family attorney Ben Crump tweeted.

In Tuesday's shooting, police received a call at 4:32 p.m. indicating "females were there trying to stab them and put their hands on them," Columbus Interim Police Chief Michael Woods said.

When police arrived, the first officer on the scene approaches a group in the driveway of a home, according to that officer's bodycam footage.

The video shows a teen quickly move toward another girl with what appears to be a knife, and the girl falls to the ground. The officer yells, "Hey, hey, hey, hey. Get down!" before she appears to lunge at a second girl with the knife, according to the video.

One officer attends to the shooting victim. Officers assessed the girl for injuries and summoned a medic, as is protocol, Woods said.

"Ma'Khia had a motherly nature about her. She promoted peace. That is something that I want to always be remembered," Bryant, the girl's mother, told TV station WBNS.

A neighbor says video showed teen 'was the aggressor'

A neighbor of Ma'Khia Bryant told "New Day" that video of Ma'Khia's death demonstrated that the teen "was the aggressor."

"I can certainly see why the police officer chose to stop her. Now, whether or not less lethal force could have been used, whether or not a Taser could have been chosen instead of a gun -- I don't know," Ira Graham III told CNN's John Berman. "But I do know that with Ma'Khia having that lethal weapon in her hand, she did need to be stopped."

Police did not have any information on whether the two other individuals were injured, Woods said.

The officer will be off the street while an investigation by the Bureau of Criminal Investigation (BCI) in the Ohio Attorney General's Office takes place, Woods said. The investigation then goes to the Franklin County grand jury and then back to the police department for an internal review, Woods said.

On Tuesday night, Columbus City Council President Shannon Hardin spoke of Ma'Khia's death during a committee meeting to vet nominees for a new civilian review board that will oversee the city's police force. He noted the collective "sigh of relief" that came with the Chauvin trial verdict in Minneapolis, but added "there is a truth that for so many in our community there's no relief."