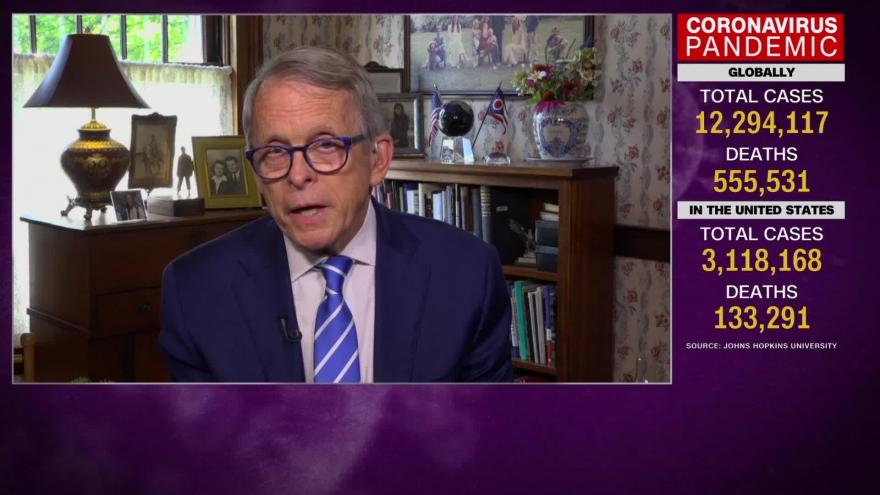 Ohio Gov. Mike DeWine announced that he has tested positive for coronavirus.

The initial announcement came shortly before DeWine, a Republican, was scheduled to meet with President Donald Trump in Cleveland.

DeWine was tested as part of the "standard protocol" to greet Trump on the tarmac at Burke Lakefront Airport, the governor's office said in a statement. He returned to Columbus, where he and his wife Fran were both to be tested.

"A PCR test was administered to the Governor and members of his staff this afternoon. The PCR test looks for the specific RNA for the SARS CoV-2 -- in other words, the genetic material specific for the virus that causes COVID-19," the announcement stated. "The PCR test is known to be extremely sensitive, as well as specific, for the virus. The PCR tests for the Governor, First Lady, and staff were run twice. They came back negative the first time and came back negative when they were run on a second diagnostic platform."

DeWine tweeted Thursday that he's not experiencing symptoms at this time.

"As part of the standard protocol to greet President Trump on the tarmac in Cleveland, I took a COVID test. I tested positive. I have no symptoms at this time. I'm following protocol and will quarantine at home for the next 14 days," he wrote.

Landing in Cleveland shortly after the news broke, Trump wished DeWine well in light of his diagnosis and told the crowd gathered at the airport that DeWine is a "great guy" who has "done a fantastic job."

"We want to wish him the best, he'll be fine," Trump said.

DeWine was the latest politician to test positive for coronavirus shortly before they were scheduled to meet with Trump. Last week, GOP Rep. Louie Gohmert, who has frequently refused to wear a mask, tested positive for the virus shortly before he was scheduled to fly aboard Air Force One with Trump to Texas. He is the second known governor to test positive for coronavirus, after Oklahoma Gov. Kevin Stitt announced in July he had contracted Covid-19.

DeWine's diagnosis is particularly notable as he has taken aggressive measures to slow the spread of coronavirus in his state, including issuing a stay-at-home order, a mask mandate, closing schools and postponing the state primary. His warnings about the seriousness of the pandemic early on and following the advice of health experts have differed from Trump's repeated downplaying of the virus and propensity to contradict the doctors on his coronavirus task force. DeWine has also taken a slower approach than other Republican governors in reopening his state.

The Ohio Democratic Party said it is saddened to hear about DeWine's positive coronavirus test result and offered support for the governor.

"We know how hard he's been working to keep Ohioans safe, and this is just one more reminder that this virus can impact everyone," the party's chairman David Pepper said in a statement. "As fellow Ohioans, we stand with and support our governor and his family at this time."

This story has been updated with additional background information and reaction.