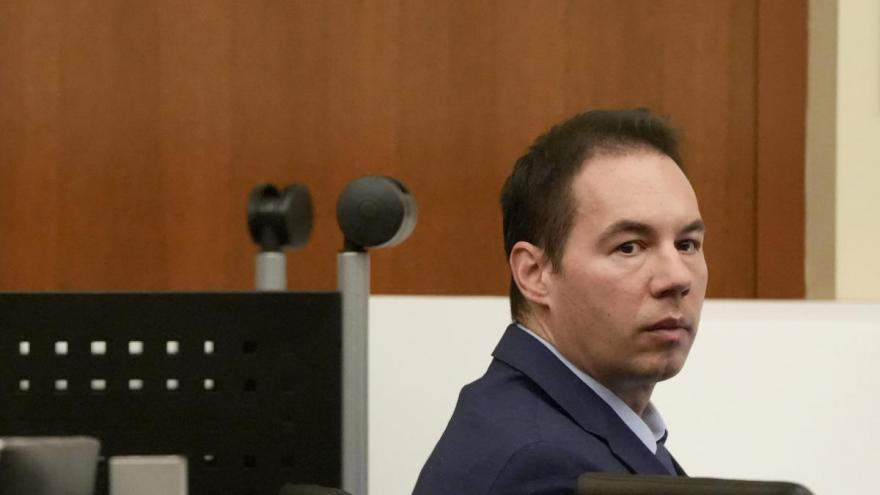 An Ohio jury has reached a verdict Wednesday in the murder trial of William Husel, the doctor accused of overprescribing fentanyl to his critically ill patients.

(CNN) -- The Ohio doctor accused of overprescribing fentanyl to his critically ill patients and hastening their deaths was found not guilty of 14 counts of murder on Wednesday.

William Husel and his attorney embraced at the defense table after the 14th and final not guilty verdict was read in court. He was subsequently discharged from the courtroom.

The decision comes just over a week after jurors began deliberating and days after they said they were at an impasse and could not reach a unanimous verdict, leading Franklin County Judge Michael Holbrook to instruct them to continue their deliberations.

After the verdict, Franklin County Ohio prosecutor Gary Tyack praised both sides of the case.

"The State of Ohio v. William Husel was carefully tried and prepared by both the Prosecution and the Defense," he said. "The Jury after review of all the evidence was not convinced beyond a reasonable doubt that William Husel was guilty of any charges submitted to them. We accept the jury verdict."

Defense attorney Jose Baez celebrated the acquittal and criticized the investigation that led to charges. In a Zoom call with reporters, he said Husel hopes to eventually practice medicine again.

"I can tell you he's incredibly happy and grateful. He wants this time right now to spend with his family," Baez said. "They're incredibly relieved that this nightmare is finally over."

Husel faced 14 counts of murder as prosecutors said he purposely administered excessive doses of fentanyl that caused or sped up the deaths of patients in the intensive care unit from 2015 to 2018. All of the counts also included the lesser charge of attempted murder.

"If you hasten a person's death, even if their death is as sure as the sun is going to rise in the morning, if you hasten that along, you have caused their death under the eyes of the law," Franklin County prosecutor David Zeyen said in closing arguments.

Baez argued prosecutors had not proven beyond a reasonable doubt that the doses actually hastened the patients' deaths or that Husel purposely intended to kill the patients.

The trial began in February, with over 50 witnesses testifying for the prosecution, including doctors, nurses and administrative employees of Mount Carmel Hospital West, where Husel worked as the night ICU physician.

Family members detailed the stories of their loved ones declining quickly once at the hospital, as well as their experiences with Husel and the ICU. Experts also told the court the large fentanyl doses Husel gave to patients caused their deaths and were intended to accelerate the dying process.

Despite the accusations, Husel's former colleagues testified that he was a wonderful doctor who was hardworking, fought to save people's lives, was helpful to everyone in the ICU unit and was always there to teach and explain.

Husel's defense called just one witness, Dr. Joel Zivot, who studied the medical records of the 14 patients and determined they had severe and unrecoverable illnesses. Zivot also testified that recovery to a normal state of health was not possible for the patients, and he determined underlying medical issues caused their deaths.

Husel did not take the stand. His medical license is currently suspended, defense counsel confirmed to CNN.

The trial comes almost three years after Husel, 46, was indicted on 25 counts of murder, though 11 of those counts were dismissed pretrial.

The Mount Carmel Health System initially said the hospital received a report related to Husel's care on October 25, 2018. The hospital system removed Husel from patient care a month later. In that period, three people died "after receiving excessive and potentially fatal doses of medication" ordered by the doctor, the hospital said in a statement.

Husel was fired December 5, 2018. That same month, an attorney representing Mount Carmel reached out to the Franklin County prosecutor's office, launching an investigation into Husel.

During their initial conversations, the attorney said a doctor -- later identified as Husel -- was "administering doses of fentanyl at a level that they internally believed were inappropriate and not for a legitimate medical purpose," said Ron O'Brien, the Franklin County prosecutor at the time.

The investigation found the doses, which ranged from 500 to 2,000 micrograms, "were designed to hasten the death of the patients that were being treated," O'Brien said.

Fentanyl is an opioid used to treat patients with chronic severe pain or severe pain after surgery, according to the US Drug Enforcement Administration (DEA). The drug, about 100 times more potent than morphine, is also often used in end-of-life care to reduce discomfort in dying patients.

The DEA considers 2 milligrams of fentanyl, or 2,000 micrograms, to be a potentially lethal dose.