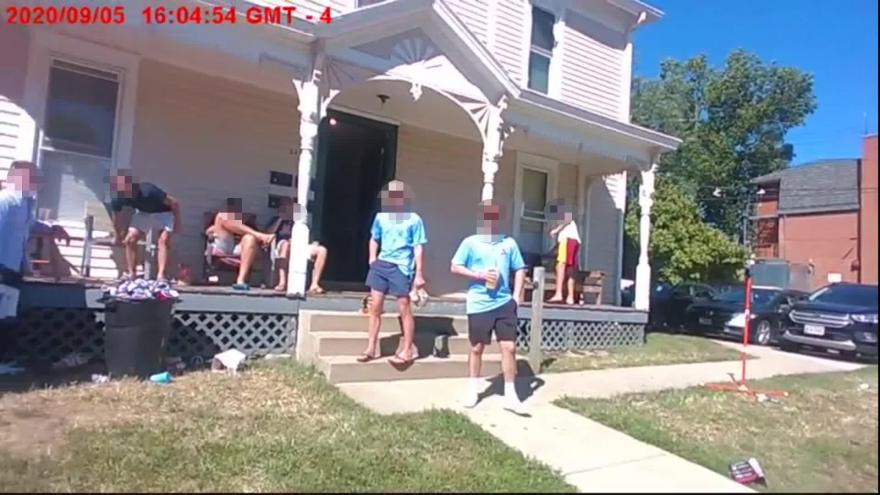 Body camera video from the Oxford Police Department shows a group of men gathered on the porch of a home near the university's campus on September 5. CNN has blurred the faces of those pictured to protect their identities.

(CNN) -- Six students at Miami University in Ohio were cited for violating a city ordinance on mass gatherings after they held a house party despite at least one of them testing positive for Covid-19, according to police records.

Body camera video from the Oxford Police Department shows an officer approaching a group of men gathered on the porch of a home near the university's campus on September 5, asking them who lives there.

"I'm assuming you probably know why I want to talk to you, right?" the officer asks.

One student replies that eight people lived in the house, and that at the time, about 20 people were inside. Both indoor and outdoor mass gatherings in Oxford involving people who don't live together are limited to 10 people, per the city's ordinance.

The officer tells the student to disperse the crowd gathered at the house, and eventually asks to see his ID. After scanning it, he calls the student over.

"I've never seen this before, there's an input on the computer that you tested positive for Covid?" the officer asks.

The officer asks the student whether he was supposed to be quarantining, and the student said that's why he was at home.

"Do you have other people here and you're positive for Covid? You see the problem?" the officer asks.

Other people at the house had also tested positive for the virus, the student told the officer.

"This is what we're trying to prevent, you know? We want to keep this town open," the officer says, with a sigh. "... So, you're not quarantining if you're mixing with other people."

Six people, five of whom lived at the house, were issued a citation, according to the police report. The Oxford Police Department told CNN in an email that fines for the citations start at $500.

Five of those cited are listed in Miami University's web directory as students. The police report indicates that the sixth person identified himself as a student who had moved in with his parents and was visiting for the weekend.

Colleges have struggled to curb parties

Miami University declined to comment on the matter, citing federal privacy laws, but added that students who violate quarantine orders or the city ordinance on mass gatherings would face disciplinary action.

The university announced on Tuesday that it would resume in-person and hybrid classes on September 21, after having had all virtual classes since August 17.

Colleges and universities across the nation have struggled to prevent students from throwing or attending parties in an effort to limit the spread of Covid-19. Clusters that have emerged on several campuses have been linked to fraternity parties.

The University of North Carolina-Chapel Hill and the University of Notre Dame are among schools that have had to shift to virtual classes, at least for a time, after cases cropped up days into the semester. Schools including New York University and Northeastern University have suspended students for violating safety protocols.